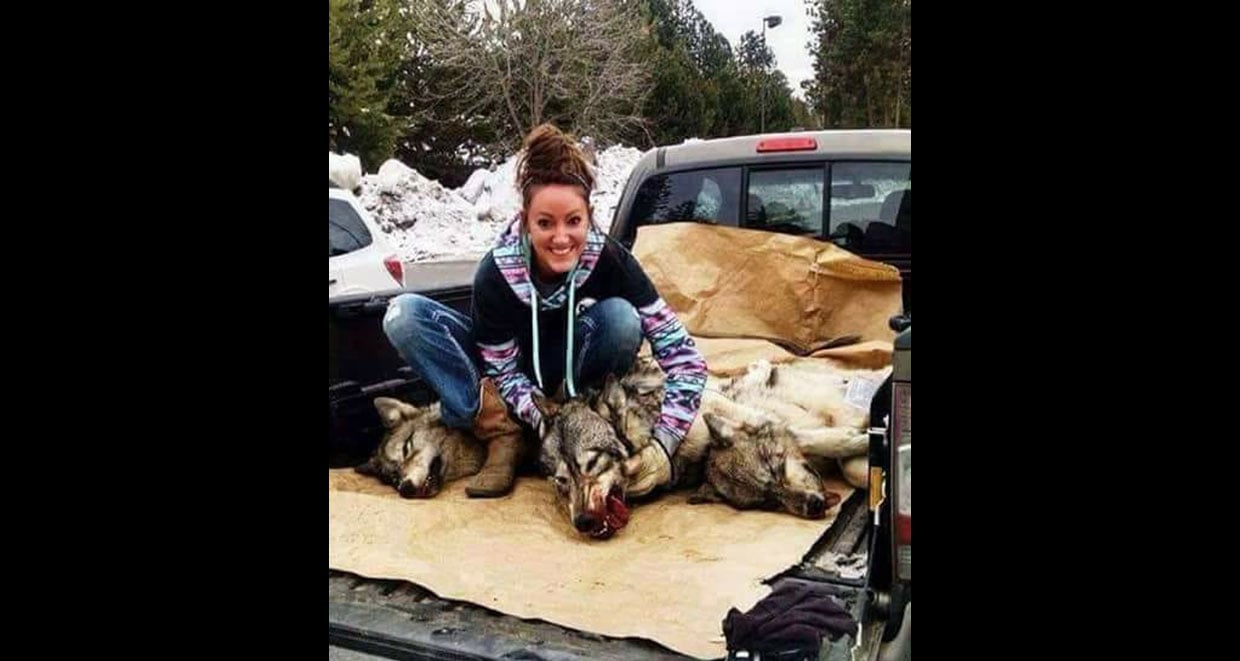 A shocking photograph has been making its rounds on the Internet that allegedly shows Natalie Palmer Botes, the daughter of the dentist who killed Cecil the Lion, posing with dead wolves. The photograph has invited more backlash for the Palmers, who have won no supporters for trophy hunting. But is Botes’ photograph real? As tragic as the entire image is, Natalie Palmer is being wrongly accused.

Another Palmer Guilty of Trophy Hunting?

The killing of Cecil the Lion was the biggest wildlife tragedy of 2015. People are still reminded and outraged by it, especially after the subsequent killing of Harambe the Gorilla in 2016. These incidents brought the issue of big game and trophy hunting sports to international discourse.

Walter Palmer is the American dentist who killed the South African lion, Cecil, in Zimbabwe. Palmer claimed that he had the permit for hunting, but it didn’t stop the global backlash.

During the media storm that followed Cecil’s killing, Walter Palmer’s recreational hunting hobby and family background were dug up. That’s when an alleged picture of his daughter, Natalie Palmer Botes, was discovered.

The extremely disturbing photograph shows a woman posing with dead wolves on the back of a pickup truck.

According to several social media users, the woman in the picture is Dr. Walter Palmer’s daughter. The picture has been circulating on the Internet well into 2018 and still creates shockwaves on social media today.

Several social media users claim that one of the three slain wolves was allegedly a mother of four little pups.

Animal lovers and conservationists are in an uproar over this image. Botes particularly angered even more people ever since she defended her father over killing Cecil the Lion.

Nonetheless, that woman in the picture is NOT Natalie Palmer Botes.

Snopes put an end to this uproarious picture after the scandal resurfaced. There’s no evidence that this picture is digitally altered in any way and there’s no way of telling who actually killed the wolves. It also can’t be said if Botes was associated with that hunting party in any way.

So, Who Is Natalie Palmer Botes?

Walter Palmer’s daughter is a ballroom dance champion. She is now the co-owner and instructor of American Classic Ballroom with her husband, Paul Botes.

At that time her father became the subject of global backlash, Botes posted a Facebook message, which many believe was in defense of her father.

She said, “Never look down on someone unless you’re helping them up.” Whoever it was directed to, Botes doesn’t have many fans on social media.

The alleged picture of her with the wolves only made the backlash worse. Even after three years, the photograph continues to be shared on the Internet.

The post by League Against Cruel Sports has received over 10K likes and has been shared over 6,500 times. Many have commented that killing innocent animals for thrills is unjustified unless it’s in self-defense.

But the woman posing with the wolves is not Natalie Botes. The identity of the woman in the picture is not known, but she bears a passing resemblance to Botes!

A statement from Botes’ dance studio confirmed that the woman in the viral photograph is not Palmer’s daughter.

The two women do look similar. But if you compare the pictures of the woman with the wolves and Natalie Botes’ from the studio’s website, there are some visible differences in their hairline and eyebrows, among other things.

A search going back to when the Palmers gained notoriety revealed that this image began circulating around the time when Cecil’s hype was waning. Walter Palmer was returning to his practice, which he had briefly shut down.

While the origins are unclear, the instigating image served to rile up more hatred against the Palmers. This image was shared repeatedly on the Internet, with insults and calls to “Name and Shame” Palmer’s daughter.

According to Snopes, when the name of Walter Palmer or Natalie Palmer wasn’t enough to drive attention, the claim about the mother wolf with four cubs was manufactured. There’s no way to confirm if the fact about the orphaned pups is true.

The Hype Over Cecil the Lion’s Death Continues

Walter Palmer first became known as a trophy-hunting pariah when he killed Cecil the Lion back in 2015. Known for his unique black-fringed mane, 13-year-old Cecil was something of a national treasure and a prized research animal of Oxford University.

He was reportedly lured out of the sanctuary and mortally wounded with an arrow from a compound bow. Conservationists say that the arrow possibly left Cecil writhing in pain for 10 hours before he succumbed to death.

Park officials found him skinned and without his head. His tracking collar was also missing.

The only bright side of this saga was the change in international trophy hunting laws and the protection of Cecil’s cubs.

Palmer reportedly paid $55,000 for the opportunity to hunt and kill Cecil. He claimed that he had the legal permit to do so.

His background only made things murkier. Palmer was convicted in 2008 for lying about poaching a black bear outside the permitted hunting area. He was also convicted for fishing without a license.

The Palmers’ home and his dentistry practice had a display of trophy animal heads. His wife reportedly had multiple fishing and hunting licenses, too.

Walter Palmer and his family went through unprecedented backlash. It got so bad that they reportedly had to go into seclusion until the matter died down.

Fresh hype over the death of Cecil has resulted again with the book, Lion Hearted: The Life and Death of Cecil & the Future of Africa’s Iconic Cats, which was released in April. The book is authored by Andrew Loveridge, a biologist at Oxford who had been studying Cecil for years until his death.

Palmer reportedly fears that this book will make him the target of animal rights activists again. His fears may not be misplaced since there are those who feel that Palmer escaped punishment.

While the hunting of animals is not condoned, it appears that unproven claims about the Palmers have been concocted to prevent this controversy from losing traction. In the past, there have been several blog posts alleging more of the Palmers’ misdeeds, which further put them in a bad light.