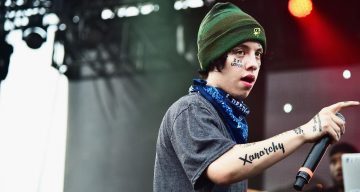 Many people recently took to Twitter and posted tweets claiming that 21-year-old rapper Lil Xan is dead! But is it really true? Did Lil Xan die? No! The news about Lil Xan’s death is not true, and we at EarnTheNecklace.com are here to tell you why!

Diego Leanos, the 21-year-old rapper known by his stage name, Lil Xan, is currently in the limelight. Not because of his rap music, but because several people are wondering if Lil Xan is alive or dead!

At least two people recently took to Twitter and posted that Lil Xan was found dead in Miami and the news spread swiftly. It birthed the rumor and people began to search for the truth. So, is Lil Xan dead?

Lil Xan Has Been Found Dead In Miami

Lil Xan Has Been Found Dead In Miami

However, the news appears to be fake. Lil Xan is very much alive, and there is no news about him being ill or dead.

In fact, Channel24News.com posted an article titled, “Lil Xan Dead At Age 21.” The date of the article is not mentioned, but it says that Lil Xan died at around 2:08 a.m. in a car crash while under the influence of marijuana and “lean”, which is a mix of jolly ranchers, sprite, and codeine.

However, the top of the article reads, “You Got Owned,” and further states, “You’ve Been Pranked!” This means that the article is fake, and Lil Xan is very much alive.

Although we know the news about Lil Xan being dead is fake, we can’t ignore the fact that he is going through a tough time.

On Saturday (April 7), the 21-year-old rapper posted a series of tweets that suggest he is probably going through something serious.

In one of the tweets, Lil Xan mentions being heartbroken and having anxiety. He also said that he is a human being and is just like everybody else.

Everything I talk about is real when it comes to being heartbroken or having anxiety that makes me feel like im gonna die everyday ! That’s real shit,I’m a human being no better than anyone else on this earth,I love you guys to death and I consider us one big family ?

In the next tweet, Lil Xan mentions that he is going through some things mentally. But he said that he will fight it because he wants to prove to his fans that they are not alone, no matter what is going on in their lives.

I’m not gonna lie I’m really going through some shit rn mentally but I’m gonna push through this because I wanna show y’all that you are not alone,no matter what is going on in your life don’t feel like you are alone!Im right here next to you going through the same shit

Lil Xan was supposed to do a show in Dallas but canceled it because of a personal problem and travel issues. He also said that he was planning a free show for everybody in Dallas.

Dallas I love you to death but I’m sorry I couldn’t make it due to a personal conflict and travel issues,I love you guys to death and am currently planning a free show for everyone In Dallas because i love you even if hate me rn

Many people were upset when Lil Xan canceled the show. But his fans took his side and said that they understand what he is going through and support him no matter what!