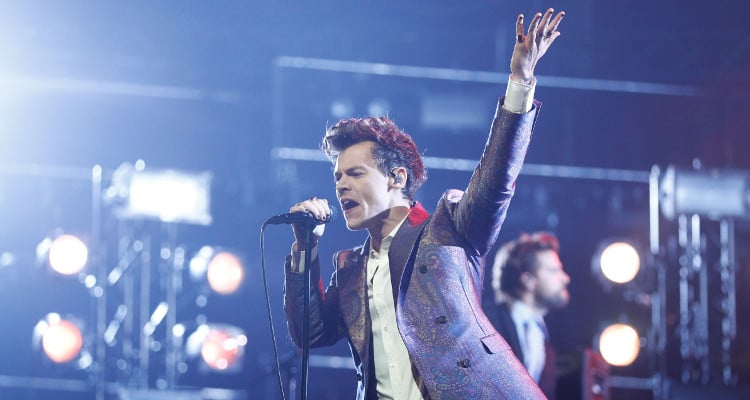 One Direction fans speculate Harry Styles is gay or bisexual after he kissed James Corden in Carpool Karaoke. Speculations of his sexuality have been on since fans believed he was dating bandmate, Louis Tomlinson when One Direction was active.

Harry Styles filled in for James Corden on The Late Late Show last night (December 12). But before that, they enjoyed some Carpool Karaoke to celebrate Christmas. Harry Styles and James Corden capped off their rendition of “Santa Claus is Coming to Town” with a lip-lock, which only revived speculation about Harry Styles’ sexuality. Is Harry Styles gay? Let’s take a look at what Styles had to say.

Is Harry Styles Gay or Bisexual?

James Corden couldn’t film the latest episode of The Late Late Show because his wife went into labor. Corden and his wife, Julia Carey welcomed their third child, a healthy little girl on December 12. While he was absent, he called one of his best buds to fill in for him on the show. Enter, Harry Styles.

“I was sitting at home two hours ago in this suit, obviously,” said Styles. “I got the call Jules was going into labor so James naturally called the funniest man he knew… he obviously wasn’t available.”

Styles and Corden go way back. He’s appeared on his show with his band before and the last time he was there, performed every day for a week while promoting his self-titled solo album. Before taking over Corden’s hosting duties, the beloved pop star also carpooled to work with Corden for a holiday special of Carpool Karaoke.

The Christmas edition of the popular late night segment included several celebrities like Fifth Harmony, Miley Cyrus, Bruno Mars, Pink, the Foo Fighters, Katy Perry, and more. Styles and Corden topped off their karaoke session with a kiss! In case you were wondering, there was no mistletoe.

While taking over hosting duties, Styles also addressed the smooch saying, “I would like to take the opportunity to announce that… we will also be having a baby!” As if we can’t love Harry Styles anymore than we already do, his sarcastic wit is the icing on the cake!

Labels Are for Cans

For the better part of their One Direction days, Harry and Louis Tomlinson have been linked together. Fans came up with their ship name, Larry Stylinson to go with their various fantasies between the two men.

But the 23-year-old has also had a very public relationship with Taylor Swift. Their breakup inspired both of them to allegedly write songs on their relationship. Before Swift, he dated The Xtra Factor host, Caroline Flack, who is 14 years his senior.

Whatever fans believe and media reports, Styles is not one for labels. When talking about Miley Cyrus identifying as pansexual, he opened up about defining his own sexuality saying, “No, I’ve never felt the need to really. I don’t feel like it’s something I’ve ever felt like I have to explain about myself.”

He was all praise for Cyrus being open about her sexuality, though. “Being in a creative field, it’s important to be progressive,” he said, adding, “Everyone should just be who they want to be. It’s tough to justify somebody having to answer to someone else about stuff like that.”

His fans have been trying to pin down his sexuality for years. In one interview, he was even asked point blank if he was bisexual! To that, he gave a clear, “I don’t think so. I’m pretty sure I’m not.”

Tomlinson himself addressed the rumors about his supposed relationship with Styles. “People can believe what they want to believe,” he said but added that sometimes fans’ fantasies cross a line and they become disrespectful to people he loves, like his girlfriend, Eleanor Calder. “I think it’s one of these things that people love to buy into, but in reality, obviously there’s no truth to it. Obviously.”

But the rumors about the “Only Angel” singer’s sexuality continue to spin. Sometimes, he even fuels them himself! During an interview with his bandmates, they were asked what favorite traits they look for in a woman. Liam Payne answered, “Female, that’s a good trait.” But Styles with his long mane countered, “Not that important.” And of course the Internet lost it.

Whatever be Harry Styles’ sexuality, reports claim he is dating 27-year-old Victoria’s Secret model, Camille Rowe. He reportedly took a shine to the French stunner at last year’s Victoria’s Secret Fashion Show and they have been spotted together on a few dates.

There was talk that they would take their romance public at the 2017 show in November, where Styles performed. Too bad Rowe didn’t make the cut this year while Styles rocked the runway with other Angels!

Since he’s not one for labels, Harry Styles’ sexuality may forever remain a mystery. Until then, keep fantasizing, fans—and take a look at his hilarious Carpool Karaoke below!