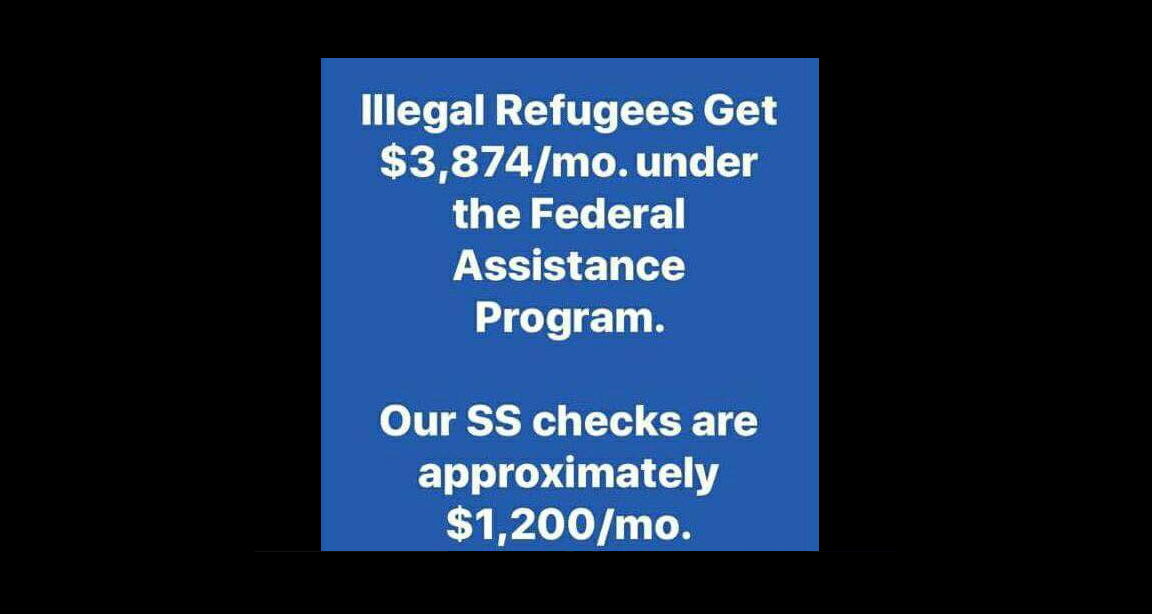 Illegal refugees in the US receive $3,874 a month and benefits through the Federal Assistance Program.

A Facebook post claims that illegal refugees in the U.S. get $3,874 a month through a federal assistance program. The amount is reportedly a lot more than what U.S. citizens get through social security. So, do illegal immigrants get federal assistance? Keep reading to find out!

What Are Illegal Refugees?

A Facebook page posted an image with the caption, “Illegal Refugees get $3,874/mo. under the Federal Assistance Program. Our SS checks are approximately $1,200/mo.”

This post has received over 3.3K likes and more than 100K shares. The page in question appears to be in support of President Trump.

The comments to this post are in a similar vein.

Most comments contain angry rhetoric against immigrants in the U.S. There are also those who explain their financial troubles stemming from a meager social security check.

However, it would be wrong to target immigrants on account of this post, simply because it’s false. And the reasons are many.

For starters, the opening line mentions “illegal refugees.” That, in itself, is a clear misnomer.

There’s no such thing as an “illegal refugee.” Refugees are people displaced from their home countries for multiple reasons and seek asylum in another country. Refugee status is protection granted by the state to displaced people.

To gain this status, the immigrant must go through a refugee status determination process. Every country has its own system to grant refugee status to an individual or a group, and it is legal protection.

It can be said that the contentious Facebook post is referring to immigrants in the U.S. in general. But it doesn’t make it any less false.

A Case of Mistaken Country

Now that we’re clear that a refugee is not an illegal immigrant, let’s move on to the so-called federal assistance program.

If you’ve been keeping track of your Internet hoaxes, this claim might not seem so new to you.

The claim that illegal refugees get over $3,800 a month through federal assistance came up in 2017, too. But at that time, it was about the U.S.’ northern neighbor, Canada’s refugee policy.

The document in the post was authentic. But the claim that one refugee gets paid more than Canadian pensioners is false.

A closer look at the document revealed that the $3,800 payment is not for one person, but an entire family of five. Furthermore, the monetary benefits listed in the documents are a onetime resettlement payment and not monthly.

Snopes.com explained the misrepresentation of facts in the document when it viral back then. Refugees can avail the benefits under exceptional circumstances and depend on the size of the family.

The claim referring to Canada was debunked. But the U.S. has had its fair share of similar claims.

The same statement it has been rehashed in May 2018 regarding the U.S.’ refugee policy.

The U.S. doesn’t have a federal assistance program for refugees. So, if there’s no program, then there’s no monthly payment of $3,800 to refugees!

Time and again, unproven claims crop up that refugees and immigrants get paid more than veterans, social security dependents, and legal citizens. And social media is rife with anti-immigrant discourse and claims that refugees exploit the public welfare system at the cost of American citizens.

A few years ago, there was a claim that refugees get paid double the amount retired military vets get. This statement has been proved erroneous, but is still provocative.

Taking advantage of the benefits of these programs has its own limitations and exceptions.

To be eligible for RCA, the applicant must have resources less than $1,000. Upon receiving approval for this program, a family of two without a source of income could get $420. If the family’s income exceeds $839, they will no longer receive RCA.

The budget stipulated for refugees will depend on the size of the family.

Refugees have other non-cash benefits like employment services, vocational training, daycare services, English-learning programs, and more. But they are subject to several restrictions with regards to their existing resources and duration of stay. Their eligibility is also subject to gainful employment.

So, immigrants and refugees are not draining the welfare programs of money that would otherwise go to the social security fund. It would be inaccurate to say that migrants are stealing from American citizens.

Do Illegal Immigrants Get Welfare?

Regardless of immigration status, there are federal programs that help new arrivals in the country. And they could be refugees or undocumented immigrants.

There are still factions in the immigration debate that instigate public sentiment with falsehoods. But it has been proven time and again that even undocumented immigrants don’t exploit the public welfare system.

Given that refugees require documented proof of their status, an undocumented refugee cannot take advantage of most federal provisions like Medicaid and food stamps.

Bill Clinton signed the Illegal Immigration Reform and Immigrant Responsibility Act of 1996. It stipulated that even legal immigrants can’t take advantage of federal benefits unless they’ve lived in the U.S. for at least five years.

They do have some benefits like access to public school education. But much of the burden to support migrants is disproportionately placed on state governments.

Statistics have shown that most undocumented immigrants and their employers contribute around $12.0 billion a year to the social security trust fund. Indeed, immigrants are ineligible for federal welfare even though they pay taxes.

And even though they are not eligible for Medicare or Medicaid, the U.S. government doesn’t discriminate in times of emergency. Medical professionals are expected to treat any case of an emergency regardless of the patient’s immigration status.

Legal and illegal migrants have been vilified by grossly exaggerating their access to federal welfare. But the evidence that they are a minor burden on the public welfare system is in clear contradistinction to anti-immigration claims.

So, the claim that illegal refugees receive over $3,800 a month through federal assistance is false!