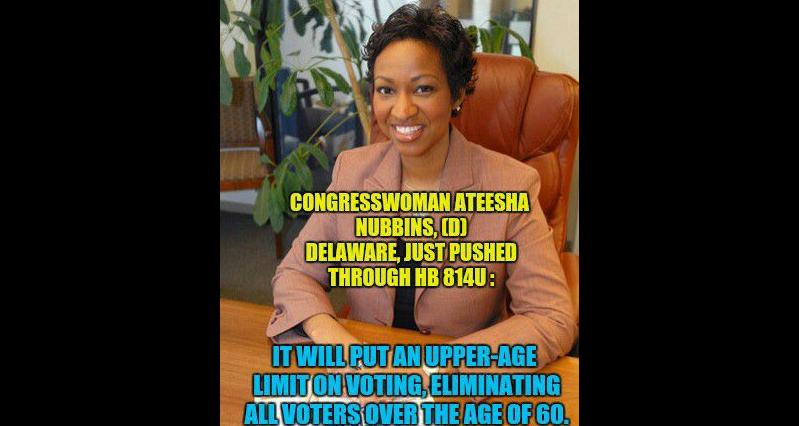 Delaware Congresswoman, Ateesha Nubbins pushed for House Bill 814U, a bill that bars citizens above the age of 60 from voting.

A Facebook post alleges that a Congresswoman from Delaware named Ateesha Nubbins has pushed for House Bill 814U. The purported bill would put an upper age limit on voting, barring anyone over the age of 60 to vote. This piece of news, scandalizing as it sounds, is not true.

Is There a Bill by Ateesha Nubbins?

A Facebook page called “America’s Last Line of Defense” shared a post that read, “Congresswoman Ateesha Nubbins, (D), Delaware, just pushed through HB 814U: It will put an upper-age limit on voting, eliminating all voters over the age of 60.” 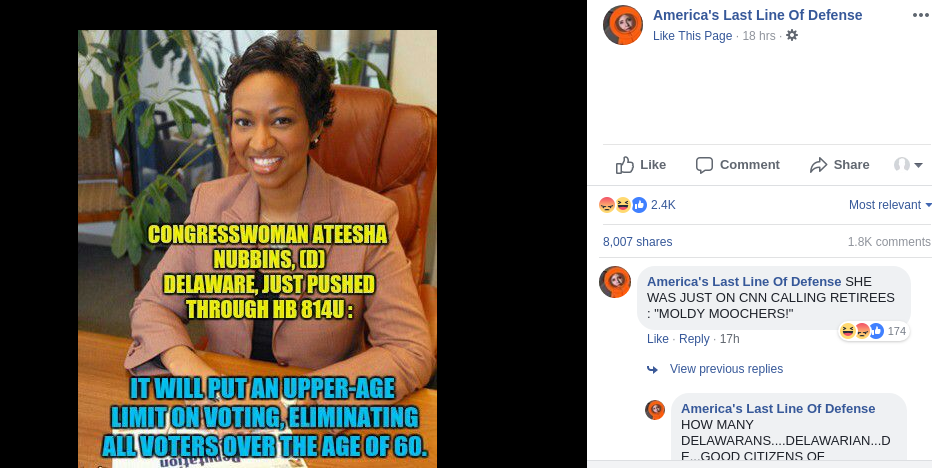 The post got a huge response, with over 2.4K likes and more than 8,000 shares! Most comments were disparaging the alleged move to strip older citizens of their voting rights.

For starters, “America’s Last Line of Defense” is an entertainment site. It gives a full disclaimer that nothing on the page is real and aims to provide an “entertaining haven” from real news.

The page posts, “a collection of the satirical whimsies of liberal trolls masquerading as conservatives.” Everything posted on this site is expected to be taken with a sense of humor.

In fact, the person added to the post about Ateesha Nubbins, “SHE WAS JUST ON CNN CALLING RETIREES : “MOLDY MOOCHERS!”

But a search revealed there is no congresswoman named Ateesha Nubbins! (Some speculate that the name itself is some sort of witty wordplay.) The only elected female official from Delaware is Rep. Lisa Blunt Rochester. And the meme that is featured on the site is actually of a woman named Laurie Robinson Haden, a lawyer who serves as the senior vice president and assistant general counsel at CBS Corp. in New York.

While there is no Ateesha Nubbins, there is a bill similarly named HB 814—several in fact. But none of them have anything to do with voting.

House Bill 814, which was introduced in the North Carolina General Assembly, recommends changes to the Planned Community Act. Another HB 814 in the Georgia General Assembly is related to the salaries and general provisions to coroners and deputy coroners.

Going through the bills introduced in the Delaware General Assembly during the 2016-2018 tenure reveals there’s no such bill as 814U under consideration.

The closest legislation regarding voting in Delaware is related to Senate Bill 127,  which was last discussed on April 25, 2018. This bill corrects an error in Delaware law that previously allowed those under 18 years of age to vote in final-stage elections.

The Senate Bill does not mention anything about an upper-age limit, either.

Rest assured, there’s no legislation that would make older citizens ineligible to vote. This one is 100% false!