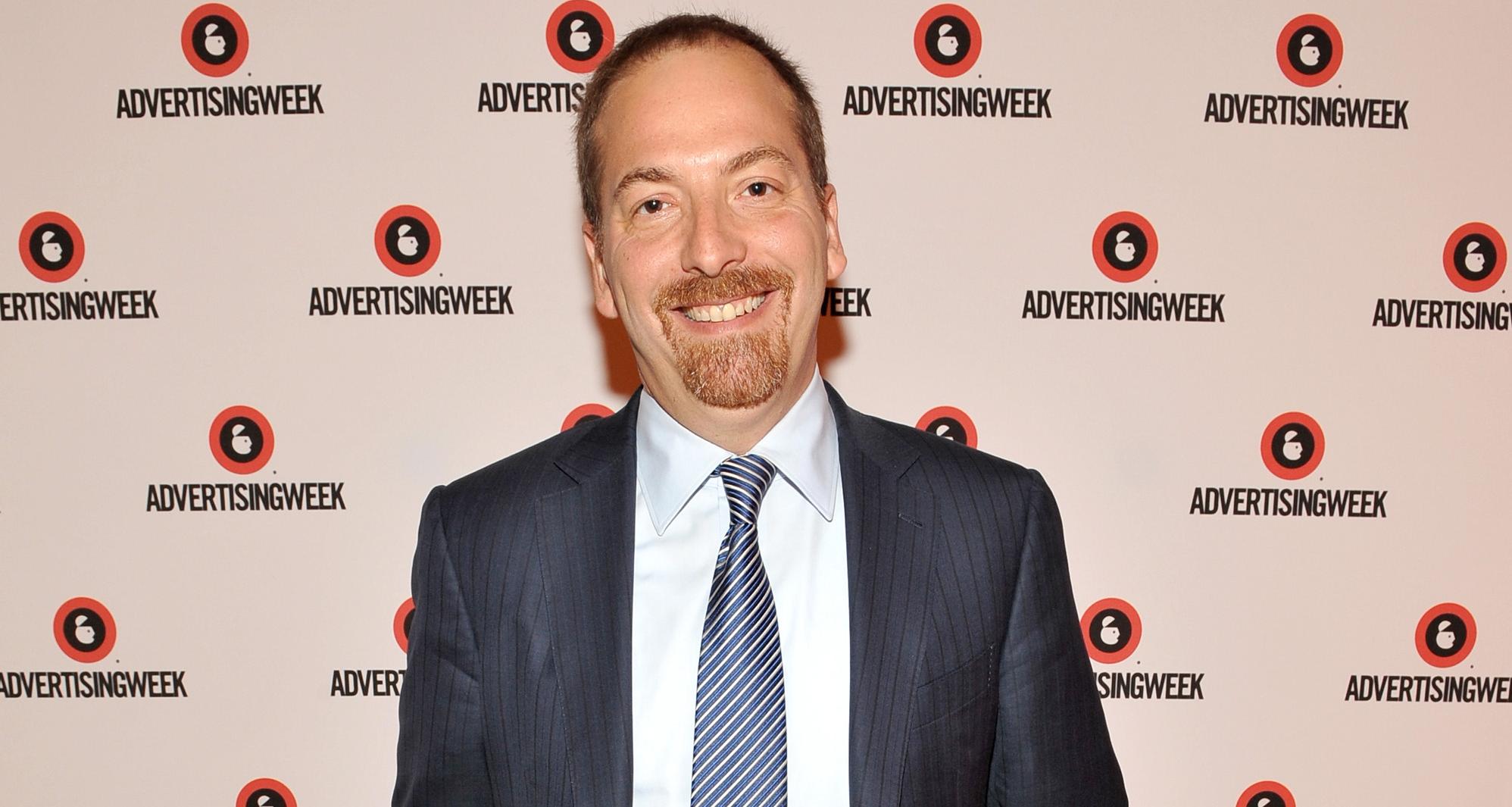 President Donald Trump called NBC journalist Chuck Todd “sleepy eyes,” and it raised huge controversy. The term “sleepy eyes” is an old derogatory reference to Jewish people and is considered anti-Semitic. The real question is whether Chuck Todd is of Jewish faith or not. We at EarnTheNecklace.com decided to get to the bottom of this affair and answer this question.

Even though Donald Trump has been calling NBC journalist Chuck Todd “sleepy eyes” from 2012 onward, it’s only now that the controversy over it has erupted.

On the morning of April 22, 2018, President Donald Trump tweeted that “Sleepy Eyes Chuck Todd” was wrong in his judgment that America had given too much, while North Korea had only given minor concessions in the talks between the U.S. and the renegade nation.

Sleepy Eyes Chuck Todd of Fake News NBC just stated that we have given up so much in our negotiations with North Korea, and they have given up nothing. Wow, we haven’t given up anything & they have agreed to denuclearization (so great for World), site closure, & no more testing!

Todd had earlier criticized Trump, saying that he had given away too much on America’s behalf while the North Koreans hadn’t given any concessions of high value in their talks.

While Trump had called Todd “sleepy eyes” several times in the past, nobody had taken any exception to it (including Chuck Todd himself). Many had assumed that this was just another instance of Trump giving a nickname to a person and popularizing it with frequent usage.

A Dangerous Term to Use

“Sleepy eyes” is an anti Semitic term that was and is stilled used by neo- nazis groups relating to “how to spot a Jew.” Donald Trump just used anti semitic terminology against a Jewish reporter. Why are people not talking about this?! https://t.co/cy54ZEE92v

This time, however, there was a difference.

Sarah Chadwick, a student of Marjory Stoneman Douglas High School, saw the tweet and saw something extremely disturbing in it.

According to Chadwick, the term “sleepy eyes” is an anti-Semitic term that was and is still being used by Neo-Nazi groups regarding “how to spot a Jew.”

Chadwick accused Trump of using anti-Semitic terminology against a Jewish journalist, Chuck Todd, and questioned how he was getting away with it. 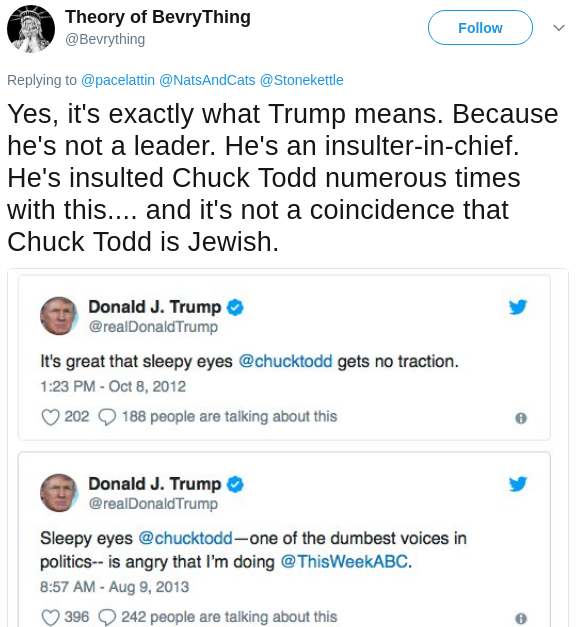 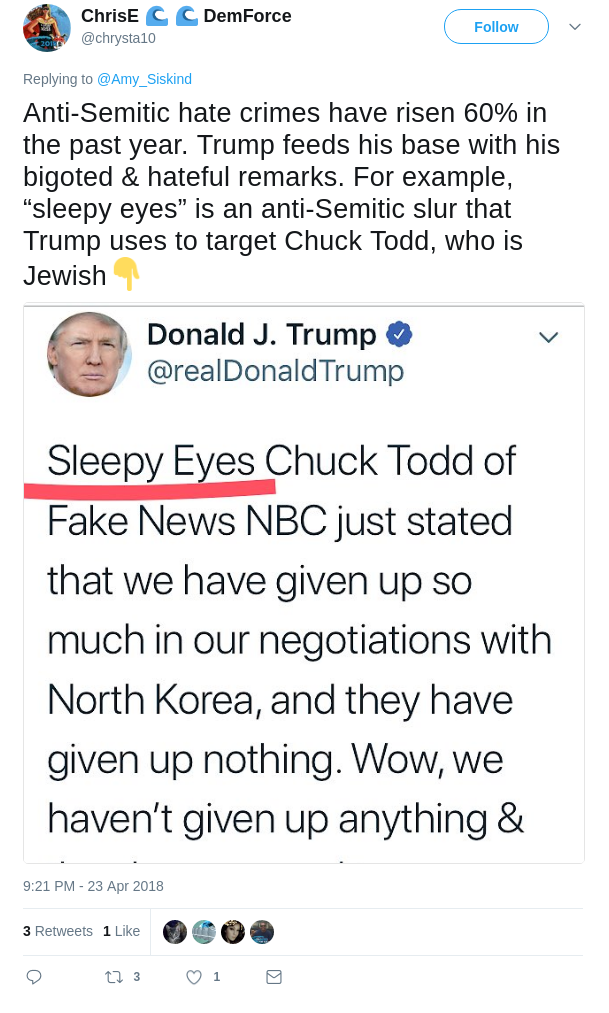 Chadwick tweeted this on the morning of April 23, 2018. And since then, it has ballooned up into a huge controversy, with President Donald Trump smack in the middle of it.

The post has gone viral, and people have taken to social media in a big way to express their opinion on this matter.

Many had written that the term “sleepy eyes” is indeed a racial slur. It was used by the Nazis in Germany when Hitler was in power. 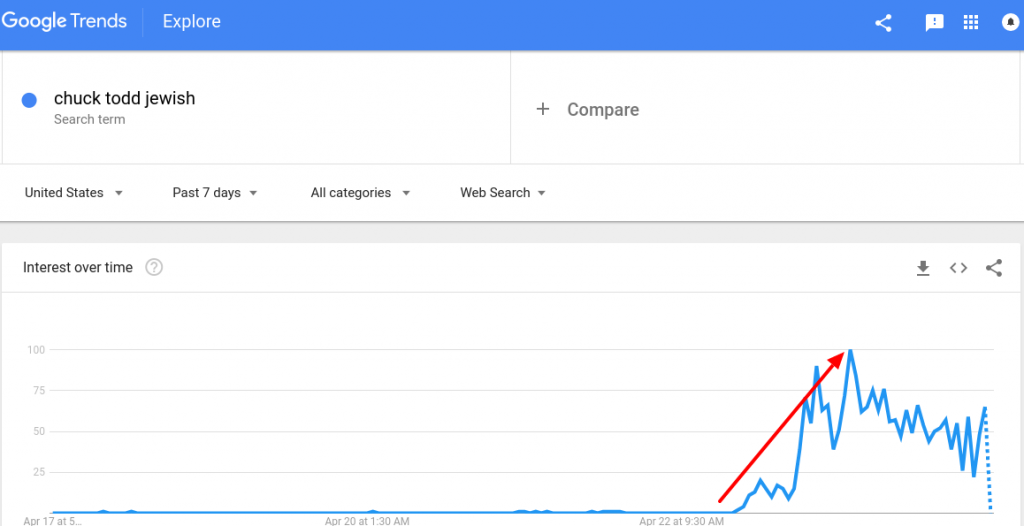 According to reports, it is. And at the crux of this controversy is the question about Chuck Todd’s ethnicity. Is Chuck Todd Jewish in the first place?

If he is Jewish, then comes the question of whether Trump used this term deliberately or if he made an honest mistake not knowing that this was a slur.

The funny thing is that Todd himself was unaware that this was an anti-Semitic term until now when this controversy has arisen!

So, is Chuck Todd Jewish?

According to several people and documents, he is. And as per the website, InterfaithFamily.com, which supports interfaith families exploring Jewish life, Chuck Todd’s mother was Jewish, but his father wasn’t.

Chuck Todd was raised Jewish and adheres to the Jewish faith.

According to another source that follows Jewish personalities and Israel related news, Chuck Todd is a Reform Jew.

It’s obvious from the above sources that Chuck Todd is Jewish, as his mother was Jewish, and he was raised Jewish, as well.

Whether or not Trump knew the “sleepy eyes” meaning before calling Todd the derogatory term is another question altogether.