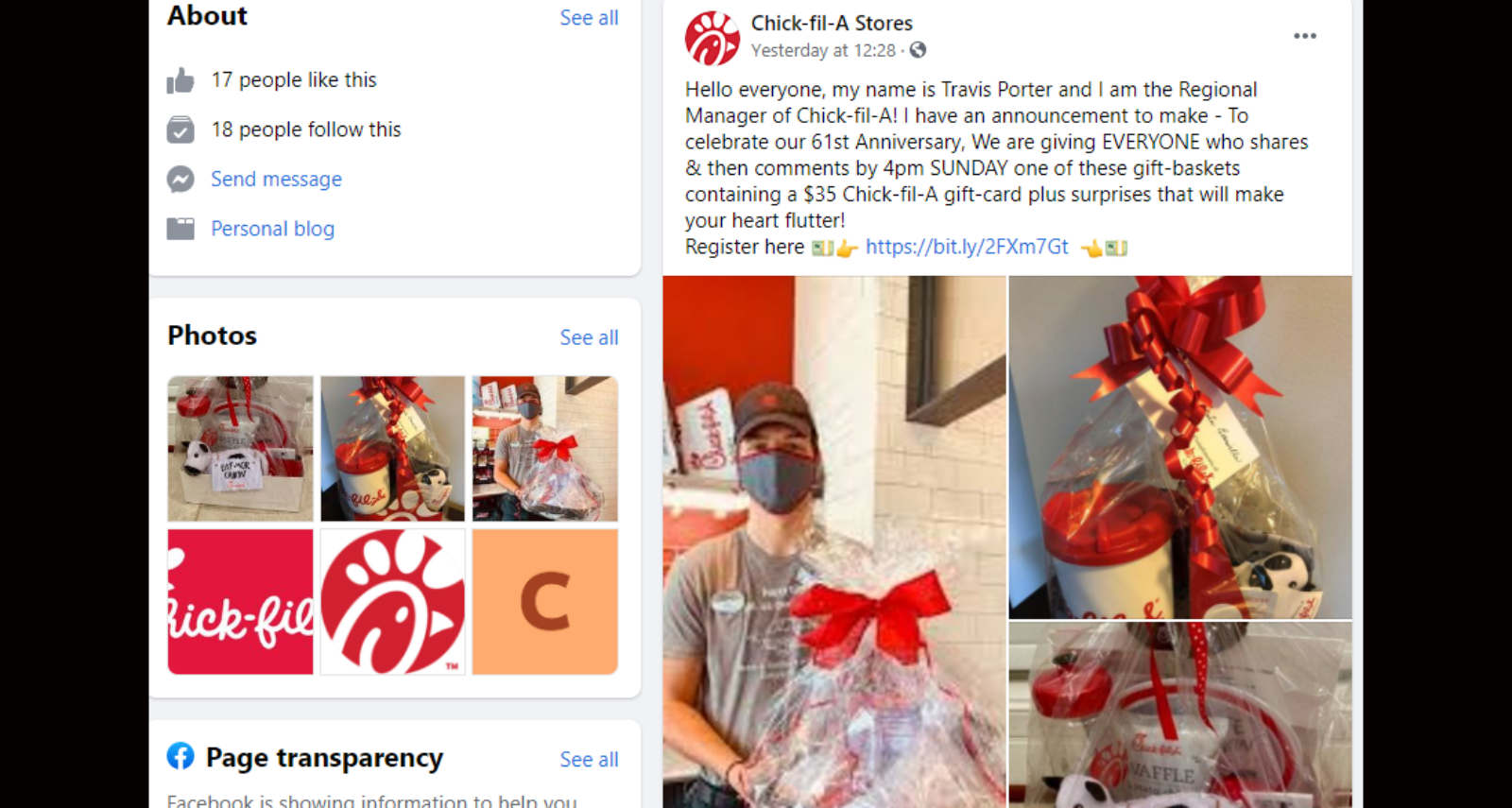 Chick-fil-a is giving out gift baskets on its 61st anniversary.

An online post supposedly from Chick-fil-A is offering a chance for everyone to win special gift baskets. It’s asking Facebook users to share the post to win the prize up for grabs. The post also comes with a link to register yourself for this promo offer. While many are sharing this post and trying to win a gift basket, others are naturally skeptical. Should you get a piece of this Chick-fil-A promo? We’d say you’re better off without it.

The Facebook page “Chick-fil-A Stores” made a post on October 25 about a tempting offer. The post read as follows:
“Hello everyone, my name is Travis Porter and I am the Regional Manager of Chick-fil-A! I have an announcement to make – To celebrate our 61st Anniversary, We are giving EVERYONE who shaᴦes & then comments by 4pm SUNDAY one of these gift-baskets containing a $35 Chick-fil-A gift-card plus surprises that will make your heart flutter!”

The post included a picture of the supposed Travis Porter holding the alleged gift basket. It also had a link for prize-seekers to register.

The post is getting attention online, and many have even shared it. Others are also commenting under this post.

Scam Detector is a site that specializes in getting to the bottom of suspicious online scams. It tested out this Chick-fil-A promo and its registration link.

After clicking on the link, Scam Detector stated, you are redirected to a page that asks you for your email and to create a password. It then seeks your credit card information.

Scam Detector has tagged this as a phishing scam, and you should not get lured by it.

Other red flags for this post include the page itself. It’s not the official Facebook page for Chick-fil-A, which had not posted anything since October 23 (two days before this scam post was made). As of this writing, the fake Chick-fil-A page is less than a day old.

Moreover, it’s unlikely that a regional manager would be in charge of promoting a national promo campaign. Also, Chick-fil-A is not celebrating its 61st anniversary. It was founded in May 1946 and is over 70 years old in 2020.

This isn’t the first scam of this kind. There have been similar scams involving Subway and other gift card-offering chains. Unless these posts come from official sites, social media users should steer clear of any offers.