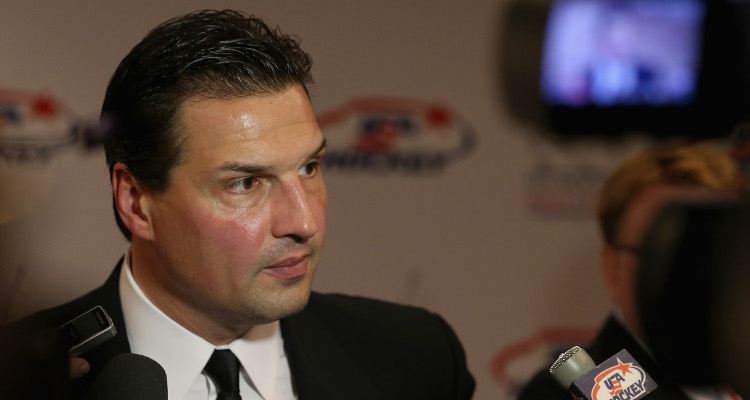 Eddie Olczyk is a former professional hockey player who is now a coach and sports analyst on TV. He recently revealed that he is battling colon cancer for which he is undergoing treatment.

Eddie Olczyk has a high-flying career —literally. He often traveled for NHL games and his work still leads him to travel across the country. Between working as an analyst for NBC, the Chicago Blackhawks, and NHL on Versus as well as a few other broadcasts, he accumulated many frequent flier miles!

His tiring flight schedule throughout his career had an upside. It was on a flight with the Chicago Blackhawks, who picked him in 1984 NHL draft, that he met Diana. He didn’t elaborate on their love story, but obviously, it worked out well for this longtime married couple.

Diana and Eddie Olczyk are parents to four children. Their daughter, Alexandra is a student at the University of Alabama. Their sons, Nick, Tommy and Eddie III followed their father’s footsteps.

Eddie III played in the Southern Professional Hockey League with Bloomington Thunder. He worked on the coaching staff of Niagara University’s hockey team and is currently a coach at Bemidji State University, UMass. Tommy is a nationally ranked senior forward for Penn State. Their youngest son, Nick, plays for the South Shore Kings of the U.S. Premier Hockey League and plays for Colorado College.

Nick once elaborated how hockey crazy the family is, “We have a plaque, actually, in our house right when you walk in the foyer that says, ‘We interrupt this family for hockey.’ I think that’s a perfect slogan if you can quote our family.”

The Olczyk family didn’t have it easy when Eddie played in the NHL. Every time he was traded or signed to a new team, the family had to pick up and move to a new home. The family lived in Winnipeg, Los Angeles, Pittsburgh, and Chicago. No matter where they lived, the boys didn’t let go of their hockey dreams. Since making his sports broadcast debut, traveling between cities is still a part of Eddie Olzcyk’s schedule.

And with their family, was always Diana. She would take their sons to their hockey games and trips, carrying three bags of hockey gear, and tied their skates. “What we’ve gone through transitionally, moving, new schools, finding doctors, friends, that’s crazy. Having grown up in the hockey aspect of it, you just watch them all how they grow on the ice and as human beings,” said Diana.

Among the three brothers, the family agrees that Nick is the best hockey player, second only to their father. But Tommy, an accounting major with a 3.7 GPA, is the brains of the family and they agree he gets it from their mom. According to Diana, Tommy gave as much as attention to books as pucks from middle school, throughout high school and carried a 4.0 GPA to Penn State.

#4. Eddie Named a Horse after His Wife

An avid enthusiast of thoroughbred horse racing, Eddie Olczyk also served as guest commentator at major horse racing events for NBC Sports. He owned a thoroughbred he named Diana O., after his wife. He wanted the opportunity to join the winner’s circle with Diana O. one day. But it was not meant to be.

About 25 years ago, Diana O. ran in the Pocahontas Stakes while Eddie was in Winnipeg for the hockey game. Before he watched the late telecast of the race on TV, his wife called to tell him some grave news about her namesake thoroughbred.

Diana O. was in the lead at one point and it looked like she could win. But before the horse made it to the finish line, she suffered an injury. Eddie preserved the puck from the game he played that day and wrote “Diana O.” on it. However, it took him a long time to return to loving horse racing again. The couple now owns four thoroughbred horses and he’s also a big advocate of the safety of the animals.

Eddie Olczyk released a statement saying he was diagnosed with colon cancer. He took a break from his broadcast activities and is currently receiving treatment. He hopes that with “the support and encouragement from my family, the Chicago Blackhawks organization, NBC Sports and all my friends and fans” he will be back in the broadcast booth soon.