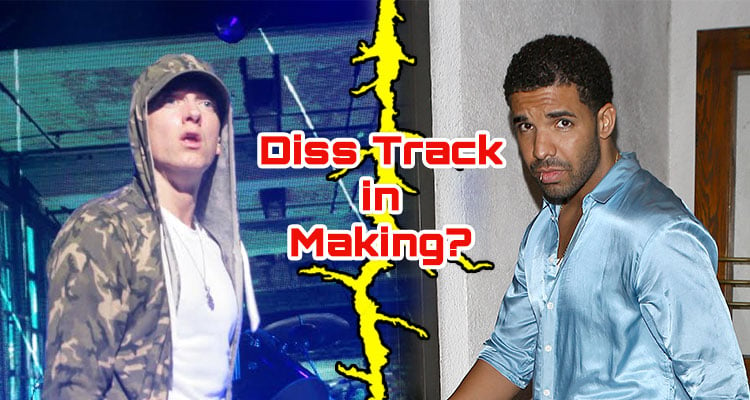 It seems the moment has come for rap fans to enjoy some new shade thrown from two of their favorite artists. Is Eminem about to diss Drake? That is the question in everybody’s mind after rumors suggest that Drake and Eminem may be preparing for a rap battle.

If you are searching for terms like, “is Eminem working on diss track?”, “Eminem Drake,” and “Drake diss Eminem” then you have come to the right place because we will be able to answer the question that everyone is dying to know the answer to; is Eminem about to diss Drake?

Drake is diligently working on his latest tracks, and his recent spat with Meek Mill has earned him even more fans. However, sources are speculating that Eminem is planning to release a track which will be aimed directly at Drake.

Hot 97’s Ebro Darden spoke about Eminem and his plans to release a diss track aimed at Drizzy. He announced this on Wednesday (August 3) on his radio show. “We talked about Joe Budden,” said Ebro. “He was laughing.” He explains that the two were talking about the DMs sent to Joe Budden by Drake, which featured a crying face. After listening to the conversation between Ebro and Drake, Joe Budden was quick to respond; he said, “everything about Drake’s behavior is lame.”

Later on, Ebro dropped the major bomb saying that Eminem is preparing a diss track toward Drake. He said, “I told Drake that I heard the rumor was Eminem was going to gear up to come after him and he laughed. He was like, ‘That’s not gonna happen.’ He’s like, ‘He’d never do that. And if he did, I got something for him, too.”

Eminem and Drake have worked together previously in the year 2009. They released “Forever”, which also featured Lil Wayne and Kanye. However, Drake released more major hit albums and surpassed Eminem’s fan following.

Eminem’s net worth is no less and even after so many years, his net worth is still a whopping $190 million. Eminem is not shy when it comes to releasing diss tracks. He even went on and released tracks slamming his own mother, his ex-wife (Kim), Mariah Carey, and Ja Rule. Is Eminem about to diss Drake? For that, we need to keep an eye out for the release of any new singles or albums, specifically aimed at Drake.

Ebro speaks on his recent convo with Drake about Joe Budden & if Eminem were to diss him pic.twitter.com/BFNMOULkWs

Although Ebro did not mention the source of the rumor or who told him, he did talk about the whole debacle on his radio show. Eminem is rumored to be dropping a single pretty soon, but nobody knows what it will be about. Even if he is not planning to pin it against Drake, we cannot wait for him to release the new song and dance to his tunes.

What do you think about the whole Eminem Drake rumor? Do you think it is true? If yes, then who do you support? Let us know your opinions in the comment section below.