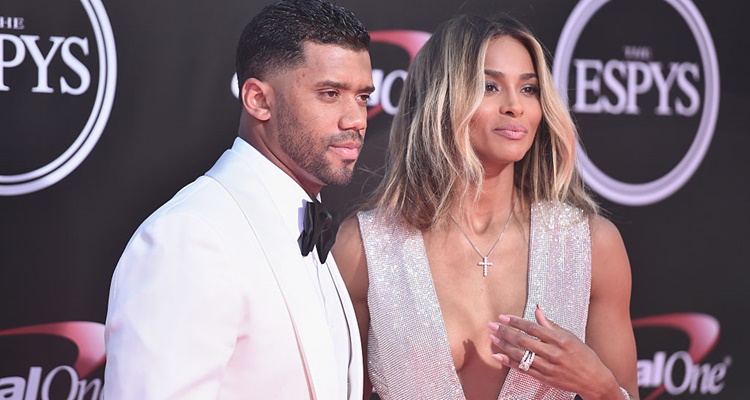 Singer-songwriter Ciara surprised fans on her 31st birthday with news of a double celebration: she and her husband of three months, Russell Wilson, are expecting their first child!

Ciara’s birthday this year will definitely be a memorable one. The talented singer and dancer will be welcoming her first child with husband, Seattle Seahawks’ Russell Wilson. Excited fans of the beautiful star are searching the Internet to confirm whether Ciara is pregnant by her husband, or someone else, as the two have only been married a short while. Don’t go anywhere else because we’ll tell you everything you need to know about Ciara and Russell Wilson, including Russell Wilson’s age.

The “1, 2 Step” singer sent her fans into a frenzy when she was photographed by the paparazzi dressed in baggy clothes earlier this month. She married her 27-year-old quarterback husband in a dreamy destination wedding at the Peckforton Castle in Cheshire, England on July 6, 2016. The attractive couple began dating in early 2015 and announced their engagement on March 11, 2016. Apparently, the loved-up duo remained celibate until their wedding night!

This will be Ciara’s second pregnancy, as the hitmaker is already mother to a two-year-old son Future Zahir Wilburn, with ex-fiancé rapper Future. The pair were engaged from October 2013 to August 2014 with reports claiming that Future cheated on Ciara, while he maintains that the couple just drifted apart. Ciara fueled pregnancy rumors when she began sporting strategically loose-fitting outfits to several public events, most recently during her appearance on Live With Kelly! in New York City.

The “Goodies” singer took to Instagram to share the fantastic news with her 14 million followers. Thousands of fans blessed her with good wishes on her post—a photo of her snuggling with her husband, while he tenderly placed his hand on her baby bump. Ciara’s caption read, “On this special Birthday I received an abundance of love from friends and family… and I’m excited to Finally share one of the Greatest Gifts of All that God could give.”

On this special Birthday I received an abundance of love from friends and family.. and I’m excited to Finally share one of the Greatest Gifts of All that God could give… ????????????????????☺️❤️

Last year, Ciara and Wilson stated their desire to start a family. While Ciara proclaimed that she “definitely” wanted more kids, Wilson echoed her thoughts with, “Down the road, I would obviously [want kids]. She does too and hopefully, God willing, as long as they’re healthy, that’s what we pray for and whether it’s a boy or girl, who knows but we’ve got some time for that.” It looks like the couple has got what they asked for!