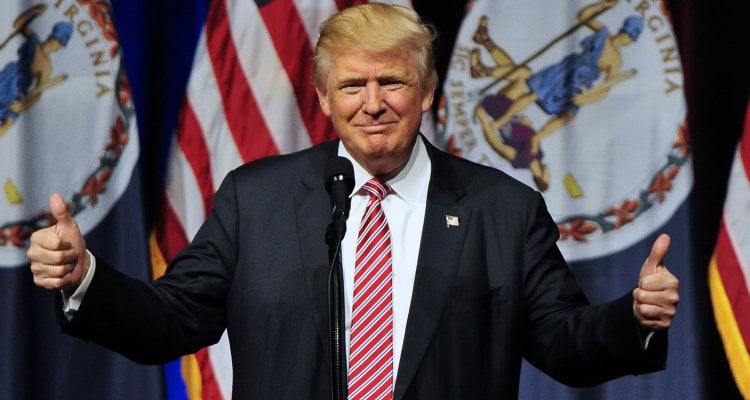 Here are five facts to know about Donald Trump, including his wiki, wife, net worth, children, quotes, age, and memes:

Thank you #Virginia! We will bring America together as ONE country again – united as Americans in common purpose and common dreams. #MAGA

Trump’s ancestry is a combination of German and Scottish. His father, Fred Trump came from Germany and originally, the family surname was Drumpf. His mother, Mary MacLeod was Scottish, and Donald was born and raised in Jamaica Estates, Queens in New York City. Donald’s father, Fred was one of the biggest real estate developers in New York, and he had five children. Born on 14th June 1946, Donald was the second youngest of his siblings Maryanne, Elizabeth, Robert and Fred Jr. The oldest Fred Jr. died of an alcohol overdose in 1981, while Maryanne is a Senior U.S. Circuit Judge.

Apparently, Trump was quite the troublemaker in his childhood, and left school to join the New York Military Academy (NYMA) at the age of 13. He enrolled at the Fordham University in the Bronx for two years, before transferring to the prestigious Wharton School of Finance and Commerce in Pennsylvania. He graduated in 1968 with a Bachelor of Science Degree in Economics. While at college, Trump deferred his drafting during the Vietnam War.

It was truly an honor to introduce my wife, Melania Trump last night. Her speech and demeanor were absolutely incredible. Very proud! #GOPConvention #RNCinCLE

Trump began his career working with his father’s company, Elizabeth Trump and Son. After working on rental housing projects in Brooklyn, Queens and Staten Island, he eventually took control of the company in 1971. Renaming the business The Trump Organization, Trump helped the company reach greater heights and began amassing his vast fortune. He built the Trump Plaza and The Trump Tower, which became iconic buildings in New York City.

Over the next years, Trump continued expanding his empire, acquiring the Taj Mahal Casino and converting it to Trump Hotels and Casino Resorts, after selling off his Trump Shuttle airline and mega-yacht, The Trump Princess. His companies were declared bankrupt four times, but Trump received his father’s inheritance valued around $300 million. He built the Trump World Tower, numerous golf courses, and purchased football franchises. He also owned the Miss Universe, Miss U.S.A, and Miss Teen U.S.A pageants before opening the Trump University. Trump even had his own reality TV show, The Apprentice.

THANK YOU #AMERICA! WE DID IT! What a way to secure the nomination- with my kids putting US ALL over the top with #NewYork! I l#love you @ivankatrump, @tiffanytrump, @donaldjtrumpjr, & @erictrump! #TrumpTrain #Trump2016

Trump has been married three times and has five children. His first marriage was to Czech model, Ivana Zelníčková, with whom he had three children; Donald Jr., Ivanka, and Eric. His second wife was actress Marla Maples, and he has a daughter named Tiffany with her. After two well-publicized divorces, Trump is currently married to Slovenian model, Melania Knauss, with whom he has a son named Barron. Trump has eight grandchildren; five from his eldest son Donald Jr., and three from his daughter Ivanka.

If you’re wondering about Donald Trump’s net worth, we’ll have you know that the 70-year-old is a billionaire! Yes, you read that right.

Touted as the richest presidential candidate, Trump’s net worth is estimated to be $4.5 billion.

He amassed his vast fortune over three decades. In his own words, “It’s very simple. If I call five guys about Trump Tower, (and tell them), I want $2 billion… I’d have checks on my desk in ten minutes.” Enough said.