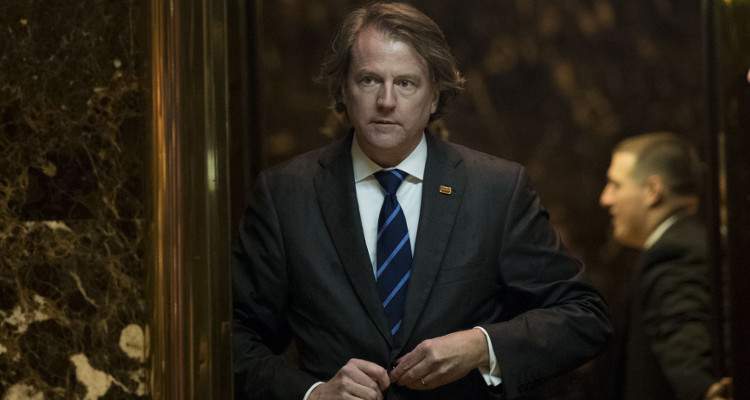 Who is Don McGahn? For a while, the White House special counsel slipped under the radar among the more headline-making Trump administration officials. But Don McGahn is a name we’ll be hearing more of, especially during the ongoing Trump-Russia investigation.

It’s common knowledge among political circles that Trump flirted with the idea of firing Robert Mueller. Only a recent report revealed that the President attempted to deliver on his threat. But what stopped him?

White House lawyer Don McGahn blocked Donald Trump from firing Robert Mueller. A while ago, McGahn’s name floated in the media regarding another high-profile firing.

Find out about this influential Republican, right here, in our Don McGahn wiki.

He Was Part of Bush’s Campaign

New Jersey native, Donald F. McGahn II grew up in Atlantic City and attended the U.S. Naval Academy in Maryland. He went on to acquire a B.A. in history and computer applications from the University of Notre Dame in 1991. He received his Juris Doctor from Widener University School of Law in 1994 and a Master of Laws from Georgetown University Law Center.

After graduating law school, McGahn began his career in Washington D.C., working in campaign finance law. He left his job at Patton Boggs law firm and stepped into politics.

McGahn was chief counsel for the National Republican Congressional Committee from 1998 to 2008. He briefly managed his own law firm before George W. Bush enlisted him in his 2000 campaign.

It was McGahn who filed Bush’s candidacy papers with the Federal Elections Commission. Years later, he was sworn in as a Republican member of the FEC, after Bush nominated him.

After leaving the FEC in 2013, he returned to Patton Boggs but later moved to Jones Day. He left Jones Day last year to join the Trump administration.

He’s Not a Run-of-the-Mill Politician

During his tenure in the FEC, McGahn made landmark decisions to loosen regulations on campaign spending.

“He rewrote virtually all of the FEC’s procedures for audits, enforcement matters and advisory opinions, which provide for an unprecedented amount of due process,” McGahn’s former law firm wrote.

McGahn knows how to drive a point home with theatrical effect, too.

According to one account, he ripped out pages of regulations out of a book during a public hearing to get his voice heard above his Democratic counterparts. But that was McGahn for you!

The White House lawyer is a prolific presence in Republican politics, but an outsider nonetheless. He stands out from his colleagues with his longish hair, his non-Ivy League degrees, and his past as a bassist for an ‘80s cover band.

His Wife Is a Top Official

Don McGahn’s wife, Shannon McGahn, was a top Treasury Department official. She was a counselor to Treasury Secretary Steven Mnuchin when her husband was appointed as White House lawyer.

As a counselor, she helped Mnuchin appoint staff and advised him on legislative and public affairs. But she left the Treasury Department at the start of 2018, becoming the first top-level appointee in the Trump administration to leave this department.

McGahn returned to her old job at the House Financial Services Committee and will serve as Republican Representative Jeb Hensarling’s staff director.

A Tale of Two Donalds

When Don McGahn joined Donald Trump’s presidential campaign as special counsel, it was said there couldn’t be a better match. Both Don McGahn and Donald Trump are essentially outsiders in D.C., but McGahn has the knowledge and smarts to guide the president.

In 2016, McGahn fought off all litigation and legal efforts that threatened to derail Trump’s campaign. He even prevented an attempt to get Trump kicked out of the Republican primary ballot in New Hampshire.

After Trump’s victory, McGahn was named general counsel of the presidential transition team. He was then appointed as White House special counsel in Trump’s White House.

As special counsel, he advised the President on several important appointments. However, he made headlines for putting out fires started by Trump.

In September 2017, it was reported that Trump drafted a letter to explain FBI director James Comey about his firing. But McGahn found the letter problematic and blocked it from being sent.

For a long time, Donald Trump has been issuing public warnings to Robert Mueller, the special counsel probing the Trump-Russia ties, about crossing “red lines.”

According to a recent report, he instructed McGahn to fire Mueller in June. But the 49-year-old refused to carry out the order and threatened to resign if Trump ordered a dismissal. He argued that firing Mueller would be catastrophic to Trump’s presidency.

Robert Mueller was building an obstruction of justice case back then. He even interviewed Don McGahn regarding the investigation.