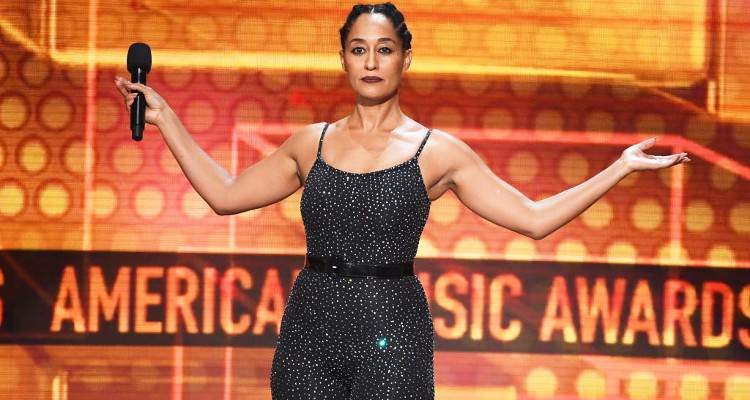 Superstar Diana Ross was honored with a Lifetime Achievement Award at the 2017 American Music Awards Sunday night. And it was only fitting that Diana Ross’ daughter, Tracee Ellis Ross, hosted the show! The glamorous Diana Ross may have stolen the show, but her daughter left her own mark with her characteristic humor and effervescence. Learn all about her in our Tracee Ross wiki.

It was a night to remember at the AMAs as America’s music powerhouses came together to present a glittering tribute to Diana Ross, former member of The Supremes, and one of the greatest artists of all time. On a night of moving tributes, including a surprise appearance by Taylor Swift, Tracee Ellis Ross was the perfect host.

So, who is Tracee Ross? There is so much more her than being Diana Ross’ daughter, so keep reading to know more!

Born on October 29, 1972, in Los Angeles, California, Tracee Ross’ age is 45. Her parents are Diana Ross and Robert Ellis Silberstein. She spent some of her early life in New York City and graduated with a theatre degree from Brown University in 1994.

Tracee Ross’ father is a music business executive. Her parents met in the 1970s when Silberstein was Diana Ross’ manager, and they were married for six years.

"Born Tracee Joy Silberstein, Ross chose to honor both her parents when she became a member of the Screen Actors Guild. “I wanted everyone to not just know I was Diana Ross’ daughter, but that I was Bob Ellis’ daughter,” she says."
“I’m so much like my dad,” Ross says, adding that her screwball personality and comedy instincts came from her father. “It just was really important to me that he have as much claim to me as my mom had.” My father's name is Robert Ellis Silberstein but he goes by Bob Ellis! #blackish #backstage #TBT

With parents as famous as hers, it’s no surprise that Ross chose a career in show business! She is a model, television host, Emmy-nominated actress, and comedian. She added one more feather to her cap after brilliantly hosting last night’s AMAs.

In case you’ve been searching for Tracee Ross’ husband or Tracee Ross’ kids, you’re out of luck. The 45-year-old actress has never been married and doesn’t have any children.

She has, however, been in relationships with Bu Thiam, DeRay Davis, and a few others in the past, but reportedly, is currently single.

In an interview with ET after last year’s Emmy nomination, she shared her experiences with trying on her dress for the award ceremony saying, “I am 43 years old. I have not been engaged or gotten married. I haven’t had a child, and there’s not a lot of things in our culture that allows single people to be celebrated. It was this moment that was really beautiful.”

Tracee Ross made her debut in 1996 with the independent film, Far Harbor. Since then, she went on to be featured in television shows like Girlfriends and Black-ish. She also had cameo roles on popular shows like Private Practice and CSI.

She won many awards for her performance on Black-ish, including the 2016 Golden Globe Award for Best Actress-Television Series Musical or Comedy. She also received a 2016 Emmy nomination for her portrayal of Dr. Rainbow Johnson. It was a major achievement for her as it was the first time in 30 years that an African-American actress was nominated for Outstanding Lead Actress in a Comedy Series.

If you're going to cry on a Tuesday, let it be from laughter! #blackish premieres TONIGHT 9|8c on ABC!

#4. She Struggled with Body Image Issues

Like many women, Tracee Ross struggled with a negative body image issues as a young girl, and fought hard to overcome it, “I have had an internal struggle as a young girl of not feeling comfortable in my skin, and I just happen to be one of those people who has fought hard to love who I am. My size fluctuates between a large 4 and a 10.”

FEELIN’ MYSELF ~ in some of my new faves. @rachelkarten don’t make fun of my shoes. i love them so much! #TheGirlWhoLovesToShop @matchesfashion

Fans may have noticed Tracee Ross’ eye problem, which is rumored to be a condition called ptosis, but the actress hasn’t confirmed it. The condition is characterized by a droopy eyelid in one eye which makes that eye look smaller than the other. Ptosis or not, Ross is a beautiful woman!

The actress takes to Instagram to post pictures of her life, and we can’t help but laugh at her hilarious pictures!

HAS ANYONE EVER HAD THEIR NOSE HAIRS WAXED? ~ let this be a lesson to you: just say no.

She is very close to her mom, and it’s evident from her Instagram page. We love this sweet video she posted just before the AMAs. The two are an amazing mother-daughter duo, and we loved how brightly they shone last night!