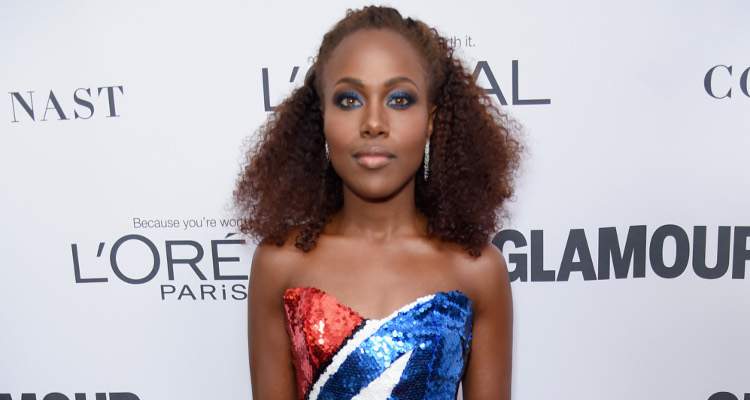 Actress DeWanda Wise is the leading lady in the remake of She’s Gotta Have It, a 1986 film about fictitious Brooklyn artist, Nola Darling. The 10-episode series was released on Netflix on Thanksgiving Day and fans can watch how the bold and beautiful Nola Darling transformed into her 2017 avatar. We think DeWanda Wise is the perfect choice to play the role. Read on to find out more about this talented actress!

DeWanda Wise’s She Gotta Have It journey has begun! The hazel-eyed actress stars as Nola Darling in a contemporary series based on the ‘80s movie, and fans can now catch up on all the drama on Netflix. The 1980s film revolved around aspiring artist Nola Darling, and the several relationships she juggled while living in a Brooklyn neighborhood. Executive producer and director Spike Lee reinvented the characters for a more modern-day setting, but still retained the movie’s essence.

DeWanda Wise is giving us nostalgic feels by stepping into the shoes of the popular ‘80s character. We have everything you need to know about her role as Nola Darling and more in our DeWanda Wise wiki.

DeWanda Wise was raised in Baltimore, Maryland. From a young age, she was interested in music and the performing arts, according to her bio on Facebook. Her first solo singing performance was when she was four years old in a church choir.

As a young girl, she loved literature and writing, and actively took part in singing and poetry competitions in Maryland and across America.

Wise developed a love for acting during her high school years, and went on to attend New York University’s Tisch School of the Arts. While there, she participated in several plays and student projects. She graduated with a dual degree drama and urban, social, and cultural analysis, and was the recipient of a plethora of awards.

Her acting career began while at NYU when she was cast in a supporting role in the 2007 film adaptation of the play, Spinning into Butter. Wise continued acting on stage, starring in a string of theater roles in her career.

DeWanda Wise’s husband, Alano Miller is a fellow actor, and the two have been married since 2009. They live in California.

Miller is also an amazingly talented actor and his portfolio details roles in prominent projects. Wise and Miller starred together in the 2016 television series, Underground. Movie fans may also remember Miller from his performance in the critically acclaimed 2016 film, Loving.

DeWanda Wise’s Instagram has many pictures of the couple, and we love how they support each other’s acting careers.

Accurate. #ShesGottaHaveIt day 12 PREMIERE NIGHT EDITION w/these 3 exceptional gems. So thankful for actors you don’t have to act with. ??‍???‍???‍???‍?

…They’re not coming back guys. ?#HappyHalloween (I guess.) #TRICKorTreat

Corny >>> Cool #Forever Me & Miller ? @kouryangelo for #Netflix Def Jam special where I can be seen falling out of my chair & cry-laughing at Dave Chapelle.

DeWanda Wise has a supporting role in Fox’s crime drama, Shots Fired and had cameos on TV shows like The Mentalist, The Good Wife, Law and Order, and more.

Wise’s role as Nola Darling may not be the first time she’s appeared in a series, but it may just be one of her biggest appearances yet! The iconic character is the poster child for girl power. Strong and independent, the Brooklyn girl did not care about who she dated or what people thought of her. She did not fit into the cookie-cutter molds of society in the film, which was released in 1986.

But, according to Wise, 31 years later nothing, has changed, “Anyone who’s been like, ‘Why now? What makes this relevant? It was done 30 years ago, aren’t we further?’ Unfortunately, we’re not.”

She also said that it has become more difficult for people to speak out now, which makes shows like She’s Gotta Have It relevant even today.

“There’s actually more opportunities for people to police and have an opinion and attack and feel like for whatever reason they have domain over our very personal lives and bodies and choices, and that’s crazy. What’s invigorating about this moment is that we are all speaking up,” she added.

Head over to Instagram to check out DeWanda Wise’s pics as Nola Darling, and you’ll see how she brings the classic character back to life!

Millenial Nola. Profile from @latimes in my bio. Day ?? Shot by @jenniferaltman Makeup by @billieegene Hair by @lawandapierrehair