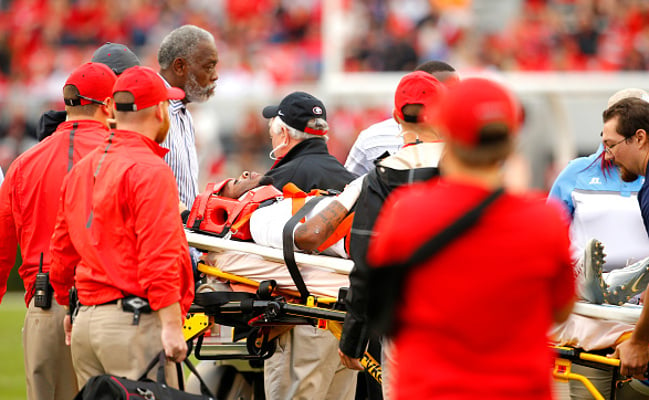 Devon Gales is an inspiration to us all. After Gales’ injury on the field, the football player is walking again after two years in recovery, being paralyzed from the waist down. He has had to put up with something most players fear, but he rose above the odds, determined to walk again. Gales is making sure he is getting the best therapy and is highly motivated by his family and friends. Read on to know all about the awe-inspiring football player in our Devon Gales wiki.

Devon Gales has been through what most of us can’t bear to think of, but he is proving that with a little motivation and a whole lot of faith, he can achieve anything. The football player posted a video of his paralyzed legs in movement, as he takes 12 steps with the help of his physiotherapist. This video sparked a lot of attention, with support flooding in for Gales and his unbelievable progress. Fans are hopeful the wide receiver will fully recover soon, and with his determination and hard work, it looks like he’s definitely on his way! If you are a fan of Devon Gales, then you will want to know all the details we have about him!

What Happened to Devon Gales?

Devon Gales was a wide receiver for Southern University’s Southern Jaguars. He was a sophomore walk-on, and a player with a lot of potential. It was on a fateful day in September 26, 2015 at Stanford Stadium when his team played against Georgia, that Devon Gales’ life changed. Nobody expected to witness a young player full of promise to be scarred for life when the game began, and Marshall Morgan, the star player for Georgia pushed ahead. He saw Gales making his way towards him with his arms stretched out. Morgan braced himself, and in a flash, Gales was seen colliding with the placekicker from Georgia. The next thing anyone saw was Devon Gales on the ground, unable to move.


The Bengals need to sign K Marshall Morgan! He could easily beat out Mike Nugent and we all know we surely need a new Kicker!!!!!! He’s a Rookie/Freshman, so he’s young and he’s got a strong leg so yes he would definitely come in handy! #MarshallMorgan #K13 #UGA #BeatUNC #CincinnatiBengals #Whodey #BeatJags

There was a lull before the commotion when Gales wasn’t getting up, as he did not seem to be in a condition to even move. Among the rush of people towering over Gales was Georgia’s trainer, Ron Courson, asking Gales if he could get up, to which the player replied, “I want to, sir, but I can’t.” This was a defining moment in Gales’ life, and it was the moment his whole world changed.

Devon Gales, the Southern University football player paralyzed during a game against the University of Georgia in 2015, walks again. . . Story link in bio. . . #talk4today#balleralert#tmz#pagesix#devongales#southernuniversity#georgiabulldogs#worldstar#football

Gales was then rushed to the hospital, who notified his family who weren’t in Georgia at the time. They waited four hours for Gales to get out of surgery, only to find out that he shattered his C6 vertebra, with the C4 and C5 pinching at his spinal cord. After all the work that was done on his spine, the result was that Gales was now bound to a wheelchair.

In Atlanta, Gales began therapy and rehab at the Shepard Center. He has since shown significant control over his arms and fingers, but not his legs. However, in 2016, Gales posted a video of himself and some volunteers helping him walk, with the tweet, “I’m on the way.”

Im on the way!! pic.twitter.com/4Kz77luWdT

The University of Georgia Athletic Association helped raise funds to build an accessible home for Devon Gales and his family. The goal of the fundraiser was to help the player and his family cope with the tragedy by raising a total of $500,000 —the amount needed to build a home with all the equipment they need. Fans and well wishers could also donate to the cause by writing a check or phoning the office with their donation. UGA alum and current Baltimore Ravens tight end Ben Watson donated $10,000 to help Devon Gales and his family.