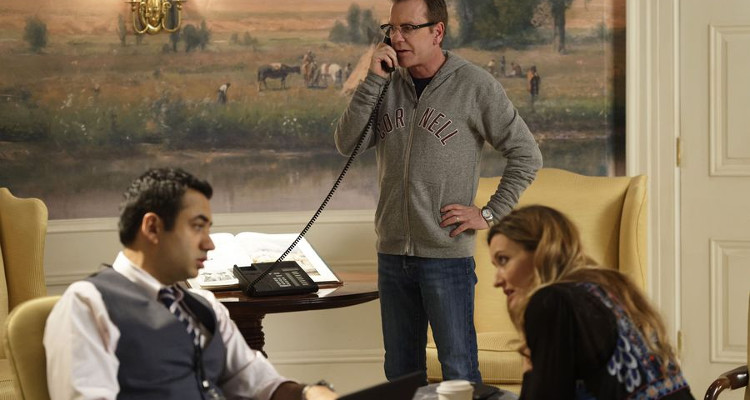 Imagine that tonight you put on your TV to watch your favorite sitcom. Just when you have settled down and are enjoying your show, a news break cuts in and gives you the devastating news. The President of the USA and all the members of his cabinet have been assassinated by unknown perpetrators, at the start of the State of the Union address. What would you do? Who would you turn to? Will you panic at the state of the headless nation? Who would you accept as your President now? These are some of the terrifying questions that are raised in the Designated Survivor season 1 premiere on Wednesday, September 21, 2016 on ABC. This edge-of-the-seat scenario is vividly brought to life by the Designated Survivor season 1 cast in this new political drama series. The Designated Survivor cast is led splendidly by lead actor, Kiefer Sutherland.

Kiefer Sutherland, Designated Survivor’s lead actor, has already made a lasting impression on viewers as Jack Bauer in the Fox series, 24. However, he has had a long career in films, as well. The son of well known actor, Donald Sutherland, Kiefer got his first leading role in the Canadian film, The Bay Boy. Since then, he has acted in few but memorable films like Stand By Me, The Lost Boys, Young Guns, Flatliners and A Few Good Men. Then, he started taking on more mature roles in films like The Three Musketeers, A Time to Kill, Dark City, Phonebooth and Melancholia. However, it is for his role in 24 that Sutherland has become most famous. He has won an Emmy, one Golden Globe and two Screen Actors Guild awards for his acting in the series 24. In Designated Survivor, Sutherland plays the role of Tom Kirkman, the former Secretary of Housing and Urban Development, who is forced to become the acting President of the U.S., when the current President and all the cabinet members are killed.

Natascha McElhone plays Alex (Kirkman’s wife), who is also an attorney. McElhone is a famous British actress who has appeared in acclaimed films like Ronin, The Truman Show, Devil’s Own and Solaris. She has an aristocratic bearing and she definitely looks the part in Designated Survivor. She started her career in theater, where she played roles in many stage productions. Actor Kal Penn plays the role of Seth Wright, Kirkman’s speechwriter, who doubt’s his superior’s ability to lead the country. Penn achieved fame in the Harold & Kumar films, playing the role of Kumar Patel in the hit series. Maggie Q plays the role of an FBI agent, who is investigating this horrific attack and believes that the killers are not done yet. She has a penchant for acting in action films like Mission Impossible: III, Live Free or Die Hard, Divergent, Insurgent and Allegiant.

Actress Virginia Madsen plays the role of Kimble Hookstraten, the ‘designated survivor’ of the rival political party, who supports Kirkman but has her own hidden agenda. Adan Canto plays Aaron Shore, the White House Deputy Chief of Staff, who now advises Kirkman after the fatal attack. Italia Ricci plays the former Chief of Staff of Kirkman, who is also a close family friend. There are other notable actors like Malik Yoba, McKenna Grace and Mykelti Williamson who play pivotal roles in this thrilling series.

The storyline is plausible and the cast does a great job of portraying the terror and tension of people under siege. The actors look convincing and the confusion and fear of being in such a helpless situation is well emoted. What once looked the stuff of pulp fiction is now terrifyingly real. On a fateful day in America, the unthinkable could happen. The U.S. could be a country under attack without a leader and Designated Survivor does a fantastic job of bringing that scenario home. Don’t miss the Designated Survivor season premiere tonight at 10 p.m. on ABC.