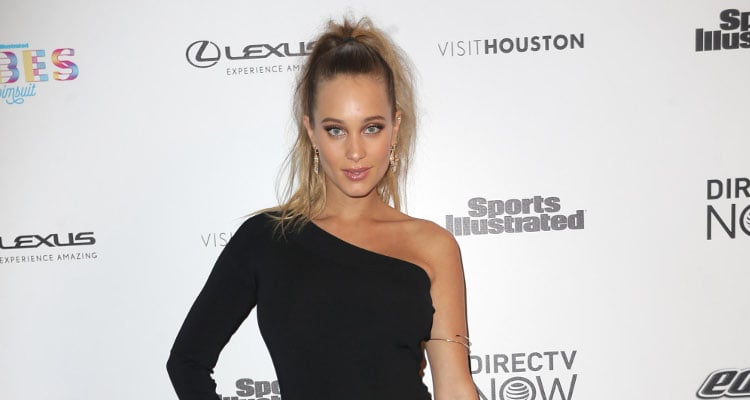 Hannah Jeter showed off her baby bump on Mother’s Day at Yankee Stadium while supporting her husband, Derek Jeter at his jersey number retirement ceremony. Here is everything you need to know about her in our Hannah Jeter wiki.

On Sunday, May 14, Derek Jeter retired his jersey number during a ceremony at Yankee Stadium. He and model wife, Hannah Jeter are expecting their first baby together. The couple officially announced the news on Derek’s website, The Player’s Tribune in a post reading, “Big moments also have a funny way of making you look ahead. Now, pregnant with our first child, Derek and I are looking to the future.” Keep reading for more about Derek Jeter’s wife, Hannah Jeter.

Hannah Davis Jeter was born on May 5, 1990 in Saint Thomas, in the U.S. Virgin Islands. At her age of 27, she is already an accomplished model. Born to Deborah L. and Conn Jay Davis Sr., she is also related to sports journalist and broadcaster, Glenn Davis. Hannah has a sister, Rachel Davis, and a brother, Conn Davis Jr. She grew up in Saint Thomas and has some of her fondest memories growing up there, from “the friendly people, great weather and waking up to the sound of the waves on the beach.”

Besides modeling, Hannah was also into sports. She started playing tennis when she was eight, becoming a champion on the Caribbean National tennis team and playing on the Caribbean Tennis Circuit. She was also a part of the Virgin Islands National volleyball team.

Hannah started her career in the modeling industry at the very young age of 14. She has been a face of several reputed brands like Ralph Lauren as the face of their fragrance Ralph Rocks, and she walked in the Blue Label 2006 Spring/Summer runway show.

Her modeling career also gave her the opportunity to work with Victoria’s Secret, Tommy Hilfiger, Levi’s, and American Eagle Outfitters. From 2013 to 2016, Hannah made appearances in four Sports Illustrated swimsuit issues, making it to the cover in 2015.

Her modeling career also helped her win a small role in the comedy, Vacation. Since 2015, she has been the host of Project Runway: Junior. Hannah Jeter’s net worth is estimated to be .

Hannah and Derek Jeter met back in 2012 through a mutual friend, and dated for a while before getting engaged. Derek popped the question in 2015. He subtly shared the news on his website in a post about his new puppy saying, “I had no idea what I was in for as a new dog owner. He was a Christmas gift last year from my fiancée, whose family had Mastiffs growing up. I’ve never owned a pet in my life.” On July 9, 2016, the couple got married in Napa Valley. In February 2017, the couple announced that they are expecting their first child.