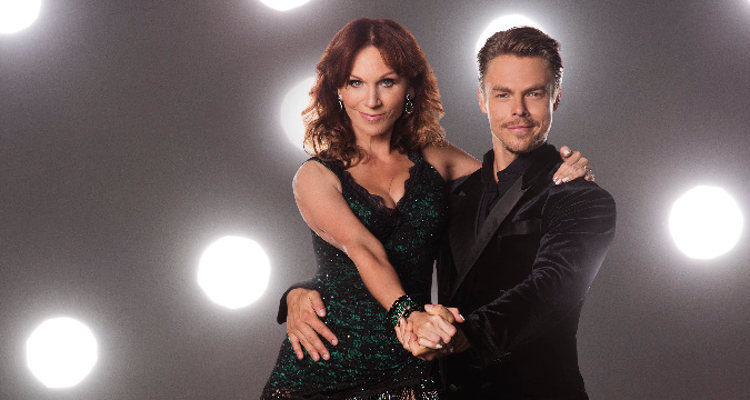 Actress Marilu Henner is one of the contestants on Dancing With the Stars and she is paired up with the sensational professional dancer, Derek Hough. Marilu Henner was definitely more than happy when she was first introduced to her dancing partner, and of course there was lot of screaming in excitement. The new partners met for the first time in Marilu Henner’s house. She was not sure that Derek Hough was performing and could not contain her excitement when she finally understood he would be her dancing partner!

Fans who are charmed with Derek’s looks and dancing skills are probably wondering if Derek is dating someone. Well fans, you’re in luck because according to sources, he is not dating anybody! His last reported girlfriend was fellow dancer, Hayley Erbert. Derek Hough and former dance partner Brooke Burke earned the Mirrorball trophy and were the crowned champions of season 7. Hough has won the competition multiple times with several different Hollywood stars including Bindi Irwin, Amber Riley, and Jennifer Grey.

Derek Hough “Singin’ In the Rain”

SCOUT LAW A Scout is TRUSTWORTHY. A Scout tells the truth. He keeps his promises. Honesty is part of his code of conduct. People can depend on him. LOYAL. A Scout is true to his family, Scout leaders, friends, school, and nation. HELPFUL. A Scout is concerned about other people. He does things willingly for others without pay or reward. FRIENDLY. A Scout is a friend to all. He is a brother to other Scouts. He seeks to understand others. He respects those with ideas and customs other than his own. COURTEOUS. A Scout is polite to everyone regardless of age or position. He knows good manners make it easier for people to get along together. KIND. A Scout understands there is strength in being gentle. He treats others as he wants to be treated. He does not hurt or kill harmless things without reason. OBEDIENT. A Scout follows the rules of his family, school, and troop. He obeys the laws of his community and country. If he thinks these rules and laws are unfair, he tries to have them changed in an orderly manner rather than disobey them. CHEERFUL. A Scout looks for the bright side of things. He cheerfully does tasks that come his way. He tries to make others happy. THRIFTY. A Scout works to pay his way and to help others. He saves for unforeseen needs. He protects and conserves natural resources. He carefully uses time and property. BRAVE. A Scout can face danger even if he is afraid. He has the courage to stand for what he thinks is right even if others laugh at or threaten him. CLEAN. A Scout keeps his body and mind fit and clean. He goes around with those who believe in living by these same ideals. He helps keep his home and community clean. REVERENT. A Scout is reverent toward God. He is faithful in his religious duties. He respects the beliefs of others. #somethingToStriveFor

Initially, Derek was not going to participate in this season’s DWTS due to the fact that he is participating in the Broadway Production of “Singin’ In the Rain”. However, the production has been scheduled for a later date, so Derek has all the time in the world to participate on this season of Dancing With the Stars. Phew!

Marilu Henner played the role of Elaine Nardo in the early 1980s sitcom, Taxi. Marilu has been diagnosed with Hyperthymesia, a condition wherein she has an abnormally hyperactive memory, mainly a highly superior biographical memory. Those with Hyperthymesia are able to recall every single detail of their daily lives, almost in perfect detail. Apparently, Marilu developed this condition around the age of 11, and can literally recall every detail of her daily life since that time. Even though Marilu is 64-year-old, she is still such an amazing dancer. She used to host her own talk show called Marilu, however, the show lasted for only 165 episodes before it was canceled. Additionally, Marilu is the author of nine books namely, Total Memory Makeover: Uncover Your Past, Take Charge of Your Future, Wear Your Life Well: Use What You Have To Get What You Want, Healthy Holidays, Healthy Kids: Help Them Eat Smart and Stay Active-For Life!, Healthy Life Kitchen, I Refuse To Raise A Brat, The 30-Day Total Health Makeover, Marilu Henner’s Total Health Makeover, and By All Means Keep Moving.

MARILU HENNER ladies and gentlemen. Team #Hennergy baby!!!!! ???????????????? This woman’s got more life and energy in her than almost anyone I’ve ever met. She exudes passion in everything she does and has already shown me that she is ready to dance. Come along and join us on this new exciting journey! #Dwts #TeamHennergy

When Derek learned that Marilu would be her dancing partner on the show, he posted a photo with her on Derek Hough’s Instagram account and wrote the following caption: “This woman’s got more life and energy in her than almost anyone I’ve ever met. She exudes passion in everything she does and has already shown me that she is ready to dance. Come along and join us on this new exciting journey! #Dwts #TeamHennergy.”