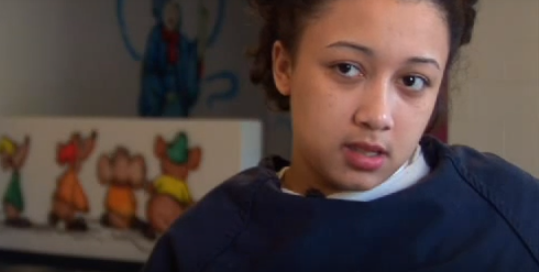 The Cyntoia Brown case has caused a lot of uproar online, as people are questioning the justice system’s decision to put her behind bars. If you want to know more about the 2017 Cyntoia Brown and Johnny Allen case, read our Cyntoia Brown wiki for the facts you need to know.

Here’s what you need to know about Cyntoia Brown’s story. In 2004, when Brown was 16, she shot and killed Johnny Mitchell Allen. According to reports, Brown climbed into a pickup truck on Murfreesboro Pike with a stranger and went to his home. She ate with with him, watched TV with him, and eventually got into his bed. As she stated in her court hearing, he had been showing off his guns and saying that he was in the army and is a “straight shooter.” Despite her actions, she claimed she felt nervous around him, so when they were in bed and he turned over suddenly, she thought he was going for a gun. In an act of what she claimed to be for fear of her life, Brown shot and killed him at the back of his head using a .40-caliber handgun.

Cyntoia Brown, now 28, is serving a life sentence at the Tennessee Prison for Women for murdering the 43-year-old Nashville real estate agent. Cyntoia Brown’s release date is not even considerable until sometime after her 69th birthday when she will be eligible for parole. Brown never denied her crime, but said she was forced into prostitution by a violent man she was in a relationship with. “I shot him,” she said in a conversation that was recorded shortly after the crime. “I executed him.” The shock of this particular situation comes as a wave of scientific studies have shown that adolescents are behind adults in brain develop, specifically areas that regulate aggression, long-term planning, and abstract thinking. Many are questioning the sentence, referring to research that shows that childhood trauma can negatively affect brain development.

Currently, Tennessee is getting negative attention as 183 people are presently serving life sentences for offences they committed in their teenage years. According to Kathy Sinback, court administrator for the Juvenile Court of Metropolitan Nashville and Davidson County, “A life sentence in Tennessee is basically life without parole. You are basically taking a kid at age 14 or 15 or 16 and making a decision about the rest of their life based on who they are at that age, and they’re not developed human beings at that time. You have kids at their peak of poor judgment, impulsivity and lack of development and we’re taking that one thing that they do and locking them into sentences that are going to last for the rest of their lives.”

Petition for Her Release

Campaigners are calling for Brown’s release, arguing that she was in a terrible situation as a result of being forced into sex trafficking by an abusive drug dealer named Kutthroat when she was very young. The Cyntoia Brown case inspired a petition saying: “This woman (who is now 25) was only a child at 16 years of age at the time of the incident when her 42-year-old victim (a grown man who had lived his life) solicited sex with [her]. He had the upper-hand being the adult and should have made the decision to help her seek a better way instead of co-signing on her destruction by soliciting sex.”

Celebrities like rapper T.I. and singer Rihanna are also speaking out against what many consider to be an injustice.

did we somehow change the definition of #JUSTICE along the way?? cause….. Something is horribly wrong when the system enables these rapists and the victim is thrown away for life! To each of you responsible for this child's sentence I hope to God you don't have children, because this could be your daughter being punished for punishing already! #FREECYNTOIABROWN #HowManyMore