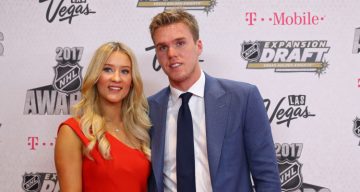 Connor McDavid, the standout captain of NHL team the Edmonton Oilers, recently took fans on a virtual tour of his luxurious home through Architectural Digest. Connor McDavid’s girlfriend, Lauren Kyle, had a part in designing the home that was a trending topic for social media users. It got McDavid’s fans curious about their relationship. Many want to know who Lauren Kyle is and what her background is. Though she is a frequent presence at McDavid’s games, she has remained low-key up to her AD appearance. So, for all the new followers interested in this NHL WAG, we have all the details in this Lauren Kyle wiki.

Lauren Kyle was born on June 26, 1996, and is from Toronto, Canada. She is the only girl of three children born to Sharon and Paul Kyle. Lauren grew up alongside two brothers, David and Ward Kyle.

Like her boyfriend, Lauren Kyle also has a passion for sports. She played volleyball in college.

She initially attended the University of British Columbia, Okanagan. However, she later transferred to Ryerson University in Toronto. Kyle has also traveled to different places like Arizona, California, New York, Las Vegas, as well as Indonesia.

Kyle completed her bachelor’s degree in interior architecture at Ryerson in 2019. According to her LinkedIn, she worked at an interior design firm and is currently a decorator based in Ontario.

Undoubtedly, Connor McDavid’s girlfriend is very beautiful. It looks like the two have been together at least since 2016, when the NHL pro appeared on Lauren Kyle’s Instagram account in July of that year. McDavid, on the other hand, posted the first picture of him with his girlfriend on his social media accounts in February 2017. Kyle has since been seen attending McDavid’s games.

McDavid and Kyle live in a modern mansion in Alberta. The couple’s home became a trending topic on social media when it was featured in Architectural Digest.

Kyle’s design expertise had a part in building their dream home. However, the lack of warm colors in the monochromatic palace was the subject of jokes online.