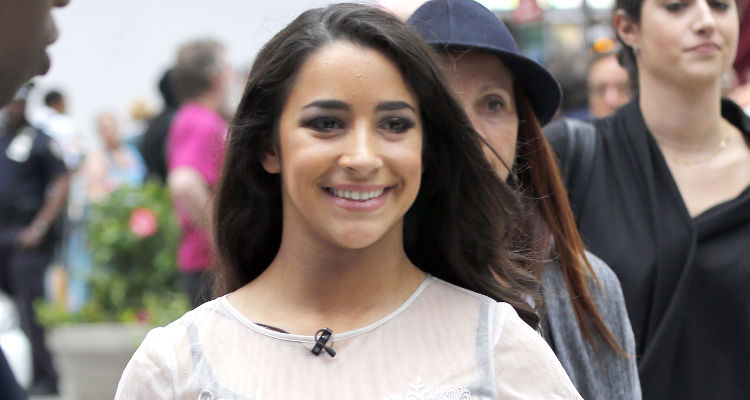 Appreciate my guy @pj_mangieri for having me out to the cabin! #FishOn #MidwestLiving #Part2

#4 He Plays for the Oakland Raiders

24-year-old Underwood is a tight end for NFL team, the Oakland Raiders. In 2014, the 6’3″ tall footballer was signed on by the San Diego Chargers as an undrafted free agent. He has played for the Philadelphia Eagles, as well. The star player has an estimated net worth of $1.1 million, and earns around $450,000 a year. He also rakes in $55,000 in sponsorships, bonuses and endorsement deals. Not bad at all!

#3 He Asked Aly Out on a Double-Date

Underwood asked Raisman out in an unorthodox fashion, proposing to date her via video. He said, “Just wanted to congratulate you on all your success in the competitions and representing the USA over there; I know I’ve been following along; my roommate, my teammates, everybody here is super proud of you; if you’re ever in San Jose and ever want to go on a double date with me and Andrew and Shawn, let me know.” To clarify, Shawn Johnson is a retired Olympic gymnast, and her husband Andrew East is Underwood’s teammate.

Raisman’s reply after watching the video was, “He’s very cute—yeah, I would go on a date with him.” It looks like a romance might be blooming soon, since it has been reported that Raisman will indeed be in San Jose for a gymnastics tour in September! Let’s wait and watch to see what happens between the two!

@Colt3FIVE thanks for the sweet video…. looking forward to meeting you 🙂

Anytime! Looking forward to meeting you too. Safe travels back, see you soon! https://t.co/vWRhhqR5up

Update: My guy Hercules was adopted from the Champaign Humane Society!

#2 He is a Restaurateur

Besides his flourishing football career, Underwood is an entrepreneur as well, and recently opened his very own restaurant called 4th & Goal Grill, in Washington, Ilinois, his hometown. The multi-talented star player even helped his father with the interior of the eatery. In an interview, he stated that he hoped to create an “industrial, modern, rustic, sports bar.” Well, congratulations on your new venture Colton!

#1 He Advocates Against Cystic Fibrosis

Last year, Colton founded a non-profit charity called the Colton Underwood Legacy Foundation, to assist people diagnosed with Cystic Fibrosis, a life-threatening disease that causes lung and digestion issues. The cause is a personal one for Colton, and very close to his heart because his adorable 3-year-old cousin, Harper Hawksworth, has suffered from it since birth. In an interview Underwood confessed, “I want to keep that hometown mentality, make a difference in lives of kids where I used to live.” As if that wasn’t enough, he frequently visits children’s hospitals and hosts galas to raise research funds. Awww, could he be more perfect?