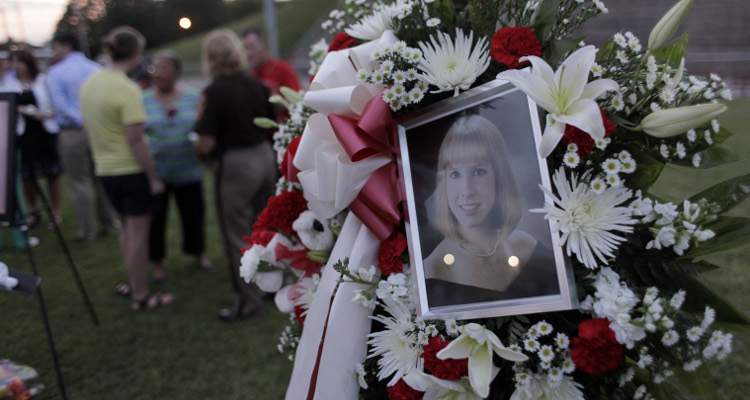 Chris Hurst, a former news anchor, won the race for Virginia’s House of Delegates on a gun control ticket, a cause that is close to his heart. Hurst’s girlfriend, Alison Parker was shot and killed during an interview on live television in 2015, and since then, he’s made it his mission to envoke change.

Christ Hurst hung up his mic to run for a seat in Virginia’s House of Delegates. He won the political office on Tuesday (November 7) campaigning for gun control. The former TV anchor fought for gun control after losing a loved one to a senseless act of violence over two years ago. Chris Hurst’s girlfriend, Alison Parker was shot dead on live television during a routine morning broadcast in 2015. Her cameraman, Adam Ward was also shot and killed at the time. Parker and Ward’s deaths shocked the nation in 2015 and with Chris Hurst making headlines lately, many are reminded of his late girlfriend and the tragedy of her death. We’ve got all the details you need, right here in our Alison Parker wiki right.

#1. She always Wanted to Be a Journalist

Alison Parker spent most of her early life in Virginia’s Martinsville area. She graduated from Martinsville High School and went on to attend James Madison University in Harrisonburg, Virginia. She also joined Patrick Henry Community College’s Dual Enrollment program. JMU established a scholarship in Parker’s name after her death.

Growing up, she knew where she wanted to work. “I grew up watching WDBJ7,” she said about the CBS affiliate station. While at JMU, she interned at WDBJ and said the station helped her apply all the skills she learned at school. “That internship made me fall in love with the business, and I knew broadcast journalism was exactly what I wanted to pursue.”

Amid her hectic schedule, she was the editor of the university’s nationally recognized newspaper, The Breeze. During her last semester, she interned at an ABC/Fox affiliate where they taught her how to produce newscasts.

She had a job waiting for her right after graduation in Jacksonville, North Carolina. Soon after, she was back in Virginia at the station where she started. Parker took over the WDBJ7 Mornin’ slot in 2014.

Congrats to all of the graduates at @virginia_tech and @VirginiaWestern! Throwback to my graduation! ? pic.twitter.com/drD0q0mSo7

#2. She Loved the Outdoors

In her spare time, Parker enjoyed outdoor activities. She loved whitewater kayaking and playing with her parents’ dog. She was also fond of community theater. Her father had a theater background and she always sought his opinions on her TV appearances.

Parker enjoyed reporting on the local happenings then throw herself into dangerous reporting situations. Her father was in disbelief that she died in a seemingly safe place. “Some journalists want to be right out there covering ISIL. She did not want that,” said her father, Andy Parker. “She was not keen on jumping into the middle of a firefight someplace.”

I looked a little goofy this morning on @WDBJ7 since it was so chilly! Good thing I had my JMU sweatpants with me! pic.twitter.com/I0tnoVDJjM

#3. She Was Shot by An Ex-Colleague

Parker was interviewing Vicki Gardner, an executive director of the local chamber of commerce on August 26, 2015. She was interviewing Gardner about the upcoming Smith Mountain Lake anniversary when gunshots were heard during the live segment, and Parker and her cameraman were shot.

The video was aired on Mornin’ where at least eight gunshots were heard, followed by screams. Ward’s camera fell to the ground and captured a brief image of the gunman before it cut to the studio with a visibly confused anchor, Kimberley McBroom.

The WDBJ newsroom staff identified the gunman to be Vester Lee Flanagan II, a recently fired reporter. While they informed authorities, the embittered Flanagan was seemingly gloating. He sent a chilling fax to ABC confessing to his crime. It spurred a manhunt, which ended with Flanagan killing himself.

Further investigations concluded that Flanagan had a disturbed mental state. His behavior at work had gotten him into trouble several times, eventually ending with him losing his job from WDBJ before the shooting. On his social media, he alleged he was targeted at his workplaces for being a homosexual black man. He even made accusations against Parker and Ward.

He reportedly recorded the shooting from a phone camera and posted it on his Twitter and Facebook. The accounts with the video were taken down when he was named as a suspect in the shooting. The video revealed that his target had been Parker.

He called the fax sent to ABC a ‘suicide note’ and alleged he faced racial discrimination and sexual harassment at work. He claimed he was provoked by the Charleston Church Shootings.

#4. Parker and Hurst Planned to Marry

Hurst was the anchor for the evening newslot at WDBJ when he met Parker at a Christmas party, a year before the shooting. They had their first date that New Year’s Day. After dating for nine months, the couple moved in together in August 2015, the same month she died. Calling her “radiant” he tweeted, “We wanted to get married.”

After her death, Hurst and Parker’s family began campaigning for reasonable gun control laws in the state. In February, Hurst wrote in an op-ed that he decided to leave his job at the station and run for the House of Delegates.

“In 2015, my girlfriend Alison Parker was executed on live TV,” wrote the former news anchor adding, “Now, I’m leaving my career at the station where she worked to fight for the causes she and I value the most.”

While gun control was his main issue, he was fighting for other causes, too. “Anybody who sees me as a single-issue candidate because my girlfriend was killed with a gun needs to look at my body of work over the past seven years here and see how many different topics I’ve covered and have been curious and interested in.”

Hurst won the race for the 12th district of Virginia’s House of Delegates. He received 53.51% of the vote.

We didn't share this publicly, but @AParkerWDBJ7 and I were very much in love. We just moved in together. I am numb. pic.twitter.com/tUrHVwAXcN