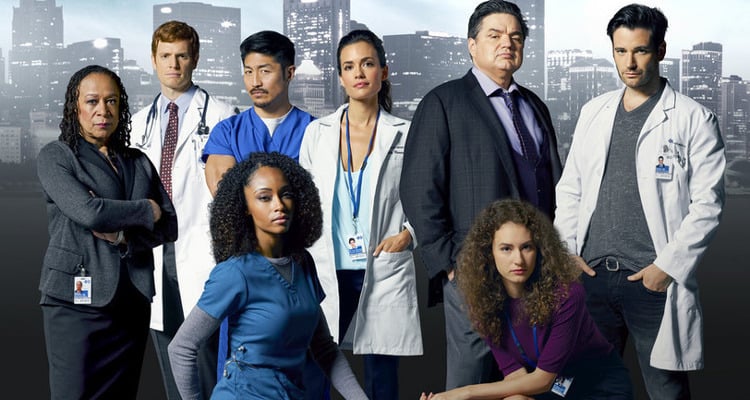 NBC’s hit new medical drama, Chicago Med is back tonight with another season! This season comes with some familiar faces and the arrival of a few new ones, notably one that will bring back memories. This season will pick up from where the previous season left off. Many are curious about what’s in store for the main characters of Chicago Med and are searching for information about the cast of season 2. Who’s returning and who’s new to the Gaffney Chicago Medical Center? We have all the details about the Chicago Med season 2 cast right here!

Dr. Will Halstead, played by Nick Gehlfuss was offered a permanent position at Chicago Med, which means he will definitely be returning. He’s stuck in a love triangle with Dr. Natalie Manning (Torrey DeVitto) and another man from her past. Dr. Connor Rhodes a.k.a. Colin Donnell said goodbye to his mentor last season and is beginning his fellowship under a new doctor, who’s definitely not as likable as Dr. Downey. Brian Tee’s character, Dr. Ethan Choi has a more elevated status this season, as well. He’s been appointed as the new chief resident and has some tough responsibilities. During the season 1 finale, Nurse April Sexton (YaYa DaCosta) was diagnosed with tuberculosis and it’s active and contagious. She now faces the dilemma of telling her boyfriend (who just proposed to her) about her medical condition. S. Epatha Merkerson reprises her role as Sharon Goodwin, who has to pick up the pieces of her life, after her husband left her last season. The character whose future seemed the most uncertain was Dr. Sarah Reese. Played by Rachel DiPillo, Reese had opted not to take up Pathology and was left unemployed. However, this season Dr. Charles, played by Oliver Platt, presents her with an unbelievable offer, which means Reese will return to Chicago Med.

This is the team you want on your side. #ChicagoMed pic.twitter.com/4kcnMdIHTC

This season, we’ll get to see one familiar face who’s no stranger to the spin-off drama series created by producer Dick Wolf. Jeff Hephner reprises his role as Jeff Clarke, a character that was first seen in Chicago Fire. The former firefighter is now a medical student at Chicago Med and represents one corner of the love triangle between Dr. Natalie Manning and Dr. Will Halstead. He shares some unclear history with the widowed Dr. Manning and Halstead is definitely not fond of him.

Season 2 is going to start right where we left off! Are you ready? #ChicagoMed pic.twitter.com/Ov57grmAzm

Chicago Med season 2 will see Dr. Rhodes struggle with some new people. Now that he’s lost his previous mentor to cancer and has a new fellowship to begin, it only makes sense he has a new teacher. Enter Dr. Latham, played by Ato Essandoh, Rhode’s new boss. The problem is, he is not an easy person to get along with!

Rhodes is also going to deal with a heart condition. No, he’s not diagnosed with some disease, but he has a new love interest by the name of Dr. Robin Charles. Mekiah Cox will play Dr Charles’s eldest daughter, Robin. She’s an epidemiologist and is quite rebellious by nature. Rhodes is going to have a tough time with Dr. Charles, because he doesn’t entirely approve of him for his daughter.

This season of Chicago Med is packed with drama. Don’t miss it, tonight at 9:00 p.m. EST on NBC.