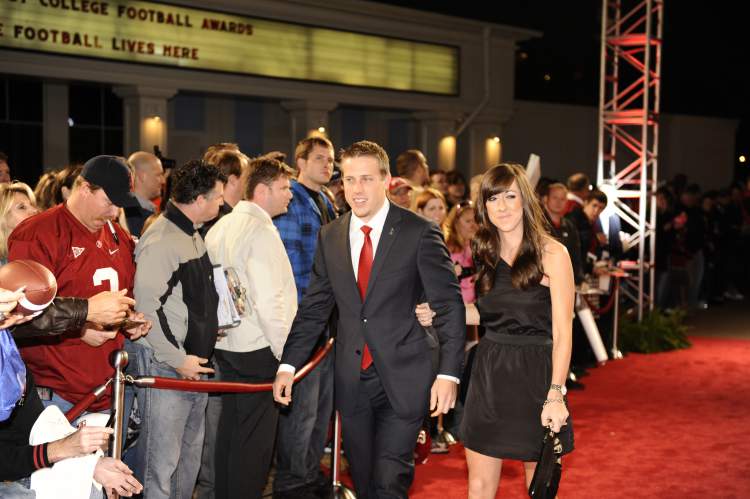 Case Keenum’s wife, Kimberly Caddell, has every reason to smile. Her Minnesota Vikings quarterback husband scored the game-winning touchdown, clinching the NFC North division. But Keenum owes a big part of his success on the gridiron to his amazing wife.

The Minnesota Vikings finished the 2017 season strong, and they owe it to their quarterback, Case Keenum, who owes his success to his amazing wife. Kimberly Caddell is the ideal WAG, who has supported her husband throughout his football career, as well as his ups and downs. Find out about the woman behind Case Keenum’s success in our Kimberly Caddell wiki.

It Started with a Snow Cone

Caddell and Keenum are both natives of Abilene, Texas and have known each other since middle school. They met when they attended the same church with their families as kids. However, they went to different high schools in Abilene and lost touch.

Years later, the high school students were set on their respective career paths. Caddell was going to attend Hardin-Simmons, a Baptist liberal arts school in Abilene, to study communications. Keenum secured a football scholarship at the University of Houston.

In junior year, Kimberly and Case met at an event and reconnected and he asked her out for a snow cone.

“One of his buddies worked at a snow cone stand,” recalled Caddell, “and he would invite Case to stop by. So we went and got snow cones after an FCA event, and ever since then, we’ve been together.”

By the end of his college career in Houston, Case proposed on the 50-yard line of the football field decorated with candles. How could she refuse?! They got married on June 11, 2011.

She Supported Him through Injuries

The couple dated throughout college and became closer at a turning point in Keenum’s collegiate career. In 2010, he tore his ACL during the University of Houston Cougars game against UCLA. He was forced to end the season early, and earned his Bachelors degree in business administration that year.

It's all in the hips. #SmoothMoves

The injury forced Keenum to rethink his options, and Caddell was with him every step of the way. “Kimberly and I definitely got closer [after the injury], just with how she took care of me,” said the quarterback about his then-fiancée. “I’m lucky to have found somebody who would love me that much and be there for me like that,” he added.

Before the injury, Caddell admitted she felt like she came second to football for her boyfriend. But since his viewpoint changed, she has supported him to get back into the game. “Priority-wise, everything changed,” she said adding, “Football was everything without him even really realizing it. Now, he’s learned that football is a game and it’s fun and he loves it, but it’s not his everything.”

At that time, Keenum hoped for a career in the NFL, but he also began considering a possible career as a coach. Nevertheless, a pro-career came calling when he was signed by the Houston Texans as an undrafted free agent.

She Helps Him with His Game

Kimberly is more than just the wife of an NFL pro. She thrived on sports even before she dated an athlete! An accomplished volleyball player in her youth, she was also a pole-vaulter for her school’s track team.

While she never played football, she was always associated with it. Case’s mom taught her P.E. in school. One of her favorite activities was watching football with her dad. Her two older brothers played football and she was always there to support them. As part of the student council, she got to be on the field for the coin toss during her school games.

With all of Caddell’s football knowledge, Case doesn’t shy from taking her help. The Rams’ relocation from St. Louis to L.A. was covered in the HBO documentary, Hard Knocks. But in this special, Case Keenum’s wife, Kimberly was the show-stealer.

During breakfast, she would quiz Keenum on the Rams’ playbook. She called out plays straight from their playbook, which she memorized to help him practice. During games, she’d listen to what he said in the huddle, and break down the plays for her fellow WAGS in the stands.

Secret to His Success

Being the wife of a pro-footballer isn’t easy, especially when it involves moving around a lot as he changes teams. Keenum played for the Houston Texans twice, the St. Louis Rams in between, and for the Rams again when the team relocated to L.A. Now, he plays for Minnesota and is keen to stay there.

Caddell worked with FCA’s Houston office as a marketing and event planner. However, since she moved several times with her husband, her professional status is not known.

She’s not active on social media, apart from appearing on her husband’s Instagram. Even if she doesn’t gush over her man online like other WAGS, she cheers for him in other ways. She started the tradition of “victory waffles.” Per the Keenum tradition that started when he played for the Rams, Kimberly makes waffles to celebrate a victory.

It started when the Rams were on a winning streak and Mrs. Keenum happened to make waffles on the Mondays following their wins. “We have to do it now,” Keenum said on Hard Knocks. “It’s been three in a row, and you can’t break tradition now. That’s how superstitions are made.” The Keenums have now carried this tradition to Minnesota.