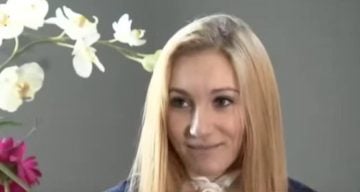 Carley Allison is a former figure skater, who publicly fought a rare cancer. Though she passed away, she is remembered by her family and boyfriend, John Servinis. Now, the biopic, Kiss and Cry keeps her legacy alive.

The world was enthralled by one teen’s voice and story a couple of years ago. Her name was Carley Allison, and she was a Canadian figure skater whose dreams came to a sudden halt when she was diagnosed with a rare one-in-three-billion form of cancer. She recorded covers on YouTube and documented her battle in over 200 blog posts. Though she may have lost the battle, she left behind a story worth sharing. Her inspiring story is now the subject of the biopic, Kiss and Cry. It depicts the romance between Carley Allison and John Servinis, who was her boyfriend. Here’s more about Carley Allison’s boyfriend, John Servinis.

He Broke the News of Her Death

The 19-year-old Carley Allison had become a social media phenomenon with her YouTube covers of chart-topping hits and her blog posts. With her efforts, she helped raise money for cancer research. She did all this while undergoing chemotherapy —even singing with a tube down her throat. During her battle, not only was her family by her side, but her friends and boyfriend, John Servinis, were there too.

A couple of weeks after she posted a blog about her second week of chemo saying she’s doing great, on March 31, 2015, Carley’s sister, Riley, and Servinis were guest-writers. They broke the news to her followers that Carley Allison had passed away.

“After a hard week in the hospital, this morning Carley had passed away. She left memories and a legacy that will live on forever in our hearts and minds. She never quit fighting until her last breathe; she showed more strength than anyone thought was possible.”

Carley Told Him They’d Get a Movie

When the movie on Allison’s life premiered two years after her death, her family was happy about it. They said that if she was alive, she would have loved the movie because she always loved the spotlight.

While she was undergoing treatment, she watched the critically acclaimed movie, The Fault in our Stars (2014). The movie, adapted from John Green’s novel of the same name, follows two cancer-stricken teens who meet at a support group and fall in love. She hinted to Servinis that their story could be made into a movie too because “Our story is so much better.”

Where is John Servinis Now?

Servinis was very active on Instagram posting about his time with Allison when she was celebrating life. He returned to Instagram a few weeks after her death, this time keeping her legacy alive with Carley’s Angels, a group started by Allison to raise awareness and funds for cancer research.

When he’s not leading the Conquer Cancer bike ride by the Carley’s Angels Foundation, he’s traveling to places like Mexico. He’s also hanging out with his younger sister, Athena and Carley’s younger sister, Samantha. He’s also getting ready to follow in the footsteps of his father and study dentistry at the University of Western Ontario.

It also appears that Servinis takes care of Carley’s precious dog, Tobi Bella, who is a half-husky and half-Pomeranian. Carley referred to herself as Tobi’s Mama and now Servinis calls himself Tobi’s Daddy. Servinis and Carley’s sisters also have a special Instagram for Tobi Bella.

The Kiss and Cry cast is much talked about since Allison’s best friend, Sarah Fisher, will be playing Allison. They were best friends and aspiring singers in high school, so it’s fitting that Fisher plays Carley in the movie about her.

Fisher, who is best known for her role on MTV Canada and TeenNick’s Degrassi: The Next Generation, reunited with her Degrassi co-star, Luke Bilyk for Kiss and Cry. Bilyk plays Servinis in the movie and they’ve even displayed their friendship on Instagram. Servinis also joined the rest of the film’s crew to promote Kiss and Cry.

For more details on Kiss and Cry, visit the movie’s official website.