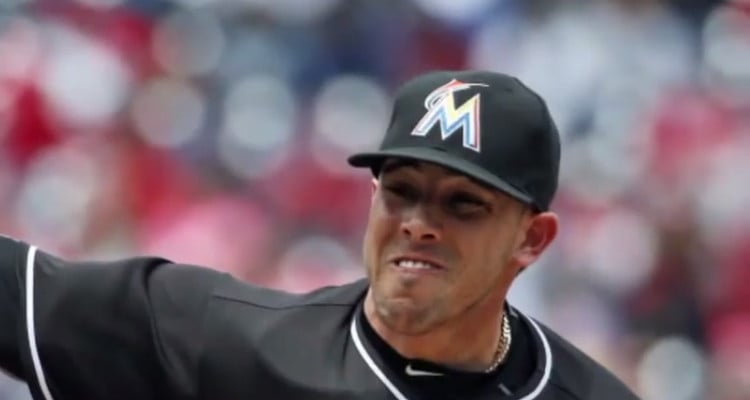 With heavy hearts, major league baseball fans are mourning the untimely passing of the Miami Marlins’ star pitcher, Jose Fernandez. Fernandez was just 24 years old, but he was already considered one of the best pitchers in Major League Baseball. Carla Mendoza, Jose Fernandez’s girlfriend was pregnant with Fernandez’s child, when he met with a terrible boating accident that claimed his life. Two other people aboard the boat have also died in the crash. The unfortunate boating accident happened on September 25, 2016 and both Fernandez’s team mates and his numerous fans are still in a state of shock.

The Picture that’s Worth a Thousand Words

The net is awash with the reports of the beloved black and white photo on Jose Fernandez’s Instagram, which shows his girlfriend, Carla Mendoza cupping her baby bump. It was announced that they were expecting a baby together earlier this month, and the Marlin’s ace was simply ecstatic. In the photo, Mendoza is wearing a bikini, walking along the beach, cradling her pregnant stomach. In the caption of the picture that Fernandez posted, he said that he was so happy that Mendoza came into his life. He also wrote, “I’m ready for where this journey is gonna take us together.” He hashtagged it, “#familyfirst,” which makes the picture that much more heartbreaking.

Fernandez and Mendoza were not very public with their romance when he was alive. They kept a low profile and very little information is available about Mendoza. However, last year in September, people got wind of their relationship when they started kissing and embracing on the field. The occasion was that Fernandez became the first pitcher in MLB history to win his first 17 home starts! After this PDA, it was evident that the pair were now officially a couple.

After Jose Fernandez’s death, the media is trying to get more information about his girlfriend, Carla Mendoza, but there are very few details available about her. Though Mendoza is not Jose Fernandez’s wife, there is an Instagram picture where Carla actually calls Fernandez her beloved husband. The user name of this mysterious account is @carlamendoza_16, but it is not confirmed as yet if this Carla is indeed Fernandez’s girlfriend. Intriguingly, the bio reads, “Heroes are remembered but legends never die…RIP my beloved husband, Jose.” The two may have never been confirmed as legally married, but there’s no doubt Mendoza considered Fernandez the beloved man in her life.

Now that Fernandez has left behind a girlfriend and a child yet to be born, people are asking about Jose Fernandez’s net worth. It is a modest $3.0 million, because he was just starting out his professional baseball career. He was just 24 years old when he lost his life in this unfortunate tragedy. Carla Mendoza was not married to Fernandez at the time of his tragic death, so it is unclear right now if she and her yet-to-be-born baby have any legal rights over Fernandez’s wealth. One thing is for sure, that is probably the last thing on Carla Mendoza’s mind right now, as she mourns the loss of her love, and father of her unborn baby.

People are already talking about what a lovely couple Fernandez and Mendoza made. He was handsome with a perennial smile, while she was gorgeous with dark black hair and glowing skin. With such good looking parents, there is no doubt that the baby will also be beautiful when he or she arrives. Fernandez’s family are all in shock, as are his teammates. Fernandez was a live wire both on and off the field. He was destined to be one of the all time MLB greats. It is sad that such a promising life came to such an unexpected end. Nobody is more grief stricken than Carla Mendoza herself. In this dark hour, our hopes and prayers are with Carla Mendoza and her baby.