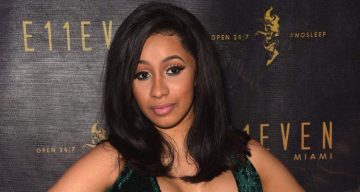 Jimmy Fallon did something on The Tonight Show that he’s never done before—he had a cohost for the evening! The first cohost alongside Fallon on The Tonight Show was the remarkable Cardi B! Get the scoop from the new queen of entertainment’s stint as cohost here.

Okurrr! Clearly 2018 is the year of Cardi B! The newly-crowned queen of entertainment just dropped a pregnancy bombshell on an amazing episode of SNL, not to mention her music career is soaring.

We saw Cardi B’s entertaining chops back when she was a guest on The Tonight Show Starring Jimmy Fallon with her quirky connotations and hard-not-to-love personality. Now, she’s back on the show as a cohost this time!

Here’s what a pregnant Cardi B had in store for her Tonight Show gig.

Cardi B on The Tonight Show

Last week, The Tonight Show revealed that Cardi B would be hosting the April 9th episode and fans couldn’t wait for it! After all, we still can’t forget how thoroughly entertaining she was when she appeared on the show back in December 2017.

Cardi B entered The Tonight Show stage alongside Jimmy Fallon and left us in stitches with her opening monologue. On the rapper’s part, she’s pretty psyched about being the first late-night host that “isn’t a white guy.”

Fallon had a few things in store to celebrate Cardi’s cohosting gig. Among his first surprises was a video of President Donald Trump singing “Bodak Yellow,” Cardi B’s trademark hit. Sure it was a mashup of different clips, but that was the closest we’d get to the president rapping!

They also debuted a new segment of “What is up with that Coat?” Woohoo! The mom-to-be hilariously ribbed a picture of a very unflattering coat on President Trump.

And now we want her to have her own show where she gets her own “special chair” behind the cool desk.

To add to the fun, Cardi B and Fallon also have an intense game of  “Box of Lies”.

Cardi B came clean about her pregnancy on Saturday Night Live. And, she made her late-night debut as a cohost on The Tonight Show on Monday.

In commemoration of her pregnancy news, Fallon decided to test just how popular Cardi B is among moms. The moms hilariously failed in Cardi B trivia while their kids turned red in secondhand embarrassment.

Cardi B might think moms don’t like her because she swears too much, but we love her more now.

To top off an already fabulous night, Cardi B performed “Money Bag” from her debut studio album, Invasion of Privacy.

Even Fallon became a fan. And just before they went on air, Fallon sent the rapper a gift for her baby.

The pregnant artist shared the basket of goods from Fallon on Instagram. Among the presents, there was a child-sized cheetah-print fur-coat and a bedazzled bottle.

Check out Cardi B’s opening monologue below and don’t miss how she demotes Jimmy Fallon to a stool on his own show. You do you, Cardi!