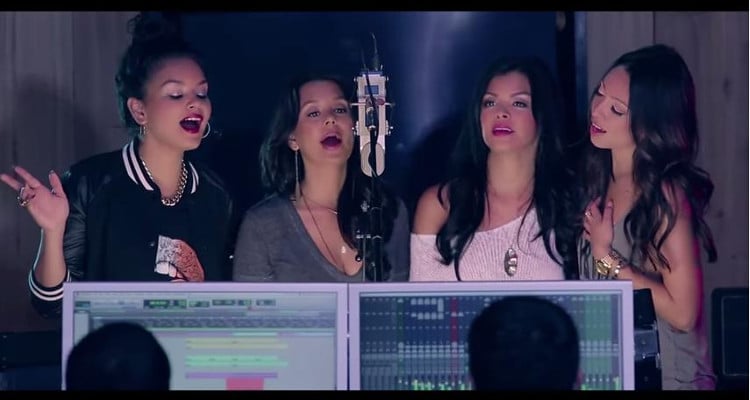 Bruno Mars is at the top of his game after the Grammy 2018 nominations were announced. Jay-Z raked an impressive eight nominations, and Mars came in pretty close with six. The Hernandez family are doing great in the music industry, and Bruno Mars’ sisters’ group, The Lylas are the talk of the town again!

Bruno Mars’ four sisters’ group, The Lylas formed in 2013, and the drop-dead gorgeous women showed how talented they are. Bruno Mars’ sisters are Presley, Tiara, Tahiti, and Jaime. Check out these five facts about The Lylas right here!

Lylas stands for Love You Like a Sister, an apt title for the group, making the package all the more exciting. Not only are the women sisters of one of the biggest names in music, but they show a bond so strong, people are instantly drawn to them. The Lylas formed in 2013, and the group even bagged a reality show on WeTV.

#2. Who Are the Hernandez Sisters?

She is also an important member of The Lylas, and graduated from Kaiser High School before moving to LA. Jaime has a big heart which is why she started an organization called 4 m.a.m.a earth back in 2007. The non-profit organization is dedicated to making the world a more positive place through music, art, and nature.

Tiara Hernandez: Tiara is 33 years old, and was born on September 26, 1984. She was a preschool teacher before taking up music full-time, and the second oldest sister shares a talent for music and art, along with the rest of her successful siblings.

Their parents were both artistically inclined, with their mother being a hula dancing, and their father being a percussionist.The kids inherited their parents’ talents, and Tiara wasn’t left behind. She has a good voice, and with her three sisters, rocks the stage every single performance.

Tahiti Hernandez: Born on June 2, 1987, Tahiti’s age is 30. The bombshell of the family had a passion for music and singing since she was three, and everybody always knew she would make it big in music someday. She is a mother of four, with boyfriend Billy Kemper, and delivered her youngest in 2016.

Presley Hernandez: The youngest chica of the lot, Presley’s name was inspired by the most iconic singer of all time —Elvis Presley. She was born on July 23, 1990, making her age 27. Like her siblings, was born and raised in Hawaii, and followed in her brother’s footsteps after he rose to fame.

#3. What Happened to Their WeTV Show?

In 2013, WeTV announced that Bruno Mars’ sisters are coming together with the first episode of The Lylas aired on November 8, 2013. The reality show began with how they stepped into the world of music after their brother’s success. The first episode showcased how they left their hometown Hawaii and moved to L.A. to pursue music.

Some drama that came their way when they began having differences with their manager, and the Hernandez sisters began training and meeting important industry people.

It was fun to watch Bruno Mars’ sisters’ journey, but after eight episodes, The Lylas TV show ended after their mother’s death, to allow the family time to recover.

#4. The Lylas Songs You Should’ve Heard

The Lylas were very short-lived in the reality TV world, but the girls really made an effort with music. Some of their tracks were really appreciated by fans, and some that went without recognition. Here are top 3 The Lylas songs you ought to listen to: “Come Back,” “Headed Home,” and “Voices” feat. Bruno Mars

If you didn’t know, Fifth Harmony named their band Lylas before it was changed after The Lylas sued The X Factor contestants. They wanted to rename their group 1432, which stood for “I Love You Too,” but Simon Cowell didn’t approve, and after some contemplation, they went with Fifth Harmony.