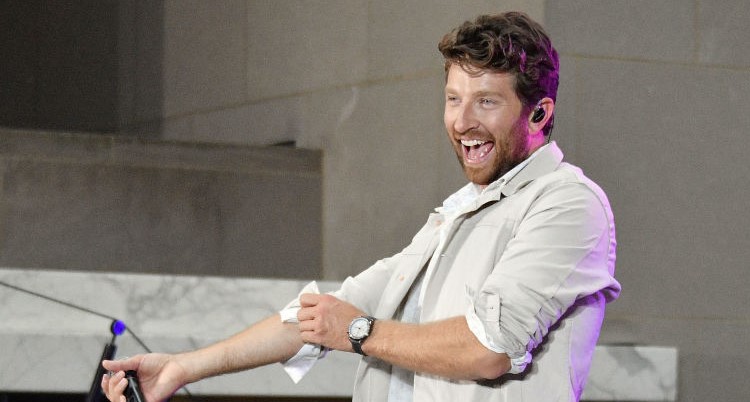 Many have speculated that Brett Eldredge’s dating timeline has, or will include at some point, Sadie Robertson. If you ship these two, sorry to burst your bubble—but there’s really no confirmation that they’re an item. But that doesn’t mean it still can’t happen! The pair looked insanely adorable together in Eldredge’s music video for his song “The Long Way,” but that doesn’t mean he’s in love. He’s explained before that the song is simply about what he hopes to find in a relationship in the future.

“Maybe I’m not in love at the moment, but I am writing songs [that express] what it will feel like when I do find that. I hope that people who have already found love or need to be hopeful in finding it can hear that and be like, ‘Oh [yeah, I can relate].’ Because that’s my favorite thing about music, is relating in a way that’s like, ‘Man. I’m not the only one out here that’s feeling like they’re stranded on an island, finding stuff, looking around like, ‘I guess this is how it’s always going to be,’” Eldredge told Pop Sugar.

So, he’s not dating Sadie Robertson. Is Brent Eldredge really single? When CBS sat down with him, he confirmed that he is, in fact on the market—however, he may not stay on it for long. Apparently, he gets a ton of offers to be set up, which he finds pretty funny sometimes:

“It is funny how some girls will introduce me to their mom or whatever or their mom will be like, ‘I need you to meet my daughter she’d be perfect for you.’ It’s so funny for me because I mean I’d love to meet their daughter I mean you never know you never know. But I’m being single right now just taking my time and trying to find the right thing…”

Well, it seems like he’s enjoying his time being single, but who knows how long it’ll be before get gets snapped up.

According to his Instagram, it doesn’t seem like Brett Eldredge and ex-girlfriend drama go together. The only love in his life that we can see is his pup, Edgar! When asked if any of his songs were inspired by his cute pup, he mentioned that Edgar’s in a little of many of the songs on his new album, since his day is always brightened by the love he shows him.

Pop Sugar also asked Eldredge about what he’s looking for in a potential partner—so take notes, ladies and gentlemen. He said that he’s looking for someone adventurous and spontaneous, and that can roll with life’s punches. While his public persona is very high energy, he admitted that he does need time to recharge, and that he can be shy at times.