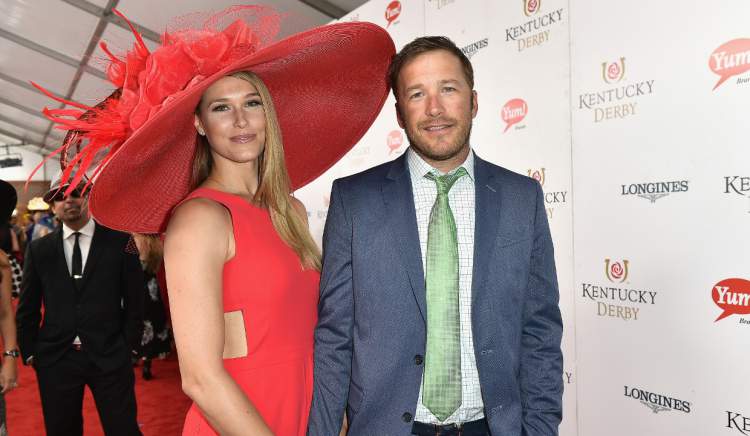 Bode Miller, a pro skier and NBC commentator at the 2018 Olympics, recently made an unsavory comment about marriage and female athletes. Now, all the attention is on Bode Miller’s wife, Morgan Beck, and their own marriage.

Bode Miller has said things in the past that can be considered “out there.” But his latest comment takes the cake.

While working as a commentator at Pyeongchang, Miller suggested a female skier’s decline is because of her marriage! He later apologized, but the damage was done.

Now, everyone’s asking if the skier is speaking from experience. Miller is married to an athlete, too.

Learn all about Bode Miller’s wife with details from Morgan Beck’s wiki below.

Morgan Beck is from Newport Beach, California and was a professional volleyball player. After graduating from San Clemente High School, she attended the University of California, Berkeley.

At that point, Beck was already gaining attention as a hitter. She made four school records in high school, including 544 kills in a season. She was named South Coast League MVP, All-CIF Southern Section, and All-Orange County first team.

As a freshman Golden Bear at Berkeley, Beck was selected to the Pac-10 All-Freshman team. She was also a member of the USA Junior National team that competed at the Under-20 World Championships in 2005.

Morgan Beck is one of three children born to Ed and Cindy Beck. She has a sister, Erin Margolin, and a brother named Garrett Beck. Her cousin, Brandon Beck, also attended Berkeley and played collegiate golf.

The volleyballer even modeled on the side. Beck has been named among the hottest female athletes by several publications. And, she even starred in a Nike ad campaign.

Thanks to her volleyball career and modeling stint, Morgan Beck’s net worth is approximately $1.0 million.

Beck and Miller tied the knot in October 2012, five months after they started dating. The skier confessed that she initially spurned his advances because she didn’t want distractions while playing.

The couple got married on the skier’s luxurious yacht. But it was as intimate as it can get.

Miller reportedly hand-picked the flowers and arranged the bouquet for Beck. Meanwhile, the bride-to-be baked the wedding cake!

Although we’re sure there was plenty of room on his yacht, they didn’t have any guests at their wedding! The only ones present were the officiant (who needed some rest because he had a heart problem) and the photographer. Oh—and their cat.

The athletic couple topped the wedding with room service from a nearby hotel and were in bed by 9:30 p.m.

Miller has since sold his yacht and bought a house in Coto de Caza, where his wife grew up. He even built a volleyball court in their backyard for her.

Happy 2 year wedding anniversary to my best friend, soulmate and husband @millerbode You're the best thing that's ever come into my life. I love you ?❤️

She Loves the Men in Her Life

Beck’s father, Ed Beck, is an army vet. She often expressed her admiration for her dad in posts, and she even named her son after him.

As for Miller, she clearly loves him if she can forgive him after hitting her with a golf drive two months into their marriage! It was an accident, of course, and she even posted a picture of her nasty injury. It required 50 stitches, but there was no vision damage thanks to her sunglasses!

A huge thank you to @Kaenon By absorbing a 160mph line drive I only got 50+ stitches instead of losing my eye #lucky pic.twitter.com/SysxulDr

Miller and Beck have a son, Nash Skan Miller (born in 2015) and daughter, Emeline Grier Miller (born in 2016). They announced the new additions to their families on their respective Instagrams. But it was more of the kind of announcement that had everyone’s attention.

Both children had water births at the couple’s home. When their daughter was born, they made an announcement on Instagram with a very revealing post.

The skier, the model, and their newborn baby girl are naked in the shot. Miller is holding their son while his little sister is resting on her mother’s bare chest.

Beck is also stepmom to Miller’s children from previous relationships. He has a daughter, Neesyn Dacey Miller (born 2008), with Chanel Johnson.

Miller also has a son with Sara McKenna (a model) who was born in 2013. She named him Samuel while Miller calls him Nate, after his brother who passed away.

Morgan Beck and Sara McKenna allegedly had a public catfight during a bitter custody battle for Miller’s son.