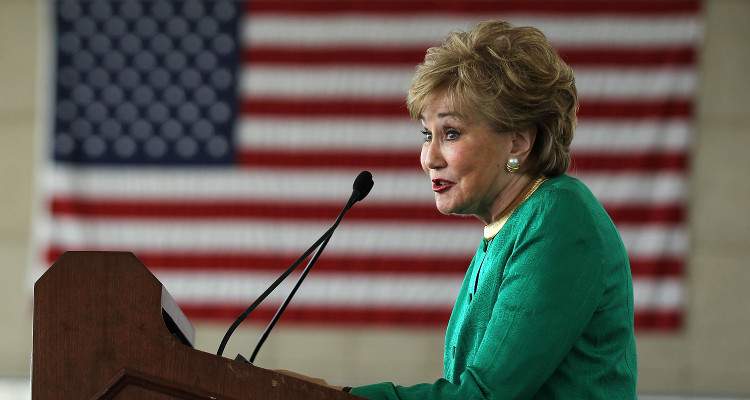 Former Senator Bob Dole was awarded the Congressional Gold Medal on January 17, 2018. The ceremony took place at the U.S. Capitol rotunda, in the presence of President Donald Trump and House Speaker Paul Ryan. Credits were awarded to Bob Dole’s wife, Elizabeth Dole, for her impressive work. Don’t worry, we have all the details about the woman behind Bob Dole’s success in this Elizabeth Dole wiki.

President Donald Trump praised former Senator Bob Dole, whom he called a “true American hero,” when saying that he did a “good job.” While many people were speculating if Elizabeth Dole was alive, she was there for the proud moment. And, she even read the rest of her husband’s speech.

So, what is Elizabeth Dole doing now? Keep reading to find out!

Elizabeth Dole was born on July 29, 1936, in North Carolina, making her age 81. She went to Duke University and graduated with distinction in political science in 1958.

Dole was in the Phi Beta Kappa Sorority in college. She also received the Algernon Sydney Sullivan Award.

After graduating, Dole went to Oxford for post-grad work and earned her Master’s degree from Harvard. She then went on to obtain her Juris Doctor from Harvard Law in 1965.

Bob Dole met his wife in 1972. After dating for three years, the duo got married in December 1975. Elizabeth Dole is Bob Dole’s second wife.

Although the couple did not have children, Elizabeth Dole is stepmother to her husband’s daughter, Robin Dole, from his 24-year marriage to Phyllis Holden.

Service to the Presidents

In 1973, during the Nixon administration, Dole was appointed to the Federal Trade Commission. She became a Republican in 1975.

A big year for the Doles was 1976, as Elizabeth Dole went on leave from the Federal Commission to support Bob Dole’s unsuccessful campaign for vice president.

Today, Senator Bob Dole will be presented with the Congressional Gold Medal in recognition of his service to the Nation as a Soldier, Leader, and Statesman. Watch the event live at 3pm EST here: www.speaker.gov/live. Thank you, Senator Bob, for your life long service to our Nation. We are proud to honor you today. #CongressionalGoldMedal #SenatorBobDole #BobDole #SenatorDole #Honor #Recognition #Proud #AmazingMan #Congratulations #Soldier #Leader #Statesman #Hero #LifeLongService #NationalPride #NationalService #GratefulNation

Under the Reagan administration, Elizabeth Dole was appointed Secretary of Transportation. She was also in charge of task forces that set out to reform federal and state laws regarding women’s rights.

Dole served as the Secretary of Labor during the Bush administration. And by 1991, she was president of the American Red Cross, where she served until 1999. She did not accept a salary during her first year.

? Remembering #PrincessDiana today, 20 yrs after her death: #TBT to June of 1997 when she attended the @americanredcross gala at the museum. ? Pictured with American Red Cross President #ElizabethDole (left) & NMWA founder #WilhelminaColeHolladay (right). #Diana20

Elizabeth Dole ran as a Republican nominee in the 2000 U.S. presidential election but pulled out after facing inadequate funds.

In 2001, Dole moved from her Watergate Complex condo to Salisbury, North Carolina, so that she could be elected to the U.S. Senate.

Dole was successful in her attempt, defeating Democratic nominee Erskine Bowles by an eight-point margin. As her husband was the former Senator of Kansas, she became the first Senator whose partner successfully earned a seat from another state.

Elizabeth Dole served as Senator from 2003 to 2009, where she worked with senators like Chuck Hagel to improve housing financing regulations. However, the bill did not go up for a vote.

At the time, Dole was part of many Senate committees for Armed Services, Banking, Housing and Urban Affairs, Aging, as well as Small Business and Entrepreneurship.

By 2012, Dole retired from the White House, but not from helping people. She started the Elizabeth Dole Foundation, which is dedicated to the military and their families.

Their mission statement reads, “Strengthen and empower America’s military caregivers and their families by raising public awareness, driving research, championing policy, and leading collaborations that make a significant impact on their lives.”