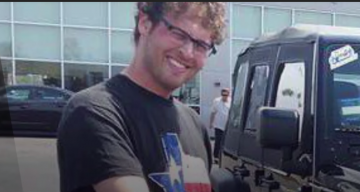 CBS’ 48 Hours recently brought the case of Blake Leibel into the spotlight again in 2020. The Canadian-born man was known for his wealthy background before the brutal murder of his fiancée, Iana Kasian, in 2016. He was arrested and tried for the murder that many have said read like a crime-thriller script. Since the interest in this case was regenerated, the Internet wants to know where Blake Leibel is. We explain the convicted criminal’s whereabouts here.

Blake Leibel was born on May 8, 1981 in Toronto, Canada. His parents were wealthy, with both coming from prominent Canadian families.

Leibel’s mother died in 2011, and he has been estranged from his father since at least 2013. He moved to Los Angeles, California where his career was based in 2004, while his parents remained in Canada.

Before he was a convicted murderer, Leibel was described as a comic book creator, graphic novelist, screenwriter, and fledgling animated film director.

He directed the 2009 film Bald, starring Jonathan Cherry and Sally Kirkland (the movie went directly to DVD). He also authored such books as Syndrome, United Free Worlds, and To Hell and Back OGN.

Blake Leibel was convicted of the 2016 murder of his Ukrainian girlfriend, Iana Kasian. The victim was 30 years old at the time of her death. According to the autopsy, Kasian was scalped and bitten, and her blood was drained. She was tortured for eight hours before she died.

“[Kasian’s] entire scalp was traumatically absent and was not found, was not present with the body,” Dr. James Ribe said. “Her skull had been stripped down to the surface of the bone…there was no scalp present except for little bits in the back of the neck.” A portion of Kasian’s face was also torn off, including her right ear, according to the autopsy.

Her jaw also showed signs of trauma, which could reportedly be bite marks.

Kasian gave birth to Leibel’s daughter in April 2016. The child was found unharmed and in the care of Kasian’s mother who was visiting from Ukraine.

Officers arrested Leibel, who had allegedly barricaded himself in the apartment he’d shared with Kasian, on May 26, 2016. Her body was also reported to be found in the apartment.

Leibel pleaded not guilty to charges of murder, torture, mayhem, and aggravated mayhem. He was convicted of first-degree murder, with supplemental charges of torture and mayhem, in June 2018.

Where Is Blake Leibel?

After his conviction, Leibel was sentenced to life in prison without the possibility of parole. He’s currently serving his sentence at the California Correctional Institution in Tehachapi.

Leibel’s defense team has made attempts to overturn his conviction. His legal team contended that the trial court judge abused his discretion by allowing evidence built from the graphic novel Syndrome, which Leibel had written with several other people. The novel reportedly contained scenes that paralleled the circumstances in which police found Kasian’s body.

A state appellate court panel upheld the 2018 conviction and the California Supreme Court rejected his request to review his conviction in 2020.

In 2019, a Los Angeles Superior County Court judge ordered Leibel to pay $41.6 million to Kasian’s family in a wrongful-death lawsuit. An attorney representing the family said the money would allow Kasian’s mother, Olga, to raise her granddaughter in Ukraine.

Leibel filed for divorce from his now ex-wife, Amanda Braun, when she was eight months pregnant with their second child. Leibel left Braun for Kasian, who was also pregnant at the time.

Through her lawyer, Braun released this statement: “Our family is shocked and saddened by this tragedy. It has been very difficult for me and my family to process exactly what has occurred. At this time, I ask that our privacy be respected. I will have no further comment.”

On May 20, 2016, almost three weeks after his daughter was born, Leibel was arrested on an unrelated sexual assault charge against a third woman. Her name has not yet been released to the public. He was released on bail of $100,000, and the status of this case is not known.

After the rape allegation, Kasian went to live with her mother Olga. She reportedly had returned to the couple’s apartment to talk to Leibel when the murder occurred.