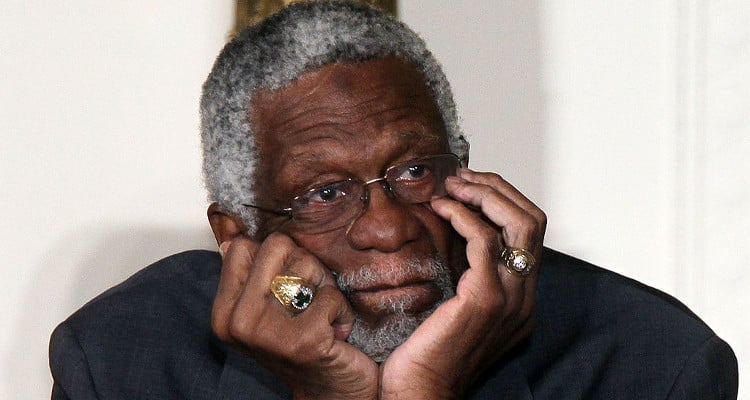 The first NBA Awards 2017 was broadcast live from New York last night. Bill Russell was honored with the Lifetime Achievement Award. But really, he needs another award for being the coolest guy there.

Clearly, age is just a number for Bill Russell! NBA’s most iconic player was honored with the Lifetime Achievement Award at the NBA Awards ceremony last night. But he stole the show for talking smack to five NBA legends, saying he could kick their ass! You were a great host Drake, but maybe Russell should host the NBA Awards next year! You know he could still give NBA players today a run for their money. To prove that, take a look at our Bill Russell wiki, right here.

He Grew Up Struggling with Racism

William Felton Russell was born to Charlie and Katie Russell in 1934 in Louisiana. That makes him 83 years old. Racial discrimination was prevalent in southern towns like West Monroe, where Russell was born. The Russell family faced racism in their day-to-day lives.

His father was once denied service at a gas station until the staff had attended to the white customers. When his father tried to go to another station, the attendant threatened him with a shotgun to stay and wait his turn. During a separate incident, a police officer once approached and stopped his mother for wearing “white women’s clothing” when she was wearing an outfit she made herself.

Russell’s father moved his family to Oakland, California to find work when the basketball legend was eight years old. The family fell into poverty and Russell spent his childhood in public housing projects. His father worked as a janitor in a paper factory, before working as a trucker. When Russell was 12, his mother passed away, so his father became a steelworker to be closer to his children.

He Struggled with Basketball

It’s hard to imagine that Bill Russell initially found basketball to be a problem. In his early years, he struggled to understand the game, though he had the physique and skills for it. He was cut from his junior high school team, and was almost let go from his high school team, until his coach recognized his raw athletic potential.

Coach George Powles helped Russell work on his fundamentals. Since Russell had previous negative experiences with white authority figures, it was nice for him to hear encouragement from his white coach. Russell worked hard under Powles and by his junior and senior years, he started excelling and won back-to-back high school state championships.

Despite his impressive improvement, he was ignored by college recruiters until a University of San Francisco recruiter saw him during a game. He wasn’t impressed by the young player’s performance, but saw Russell’s potential. So, when USF offered him a scholarship, Russell immediately accepted. His college coach, Phil Woolpert, became the first coach of a major college basketball squad to train three African-American players: Bill Russell, K. C. Jones, and Hal Perry. But the team faced racist jeers during games. While at a tournament, when the hotel authorities refused to let them stay, the team camped out in front of a college dorm in protest. Russell said all these experiences hardened him, but at the same time made him a team player.

You Snub Russell, He Snubs You

Russell felt insulted when Harlem Globetrotters owner, Abe Saperstein would speak only to his coach and not him. Sensitive to such prejudice, Russell declined their offer to join their exhibition team. He said that if Saperstein was too smart to speak with him, then he was too smart to play for Saperstein. He then worked harder and was eligible for the 1956 NBA draft.

The Boston Celtics had their eye on Russell, but were too low in the draft order. However, they eventually managed to get the players they wanted who would go on to become Hall of Famers: Russell, K.C. Jones, and Tom Heinsohn. Russell was infamous for his rivalry with Heinsohn.

Russell played for the U.S. national team in the 1956 Melbourne Olympics before his NBA rookie year. In fact, the U.S. basketball team went on to win a gold medal that year. He could not join the Celtics until December because of the Olympics, but when he did, he impressed the Boston crowd with his defense skills. He also got some negative press when, tired by Knicks’ Ray Felix’s provocation, he punched the man unconscious, paid a fine, and was no longer a target of cheap fouls.

Astounding Achievements On the Court

He was the first African-American in the league to gain superstar status, despite his battles with racism. Throughout his career, he has earned a net worth of $10.0 million, and won more championship rings than Michael Jordan and Shaquille O’Neal combined! To this date, he owns the record of maximum rings, a whopping total of 11.

Bill Russell Off the Court

During the last few games of his career, Russell’s numbers were declining and many believe his failing marriage was the cause of it. At the time, he was married to his college sweetheart, Rose Swisher, whom he tied the knot with in 1956 and divorced in 1973. They have three children: A daughter, Karen, and sons, William Jr. and Jacob.

During his post-retirement and coaching period in the NBA, Bill Russell married Miss USA, Dorothy Anstett, in 1977. But their mixed-race marriage wasn’t without controversy, and they divorced in 1980. He married his third wife, Marilyn Nault, in 1996 and they were together until her death in 2009.