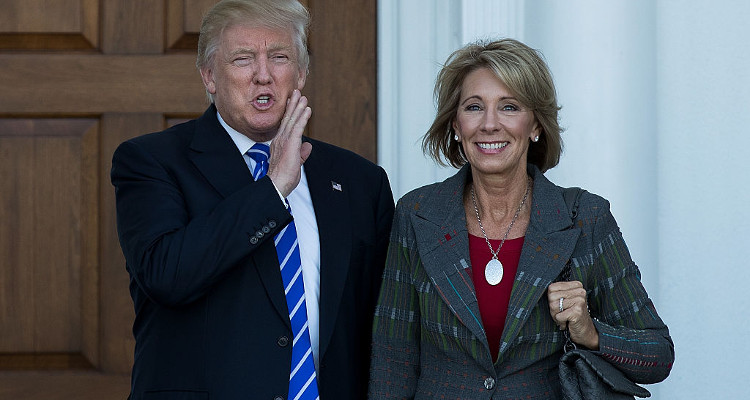 Here are four facts to know about the new education secretary, Betsy DeVos, appointed in President-Elect Donald Trump’s administration, including her wiki and net worth.

Real-estate mogul, Donald Trump is all set to move into the Oval Office in January 2017, and his transition team is hard at work to ensure that the Trump administration has a smooth entrance into the White House. The 70-year-old Republican President-Elect is tasked with the appointments of his cabinet and has come under fire for his considerations to lead several departments and ministries. Ever since he nominated fellow billionaire, Betsy DeVos to head the U.S. Education Department, American voters are scouring social media to find out more about Betsy DeVos’ wiki and Betsy DeVos’ net worth. Here are four interesting facts to know about the new education secretary:

#1. She Married the Heir of the Amway Fortune

The 58-year-old Republican donor married Richard “Dick” Marvin DeVos Jr. in the 1980s. He is the son of Amway co-founder, Richard DeVos. Dick DeVos unsuccessfully ran for the Michigan Govenor’s office in 2006, and he stands to inherit billions from his father, who is currently ranked as the 88th richest person in the world according to Forbes. Dick DeVos served as the president of Amway for two years before joining the investment management firm Windquest Group. The family also rakes in millions from the purchase of the Orlando Magic basketball team in the early 1990s, and is well-known for their very generous $3.0 million contributions to the Republican party.

Dick and Betsy DeVos’ net worth is estimated to be around $5.1 billion. The happily married couple own homes in Ada, Michigan as well as the Grand Rapids. Besides these residences, the wealthy couple own a yacht and three more houses in Windsor, Florida, in addition to a 21,885 square foot Victorian vacation home in Michigan. The power couple currently lives in a waterfront home, valued at $10.0 million, while shuttling between their multiple homes throughout the year.

#3. She is Against Common Core and Advocates for Charter Schools

While several Republican party members are unhappy that DeVos has previously served on the board of an organization that supported Common Core, a statement on her website reads otherwise. “Certainly. I am not a supporter—period. I do support high standards, strong accountability, and local control. When Governors such as John Engler, Mike Huckabee, and Mike Pence were driving the conversation on voluntary high standards driven by local voices, it all made sense,” she said.

However, President-Elect Trump has pledged to get rid of the Common Core (a set of high-quality academic standards in English language arts and literacy (ELA) and math) that outlines the learning goals and capabilities of a child in each grade. DeVos believes that each and every child “deserves access to a quality education” regardless of their parents’ occupations. “Have organizations that I have been a part of supported Common Core? Of course. But that’s not my position. Sometimes it’s not just students who need to do their homework. However, along the way, it got turned into a federalized boondoggle,” said DeVos.

The well-known philanthropist wears many hats as a businesswoman, politician, and education activist. While she has previously served as the chairman of the Michigan Republican Party, the mother of four is currently the chairman of the Windquest Group, the Dick and Betsy DeVos Family Foundation, as well as the American Federation for Children. DeVos and her husband are proud parents to two sons, Richard DeVos III and Ryan DeVos, as well as two daughters, Andrea DeVos and Elisabeth DeVos. Rick DeVos III works at the Windquest Group as an urban development consultant.