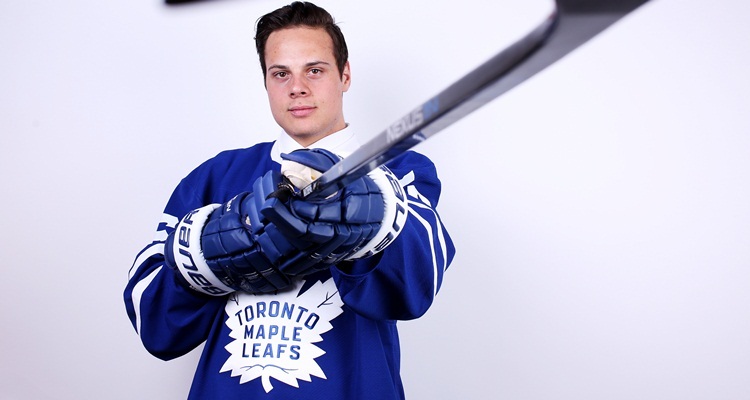 Toronto Maple Leaf’s rookie player, Auston Matthews made a historical NHL debut last night! He scored a record four goals for his team against the Ottawa Senators. Here’s everything you need to know about this young ice hockey star.

Auston Matthews has set the bar high with his first game. The Toronto Maple Leafs rookie became the first player to score four goals in his NHL debut. Individually, his performance has gained a lot of attention since he played in the Hockey World Cup. After seeing what he did in Wednesday’s game, there is no doubt Matthews is going to make it big in ice hockey. With all the spotlights focused on Matthews, naturally, we want to know more about Ice Hockey’s fastest rising star. So, we’re bringing you our Auston Matthews wiki with everything you need to know about him and his family.

When Matthews was 18, he was drafted into the Swiss Elite League in Zurich. He missed the opportunity to join the NHL because of the arbitrary age eligibility. Years ago, the NHL and NHL Players Association had set the arbitrary cut-off date as September 15. Matthews’ birthday is September 17, just two days after the NHL drafting eligibility! He was drafted into the NHL in June of this year and made a spectacular debut.

#2 From Arizona to Zurich

Matthews was born in California before his family moved to Arizona when he was still an infant. His father, Brian, is Californian and his mother, Ema, is from Mexico. He knows Spanish thanks to his mother. Matthews has two sisters, as well: Alexandria, who is three years older than he is and Breyana, who is five years younger than he is. Matthews’ father used to play baseball and his uncle was once an NFL player!

Matthews once played baseball and his favorite position was catcher. But he was not the type to stand and wait for some activity while playing, and baseball was clearly too slow of a sport for him. So, he followed his passion for hockey. From Arizona, he joined hockey training camps and played in the Canadian Junior Leagues. After missing the NHL draft, he joined the Swiss ZSC Lions, which began his professional hockey career.

Matthews was home-schooled and took on a massive number of courses so that he could enroll in college. The 19-year-old enrolled in some online courses at the University of Nebraska,while he played hockey in Switzerland. He had his mother and elder sister there with him, and Alexandria would help him with his homework. Matthews and his dad spoke on the phone daily and his mother prepared his breakfasts and dinners in Zurich.

Matthews’ mother was overjoyed with her son’s NHL debut performance. She even cried tears of joy watching Matthews fulfill his childhood dream of playing in the NHL. Ema, along with the rest of the family, is extremely supportive of her son. Ema worked two jobs just to help pay for her son’s hockey expenses, because Brian’s income wasn’t sufficient enough after providing for the entire family.

Ema and her eldest daughter, Alexandria, had gone to Switzerland with Matthews and she made sure her son was well-fed there! Matthews usually had lunch with his Swiss teammates during practice, but he had his Mama there to cook him his other meals. On his 18th birthday, Ema prepared chicken tortilla soup for her son’s whole team. The soup was such a hit that all the players’ wives were asking for the recipe!

#5 His Uncle Introduced Him to Ice Hockey

Matthews’ father and grandfather played baseball but his uncle, Billy Matthews, was a footballer and was also the one who introduced Matthews to ice hockey. Brian and Billy were the ones who took Matthews to his first hockey game (the Phoenix Coyotes) when he was only two years old. When he was six, Matthews began shooting pucks at the rink. Billy died of complications from cystic fibrosis before he could see Matthews make it to the National League. Athletics must run in the Matthews family’s blood because Matthews’ great-uncle was Wes Matthews, who was also an NFL player for the Miami Dolphins in the ‘60s!

With his record number of goals in his first NHL game last night, Auston Matthews has kicked off what’s inevitably going to be a spectacular ice hockey career.