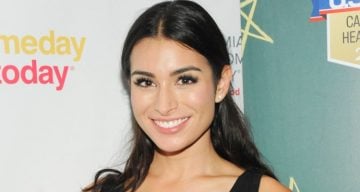 After last night’ Bachelor in Paradise and its after-show, After Paradise, fans are still recovering from the events that transpired. We wouldn’t be surprised if some of the viewers needed a day off work to gather themselves after everything that happened in Paradise over the last two days. After a very Ashley-centric episode, fans are dying to know more about the serial crier, have been Googling terms such as “Ashley Iaconetti parents” and “Dr. Jay Iaconetti.” In order to get you up to speed, we are giving you all the facts from our Ashley Iaconetti wiki.

Originally from Great Fall, Virginia, Iaconetti now lives in Wayne, New Jersey, while working in New York City, but we’ll give you more on that later. Not much is known about her upbringing but we know that Ashley Iaconetti’s nationality is Italian.

She may be commonly known as Ashley from Bachelor in Paradise but before that she was known as Ashley from season 19 of The Bachelor, starring Chris Soules as the leading man. From that moment on, we got a taste of Ashley Iaconetti, “the girl who cries” and she hasn’t stopped since. (Crying, that is.)

When things didn’t work out with Soules, Iaconetti turned to Bachelor in Paradise season two, for love, where she met Jared, a man responsible for more of her famous crying.

Now, Iaconetti is getting another chance at finding love on season three of Bachelor in Paradise and so far, all the 28-year-old has done is cry! Cry me a river? More like cry me an ocean! Will Iaconetti find a man to dry her tears? Or at least give tears of joy for a change?

Aside from being known for her association with the Bachelor franchise, Iaconetti is known for crying even more. Ever since she walked onto our TV screens, she’s been caught on camera with watery eyes and a red face. She reminds us of that Seinfeld episode, where jerry’s girlfriend of the week cried for everything, except when her grandmother died—that was weird. In Iaconetti’s case–she’s the last person you would want to bring to a funeral. She’s also a Pisces, so that explains her sensitivity, though not all Pisces are that sensitive.

Iaconetti is also famously known as a “self-proclaimed virgin” and we’re sure people have given her looks about it. She has stated before that she’s waiting for the right guy and won’t settle for less.

This may come as a surprise but Iaconetti isn’t just a crying face, she’s a brain too. After retiring as a nanny, she graduated with a Master’s in Journalism from Syracuse University in upstate New York. Ashley Iaconetti’s job is working as a freelance writer for Cosmopolitan, where she writes about the Bachelor in Paradise.

Though she was raised by both parents (who she is grateful to for supporting her) we’ve only seen Ashley Iaconetti’s father, Dr. Jay Iaconetti. According to his LinkedIn account, he is an anesthesiologist for MEDNAX, a medical practice in Washington, D.C. He made an appearance on After Paradise last night via Skype and supported his daughter’s crying. He also gushed about how proud she has made him.

It seems Iaconetti is aiming for Kardashian status because she is all over reality TV. The Bachelor alum is going to be on an episode of Million Dollar Matchmaker and even the show’s host Patti Stanger said she cries a lot, despite how much she likes her.

For more stories on the Bachelor in Paradise, follow this link.