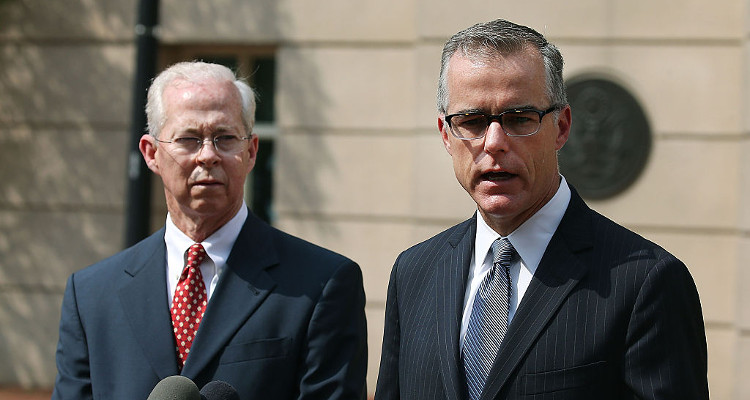 Andrew G. “Andy” McCabe was born in 1968. He graduated from Duke University in 1990 and later obtained a J.D. degree from Washington University in St. Louis. While studying law, McCabe interned in the criminal division of the United States Department of Justice. After law school, he practiced in a private firm for three years before joining the FBI in 1996.

The 49-year-old lives in Broadlands, Virginia with his family. He has a son and a daughter, and his wife, Dr. Jill McCabe, is a pediatric emergency physician at the Inova Loudon Hospital in Virginia.

On January 9, 2016, former FBI Director James Comey appointed Andrew McCabe as Deputy Director of the FBI. McCabe assumed those duties on February 1, 2016, after Deputy Director Mark Giuliano’s retirement. As a deputy director, McCabe led investigations ranging from terrorism and organized crime to the inquiry into Hillary Clinton’s use of a private email server.

Comey was dismissed by President Trump on May 9, 2017, and McCabe became Acting Director of the FBI.

In the beginning of the Trump administration, McCabe likely violated FBI rules by possibly divulging classified content. In February 2017, the acting FBI director had conversations with White House Chief of Staff, Reince Priebus about the FBI’s inquest into Russian meddling in the 2016 election.

When Donald Trump was campaigning, rumors were rife about Andrew McCabe’s wife being funded by Terry McAuliffe, a close friend of Clinton. Dr. Jill McCabe had allegedly accepted about $700,000 in contributions from Clinton allies facilitated by McAuliffe and the Democratic Party of Virginia. Consequently, McCabe was blasted by a campaigning Trump who said, “The man who was in charge of the investigation of Hillary Clinton accepted essentially from Hillary Clinton $675,000 that went to his wife.”

McCabe has also faced questions from Republicans about his impartiality in the investigations of Clinton’s email server. He was further blasted for his oversight in the probe into Russian interference in the 2016 election.

#Comey promoted #AndrewMcCabe to the #2 #FBI position despite his conflict of interest during his wife's campaign against me. #Corrupt pic.twitter.com/5a9dBhNYyX

Andrew McCabe was also criticized for breaching other FBI rules which do not allow employees to engage in or support political agenda or party. Republican Richard Black took to Twitter to bash McCabe for supporting his wife during her campaign.

Remember how #FBI agents are not allowed to campaign? Rules don't apply to acting FBI Dir #AndrewMcCabe when he's campaigning for his wife. pic.twitter.com/zavPCive4K