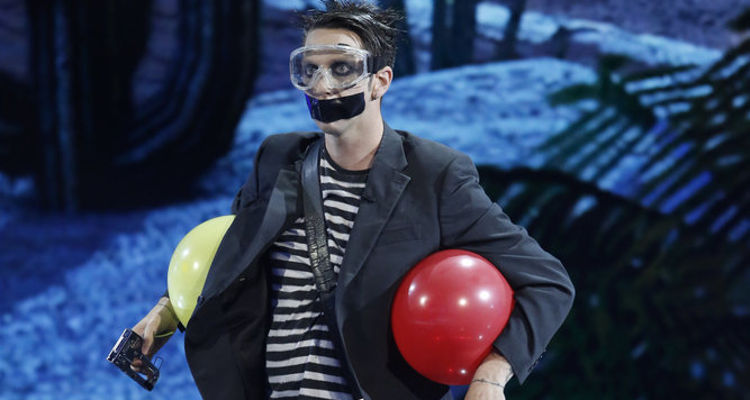 Comedian and mime, Tape Face has become a household name, thanks to his enthralling performances on season 11 of America’s Got Talent. Fans of the hit reality show have been Googling terms like, “Tape Face identity,” “where is Tape Face from?,” “Tape Face name,” “does Tape Face talk?”, “Tape Face real face,” and “Tape Face wife,” so don’t go anywhere else; we’ll tell you everything you need to know about The Boy With Tape On His Face right here, including his identity, name, wife and where he is from.

Tape Face, whose real name is Sam Wills, is a 38-year-old comic, mime and busker. (A busker is another term for a street performer.) The multi-talented New Zealand native was featured in the New Zealand International Comedy Festival, the World Buskers Festival, and is currently a contestant on season 11 of the hit reality show, America’s Got Talent. His unique routines utilize a combination of physical comedy, mixed with creativity and silence. The performer is a favorite of AGT judge, Howie Mandel.

sorry for the lack of posting! i just started working & i’m starting school soon & meghan (the other owner of this account) just started school today so we’re busy

According to Wills’ description on his official website, “New Zealand’s foremost funny freak presents a show with more stunts, more mayhem and more stupidity than you can shake a juggler at. With cucumbers, orange juice and various weapons of (not so) mass destruction, Sam is a one man recipe for disaster that will have you in stitches…no really, he may actually have you in stitches. Seriously.”

who does everyone want the dunkin save to be??

Tape Face began performing at the tender age of thirteen as an apprentice clown. Besides mastering a wide range of performance skills and styles, he also holds a diploma in New Circus from the Christchurch Polytechnic Institue of Technology’s Circus School. The prop-comic taught juggling at his alum for two years. In 2002, Sam Wills moved to Auckland and became a resident comedian at SKYCITY Auckland’s casino. Along with his stint on AGT, he also has his own weekly show called the NCB Comedy Hour, which is currently in its fourth year on the air, and has made an appearance on Pulp Comedy, a TV2 show. He even performed at the world premiere of The Lord of the Rings: The Return of the King in Wellington, New Zealand.

For fans asking who Tape Face’s wife is, we’ll have you know that he is a married man and a father, as well! Wills has been married to an English burlesque performer since 2009. She goes by the name Lili La Scala, but her real name is Felicity Redman. The happy couple tied the knot in a “symbolic wedding” as kick-off to 2009’s World Buskers Festival in Christchurch. They were legally wed in England the same year.

In 2013, Wills and Redman had their first child, a son who they named Rafferty Basil Danger Wills. In an interview, Felicity explained the interesting choice of name for their son saying, “We thought Danger Wills was a good busker name. Basil Wills is a good accountant’s name and Rafferty Wills is a good name if he wants to become an actor luvvie. We thought it would be great if he could actually say, ‘Danger is my middle name’. That is just for us.” Keep an eye out for Tape Face on tonight’s episode of the America’s Got Talent Live Results show! Fingers crossed he makes it through to the next round!