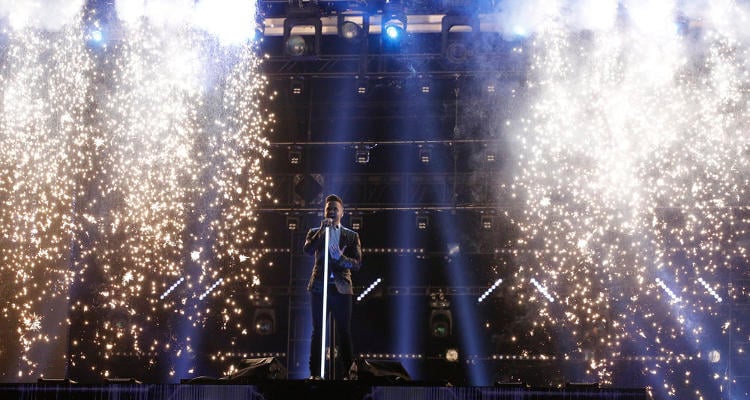 They don’t make em’ much sweeter than Sal! Opening up the evening, this stylish “swooner” took to the stage first with his larger-than-life rendition of “Mack the Knife.” It couldn’t have felt more like a Las Vegas show, as Sal’s energetic and flawless performance wowed both the judges and the audience. Simon was only displeased that it wasn’t longer!

The silent mime with the black eyes and taped mouth has pleased the people yet again with another comedic routine. This time, Tape Face somehow incorporated a toilet seat, two toy horses, and his main prop Mel B herself, into a performance that had the judges and audience in stitches –except of course, the butt of the joke, Mel B!

This hilarious mime continues to baffle the judges with how extraordinarily well he transforms nothing into something wonderful.

The Ukrainian juggling sensation stunned the audience and the judges with a routine that looked to be straight out of an apocalyptic movie with thunder, lightning and darkness. This time, Viktor incorporated in dark, interesting dance routine around his masterful juggling skills, and literally set the stage on fire with his solid performance. Simon said he felt like he was watching a movie!

Brian sang his heart out for all those in the LGBTQ community who have been bullied or tormented because of their differences. His rendition of Michael Jackson’s “Man in the Mirror” surely sent chills down the spines of the viewers, as it was slow and tasteful, and simply full of emotion.

Likely the highlight of the evening, America’s sweetheart, Grace Vanderwaal took to the stage and lit up the room. She’s inspiring people from all over the world, as a montage of YouTubers was shown playing their own versions of her songs.

Armed with her ukulele and her distinctive voice, she simply floored the judges with another original song, yet again! At only 12 years old, the judges can’t believe how this young performer has stolen the show. Howie called her “Amazing Grace” and said, “America vote! Grace has to win!”

All of the other contestants simply wowed the judges and not one of them had anything really negative to say. After all, this is the finals and the stakes are much higher, so each of the contestants are certainly giving it their all!

Opera singer Laura Breton‘s performance had Simon Cowell scratching his head over the fact that she’s only 14 years old. Mel B admitted that she felt the songstress’s nerves, but that it really did not affect her performance all that much.

The Clairvoyants stumped the judges yet again. This time, Amelie guessed the numbers and expiry date on Simon’s credit card from the inside of a 20 ton tank of water!

It’s anyone’s guess as who could be announced as the ultimate winner, so be sure to tune in tomorrow night (Wednesday, September 14) to catch the second half of the most exciting America’s Got Talent finale yet.