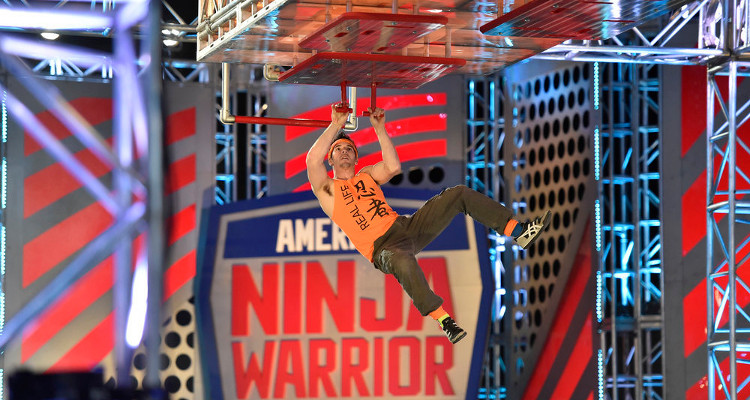 Tonight’s competition had a four-stage obstacle course in Las Vegas; the first stage being tackled by the contestants in the previous episode. The finale began with the second stage of the Mount Midoriyama course, which included the giant ring swing, down-up salmon ladder, wave runner, and the wall flip. The second stage turned out to be a near-impossible hurdle for the contestants, as only two out of the 17 contestants made it to the next level!

The youngest contestant, 21-year-old Michael Torres, was the first to go and the first to fail. He lost at the first stage, after slipping off the Ring Swing. Jessie Graff is the first female in ANW history to compete Stage 2 in Vegas. She had a rocky turn on the obstacles, but got farther then most of her male competitors! However, she tumbled while making the transition at the Wave Runner. Grant McCartney of Knoxville was at Stage 2 the second time. However, just as in 2015, he couldn’t overcome the Salmon Ladder. Neil Craver, McCartney’s buddy on the show, was on stage 2 for the third time. However, he too fell at the Wave Runner and lost at the second in Vegas stage for the third time. Joe Moravsky quipped that he only fell once per season. He’s always made it to Stage 3 in the past seasons, but this time his hope to reclaim the title of ‘The Best’ crashed, and he shockingly failed at the Wave Runner.

Drew Dreschel and Daniel Gil, the only ones to cross the previous level, faced the even more difficult Stage 3. Stage 3 was packed with one difficult obstacle after another. Dreschel and Gil had to get past the Keylock Hang, Floating Boards, Ultimate Cliffhanger, Curved Body Prop, Hang Climb, the new Walking Bar and then the Flying Bar. Dreschel, who was facing the same course for the second time, was defeated by the Hang Climb. This is the same hurdle that cost him his victory in 2015, so he was stunned to be defeated by the Hang Climb for the second time. Gil didn’t make it as far as his fellow-competitor. He slipped off the Cliffhanger. The loss brought Gil to tears, as he felt he let down a lot of people.

As no competitor made it to Stage 4, American Ninja Warrior season 8 had no official winner and no claimants to the cash prize! However, Drew Dreschel is considered a winner for making it the farthest in the third stage. Both contestants vowed to train harder to have another shot at the invincible obstacle course.