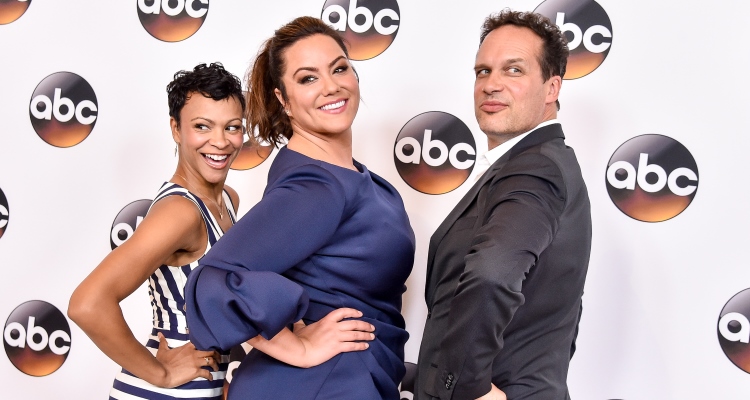 ABC is bringing viewers another underdog-focused series with the American Housewife Season 1 Premiere. The show centres around characters who struggle to overcome their constraints as made by their communities, similarly to the Taiwanese immigrants from Fresh Off the Boat, and the family of a child with cerebral palsy in Speechless. If you want to learn more about the American Housewife cast, or want to watch American Housewife online, stay tuned for facts you need to know.

On Tuesday at 8:30 p.m. EST, tune into ABC to get a first glance at the star family and the challenges they face in their town in Connecticut. You can watch it on the ABC network or stream the episode on the ABC website to watch it online. Check out the premiere trailer here:

Katy Mixon, who played Katie Otto in American Housewife, told EW, “She lives in a surreal world where she is authentic and the family is authentic, living in an inauthentic world.” Diedrich Bader (Greg Otto) added, “[It’s] about this family a little older than millennials for example, but they’re really truly heroic in a certain sense because they go into this environment and they really proved themselves to be above it.”

The show was created by Sarah Dunn and it follows Katie Otto, who is a “well-nourished” stay-at-home mom of three living in Westport, Connecticut amongst wealthy, fit neighbors with “big houses and tiny butts.” Although Katie is neither fat nor poor, she is made to feel that way by the comparison of her physique to the size zeros in the community. Katie instantly feels like a misfit with her “cozy” rented house and a daughter plagued by anxiety and Obsessive Compulsive Disorder (OCD). When she finds out her neighbor (referred to only as “Fat Pam”) is moving away, Katie is officially the new “fattest housewife in Westport.” Katie and her husband decide to find a “largerish-type gal” to buy Fat Pam’s house, and relieve Katie of her current status.

According to the LA Times, although the show is viewed in a charitable light, some may feel the show is unnecessarily cruel and regressive. For example, when Greg observes a plus-size, prospective home buyer he says, “There’s no getting around her on the sidewalk.” Thankfully for Katie, she is surrounded with other “underdog” friends, Angela and Doris, who also stand out amongst the “cookie-cutter” town, and give her a boost of confidence and support.

If you’re concerned about the weight talk in the season 1 premiere, LA Times reported the second episode will ditch the topic almost entirely, and soften the harshness. Check out the premiere tonight to make your own judgments!