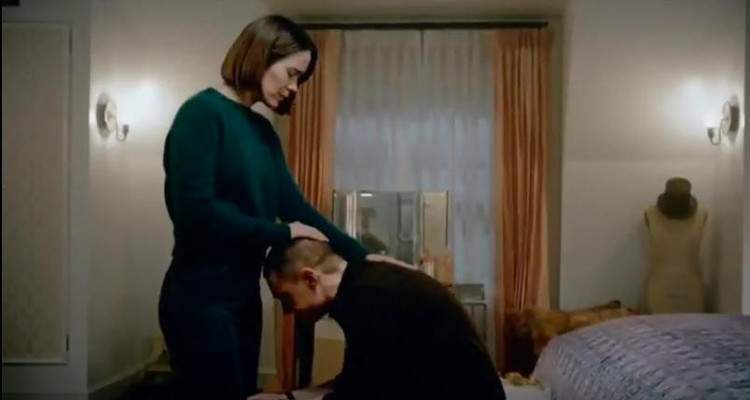 The ending of American Horror Story: Cult left us with so many questions. The final clash between Sarah Paulson’s character, Ally, and Evan Peters’ Kai, was greatly satisfying. But there are a lot of questions about how they reached that point. It begins where the finale episode ended with Kai going about his usual cult business —but in jail! But, why is Kai in jail? Keep reading for the breakdown about that mind-blowing ending of AHS: Cult, right here!

This year, AHS got political. So the American Horror Story: Cult finale was appropriately named “Great Again,” as the setting is at another election. This election will be misogynistic Kai Anderson’s swan song after he tormented Ally and left a pile of corpses in his wake. But how does Kai get to that point?

The episode opens in 2018, a time jump from the previous episode. Kai is seen rocking prisoner garb in a maximum-security prison, which does nothing to dampen his cultic tendencies. He has a female prison guard named Gloria under his submission and about to join his cult.

Then, two inmates crash Gloria’s pinky-swearing induction ceremony. They ask Kai to join them for a walk, which ends with one of them beating this killer clown in the bathroom. Just as he is about to murder Kai, the second inmate stabs the other in the head and calls Kai “Divine Leader.”

Go ahead, put your prison pinky up Trevor. #AHSCult pic.twitter.com/HZVEpJjop4

Kai is also having hallucinating conversations with Charles Manson (also played by Evan Peters). These two murderers are so comfy with each other that Kai calls him Chuck! And Chuck then orders Kai to get rid of the second inmate, too.

So, now we know that Kai has been in prison for 11 months. And, it so happens that a prison makes for even better cult propagation, as his sing-sing cult has 16 members and counting. We’re not sure if Gloria was officially initiated, but the air is thick with misogyny.

Kai declared, “While women destroy the world outside, we wait safely for our time to strike.”

But how did Kai end up in jail? Well, about 11 months earlier, Kai was struck by a bolt of inspiration from his invisible friend, Chuck. Like Sharon Tate’s murder by Manson’s followers, Kai decided that murdering 1,000 pregnant women would catapult him to cult status.

Murder is not the only thing wrong with this plan. Kai’s over-ambitious goal hits a roadblock.

However, Kai concludes that murdering 100 pregnant women is doable and demonstrates to his followers how to kill both the mother and unborn child. And he insists that both die otherwise the “message is lost.”

So, what’s Kai’s endgame? Rile up womankind until the cult overthrows the current senator, clearing his path to the White House.

Beverly is so terrified of Kai that she wants Ally to kill her and end it. But Ally persuades her to hang in there.

Ally reveals to Kai that the cult member, Speed Wagon, who she killed in the previous episode, was actually a police informant. This means Kai killed his sister for nothing and he breaks down, leaving Ally to console him.

But now it’s Ally who’s working with the FBI. She gets the Feds to move in on Kai just when he and his men are about to commit mass murder.

After a massive shootout, Kai is arrested. Beverly is overjoyed that Kai got his just desserts. But, “The Divine Leader” vows revenge.

The series jumps forward 11 months. And Kai is seen living the cult life in prison.

Meanwhile, Ally has rebuilt her life. She has a new girlfriend, and she’s running for Senate. But she’s still associated with Kai’s cult, and it’s not bringing her popularity up.

Neither Ally nor Beverly is held accountable for the cult’s crimes. Ally had immunity for helping the Feds bring Kai down.

Beverly, who’s living a normal life now, got off scot-free as Ally explains, “Beverly, you didn’t fit the profile. A black woman in a cult of angry white nationalists.”

Ally rubs in Kai’s face that he’s not Ozzy’s father and he foams at the mouth. He’s all the more furious when he sees her announce her bid for the Senate, something he meant to do.

Kai sets off on his revenge plan. He first murders a recruit he got matching tattoos with. He cuts off this inmate’s face, and with the matching tattoos, authorities would think it’s Kai. Then with Gloria’s help, he escapes prison.

Once out, Kai crashes Ally’s first TV debate and mouths off about justifying killing women. At the end of his “I hate women” tirade, he points a gun at Ally’s head. It’s the gun from his female prison guard friend, but he’s in for a rude surprise.

The gun is not loaded. So, it turns out Gloria is on Ally’s side!

Talk about a humiliated man. #AHSCult

Ally got the last word and said, “You were wrong. There is something more dangerous in this world than a humiliated man…a nasty woman.”

And before Kai can rattle off another counterargument, Beverly shoots him in the head.

Finally, Ally rides the “nasty woman” vote to the Senate. She’s seen sporting the green cloak, a hand-me-down from Bebe Babbit, as she’s ready to meet “empowered women who want to change the system.”