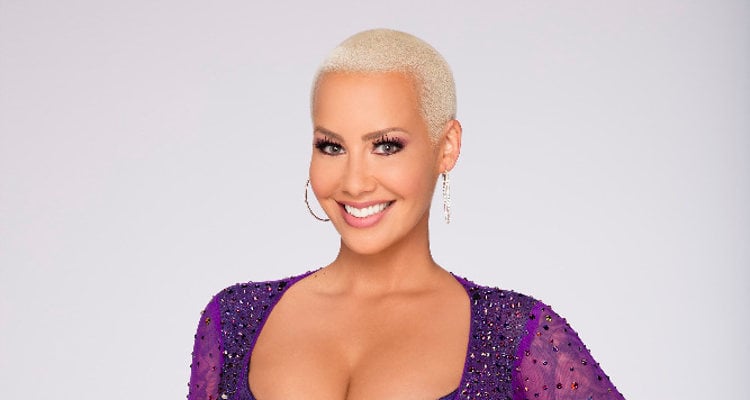 If you’re wondering who Amber on Dancing with the Stars is, we’ll have you know that she is a woman of many talents. Amber Rose is a model, actress, fashion designer, singer, entrepreneur and talk show host. In the latest news, the 32-year-old star joined the cast of the dancing reality show, Dancing with the Stars season 23. Fans of the show are curious to know more about the celebrity, and are searching the internet with inquiries like, “who is Amber on Dancing with the Stars?” Well, you’ve come to right place, and we’ll tell you everything you need to know about Amber Rose’s surgery, pictures, marriage, dating life and her background.

Here are five facts you need to know about the Dancing with the Stars season 23 contestant, Amber Rose:

Fans are always wondering if Amber Rose is African-American. Well, she is biracial, which means she is of mixed race. Rose was born on October 21, 1983, in Philadelphia, Pennsylvania. Her father, Michael Levonchuck is Irish-Italian, while her mother, Dorothy Rose is of Scottish and Cape Verdean descent. She also has a brother named Anthony Hewlett, who prefers to stay out of the spotlight.

#2 She Wears Many Hats

Rose is a model, actress and fashion designer. She has appeared as a judge on reality shows like RuPaul’s Drag Race season 3, as well as Master of the Mix season 2. In 2012, Rose released singles, “Fame” and “Loaded.” Subsequently, she launched her own clothing and eye-wear line, and authored a book titled, How to Be a Bad B***h.

In 2016, Rose released her own emoji app called Muvamoji and became the host of her own talk show on VH1 titled, The Amber Rose Show. Last but not the least, Rose joined the cast of ABC’s hit reality show, Dancing with the Stars, along with pro partner, Maksim Chmerkovskiy. Is there anything Amber Rose can’t do?

????As you all know I love to waist train! I get the best results #waisttraining using my cincher from @LittleTinyWaist I wear mine 6-8 hours a day. And I LOVE it! ❤ I lost 3 inches which create that hourglass ???? Ladies the Best Project you can work on is Yourself(Remember that!) Get yours at www.Littletinywaist.com <http://www.littletinywaist.com/> (Use code Amber & get 20% off) #ThankMeLater #HowToBeABadBitch #LittleTinyWaist

To provide for her family after her parent’s divorce, Rose began stripping at the young age of 15, under the pseudonym, Paris. Rose began her rise to fame in 2008 with rapper Ludacris’s video, “What Them Girls Like,” after which she caught the attention of Kanye West. From 2009-2010, she made cameos in music videos like Nicki Minaj’s “Massive Attack,” Young Jeezy’s “Vacation,” Wiz Khalifa’s “No Sleep,” and Fabolous’ “You Be Killin’ Em.” Rose posed for Louis Vuitton and was signed by Ford Models.

#4 She Used to Date Kanye West

Rose was in a two-year relationship with rapper Kanye West from 2008-2010. In an interview, she blamed Kanye West’s now-wife, Kim Kardashian for their split, calling her a “home-wrecker.” After their breakup, she began dating rapper Wiz Khalifa, and the happy couple were engaged in 2012. Subsequently, they had a son named Sebastian Taylor Thomaz, and got married in July 2013. Just when it seemed like Rose had finally got her happy ending, she filed for divorce from Khalifa in 2014. Citing irreconcilable differences, Amber requested custody of their son but as of 2015, the former couple shares custody of their three-year-old son.

#5 She is Bisexual and Helmed the Sl*tWalk

In a 2009 interview about her sexual orientation, Rose clarified that she was “extremely open” with her sexuality. She could be in love with a woman or a man and finds “beauty in everybody, whether they’re heavy-set, super-skinny, if they’re white, black, Indian, Asian, Spanish.” Last year, Rose led the L.A. based “Sl*tWalk” in honor of all the women who had ever been judged for their promiscuous behavior. You go, girl!