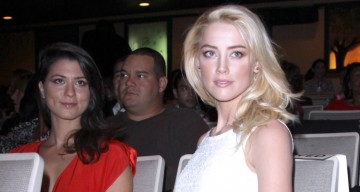 With all these rumors and sightings speculating, you’ve got to wonder; are Amber Heard and Elon Musk dating? Many have been asking “Who is Amber Heard dating now?” It’s a valid question since there have been reports of Amber Heard hanging out with Elon Musk, and it doesn’t look like they’re discussing business. But is she really dating Elon Musk? Read on to find out, with our Amber Heard dating timeline.

Before becoming Mrs. Johnny Depp, Heard was publicly dating 40-year-old photographer and artist Tasya van Ree. The pair dated from 2008 to 2012 and reportedly did everything they could to be considered legally married, since gay marriage wasn’t official at the time. The two were domestic partners and very much in love at the time. Heard came out as bisexual at a GLAAD event in December 2010, stating how beautiful her girlfriend (Ree) was and just how lucky she was to date her.

The 30-year-old Friday Night Lights actress met 52-year-old Pirates of the Caribbean star Johnny Depp on the set of the film, The Rum Diary, where the two played each other’s love interests. At the time, Depp was in a committed relationship with his domestic partner, Vanessa Paradis.

After breaking up with Paradis, Depp and Heard started dating in 2012 and things were going well. Depp even bought Heard a horse at the time as a gift. After two years of dating, the pair were engaged in 2014 and were married in 2015.

Fast forward to now, reports emerged of Depp being abusive to Heard, who was shown with bruises on her face. Heard filed a restraining order against Depp and then filed for divorce. The two are now exes, as of this year.

So, where does the 45-year-old billionaire CEO of Tesla, Elon Musk, fit into all of this? Sources say that Heard has known the Tesla inventor for several years, but in the last few months they’ve been spending a lot more time in public. To be fair, friends do spend time together in public and there’s nothing sinister about it. If they were in fact dating, it wouldn’t surprise anyone since Musk is also getting a divorce from on-again-off-again wife, Talulah Riley.

There are reports that Musk has been spending an increased amount of time at Heard’s home and no one in her camp is calling it “dating.” Musk has kids of his own, but that won’t scare Heard off. She got along well with Depp’s two children.

Musk’s net worth is estimated between $11.0 to $12.0 billion, which makes Depp look like a pauper at this point. Even if Depp doesn’t pay taxes, he still couldn’t catch up with a net worth that massive! Who could?

So, are they just catching up or are we catching on to their secret romance? No official word yet, but we will keep you posted!