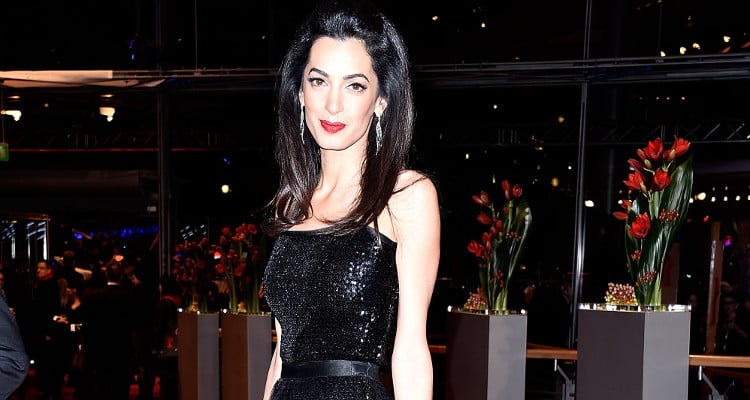 Amal Clooney’s birthday is on February 3, and she will be 39 this year! People are speculating that this will be a special year for George Clooney and his wife, as there are rumors that Amal Clooney is pregnant and due in 2017!

People have been looking closely at Amal Clooney’s latest pics and have pointed out what they believe to be a baby bump! This comes on the heels of news from family friends claiming that Amal Clooney is pregnant with twins, and is expecting this year! Amal Clooney’s age will be 39 on February 3, and we are sure the couple will celebrate in style. Learn more about George Clooney’s wife in our Amal Clooney wiki, right here!

Amal Alamuddin was born on February 3, 1978 in Beirut, Lebanon. During the Lebanese Civil War, her family fled Lebanon and moved to Gerrards Cross, Buckinghamshire in England. Her father, Ramzi Alam Uddin has an MBA from the American University of Beirut, and was the owner of COMET travel agency. He moved back to Lebanon in 1991. Amal Clooney’s mother, Bariaa Miknass is a foreign editor of the Pan-Arab newspaper, al-Hayat. She is also the founder of International Communication Experts, a public relations company. Amal Clooney has one sister named Tala, and two half-brothers named Samer and Ziad.

Amal Clooney went to Dr. Challoner’s High School, an all-girl grammar school in Little Chalfont, Buckinghamshire. She then attended St. Hugh’s College, Oxford where she had a scholarship, and was given the Shirgley Award. She graduated with a BA in Jurisprudence in 2000.

In 2001, Clooney went to the New York University School of Law to get her Master of Laws (LLM). Additionally, she was received the Jack J. Katz Memorial Award for entertainment law.

Amal Clooney can legally practice law in the United States and the United Kingdom. She was also a part of the team that represented WikiLeaks founder, Julian Assange in his extradition trial. She has represented many high-profile cases, including former Ukrainian Prime Minister Yulia Tymoshenko, former Libyan intelligence chief Abdullah al-Senussi, Enron, and has also represented imprisoned Al Jazeera journalist, Mohamed Fahmy.

The United Nations designed a three-member commission to find rules of war violations within the Gaza Strip, and selected Amal Clooney to be a part of it. She declined the offer saying, “I am horrified by the situation in the occupied Gaza Strip… I am honoured to have received the offer, but given existing commitments — including eight ongoing cases — unfortunately could not accept this role. I wish my colleagues who will serve on the commission courage and strength in their endeavors.”

Apart from law, Amal Clooney is also a lecturer. For the 2015-2016 school year, Clooney was a visiting faculty member as well as a Senior Fellow at Columbia Law School’s Human Rights Institute. She also had criminal law lectures at Law School of the School of Oriental and African Studies, The New School in New York City, the University of North Carolina at Chapel Hill, and the University of London.

George Clooney’s wife’s net worth is estimated to be $2.0 million, and is a result of her hard work and dedication. Her cases have affected the UN Special Tribunal for Lebanon in addition to the International Criminal Tribunal for Yugoslavia. She has represented the country of Cambodia, Lybia’s head of intelligence Abdallah Al Senussi, and the King of Bahrain as an associate of the Bahrain Independent Commission of Inquiry, a governing body chaired by Professor Cheri Bassiouni.

George and Amal Clooney were first spotted together back in October 2013, with his rep stating that the two were “just friends.” Nobody believed it, as the two were spotted looking cozy while on a safari in Tanzania, before jetting off to the Seychelles.

When he proposed to her, George Clooney cooked for Amal at his L.A. mansion and presented her with a seven-carat emerald cut diamond and platinum ring, which he designed himself. 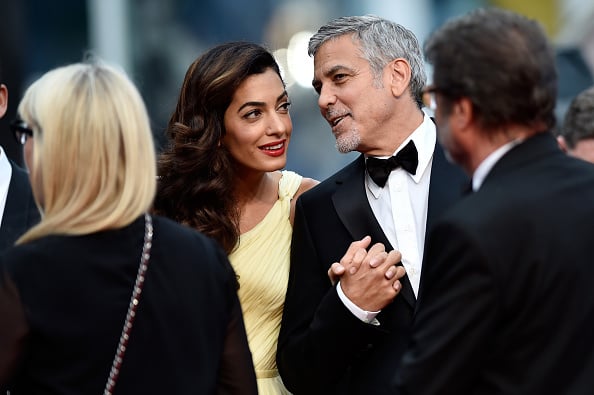 The couple got married on September 27, 2014 in Venice’s City Hall, officiated by Walter Velteroni, a former mayor of Rome and friend of George Clooney. In October 2014, it was revealed that the pair bought the Mill House on an island in the River Thames at Sonning Eye in England, and reportedly paid around $10.0 million for it!

Photos of Amal Clooney have been circulating, showing what people are saying is a baby bump, thus questioning whether or not Amal Clooney is pregnant. Although the couple has not confirmed the news, an insider revealed that they are expecting twins. If this is true, being a parent would be a first for both George and Amal, and neither of them has ever had any children. However, the same source claims that the twins are due in March, and based on Amal Clooney’s latest pictures, she doesn’t seem to be that far along yet. Though the question of baby Clooneys running around is still in the air, we are hoping to have confirmation soon!