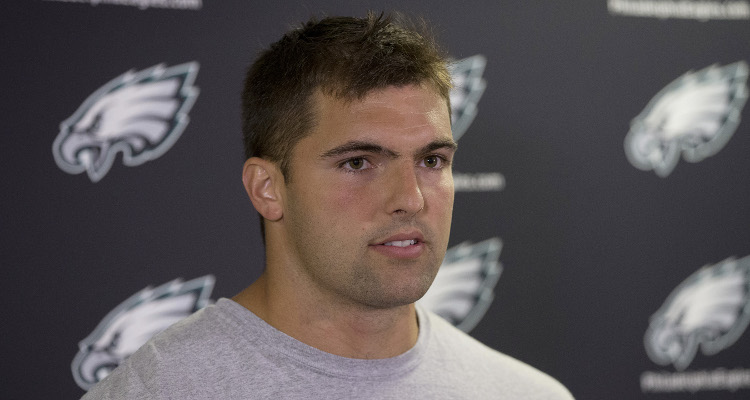 NFL players staged a mass protest against President Trump’s Twitter rant on Sunday (September 24). While more players knelt or locked arms during the national anthem, the Pittsburgh Steelers decided to stay in the locker room or out of sight in the tunnel. Nonetheless, one Steeler emerged with a hand over his heart and stood for the duration of the “Star Spangled Banner:” offensive tackle, Alejandro Villanueva. He’s both being lauded and criticized for his actions. But before you judge him, you need to know about this remarkable player in Alejandro Villanueva’s wiki.

#1. He Has Spanish Heritage

The Spanish-American was born in a Naval Air Station in Meridian, Mississippi where his father was stationed with Spanish forces. His father, Ignacio Villanueva, was a Spanish Naval officer who worked for NATO and married a Spanish woman, Matilda Martin. The 6’9” footballer inherited his parents’ tall genes. He also has three younger siblings, Paloma, Inaki, and Carmen.

Growing up in Rhode Island, Spain, and Belgium, Villanueva didn’t always play football. In Spain, rugby was the preferred family sport. His brother, Inaki went on to play rugby professionally for Spain’s national team. It was only in Belgium, when he attended the U.S. Dept. of Defense’s SHAPE High School, that he fell in love with football.

After graduating from West Point with a degree in systems engineering, Villanueva was faced with the dual career options of the NFL or the military. He thought that if he didn’t get picked in the NFL draft, he’d fall back on his military plan. Though he spent some time with the Cincinnati Bengals, he went undrafted.

In some ways, not getting drafted worked for him. He had his heart set on following his fellow graduates and honoring his commitment to the army. “That’s where I wanted to be. I wanted to serve, I wanted to see combat. I was actually trying to get as many deployments as I could, and see it with different units. That’s where my mind and my heart was,” said Villanueva. The 29-year-old was a decorated captain in the U.S. Army where he served as an Army Ranger.

#3. He Saved His Comrades

There’s a reason why Villanueva is the best offensive tackle in the league: he’s pretty adept at protecting his team in the gridiron as he did in combat. He served three tours in Afghanistan and collected seven different decorations from the Rangers, Combat Infantrymen, and the Parachutist division.

The former Ranger was part of a team that rescued wounded soldiers while under enemy fire. He actually helped soldiers return to their families and was rewarded with the Bronze Star for valor for his service.

#4. He Tried for the NFL Again

After four years in the military, Villanueva tried for the NFL again. No longer eligible for the NFL draft, he paid $245.00 to attend a regional combine in Georgia. He was among 240 prospects for the super regional combine. After a meeting with the Philadelphia Eagles, he was signed as defensive end in 2014—the team’s second veteran since Chad Hall from the Air Force.

A few months later, he caught the eye of Pittsburgh Steelers head coach, Mike Tomlin. After he was waived by the Eagles, the Steelers swooped in and signed him to their practice squad. He soon muscled his way to an offensive position. Within a year, he gained around 100 lbs, his tall and hefty build making him a strong tackle. He made his debut in the 2015 season and in 2017, signed a four-year extension worth $24.0 million.

Villanueva puts his commitment to his country over all else, which is why he chose not to take a knee or stay inside the locker room during the national anthem. But he has vocally expressed solidarity with players like Colin Kaepernick and decried social injustice. Since he was the lone Pittsburgh player who didn’t “bend the knee,” his jersey sales have skyrocketed. He’s the third highest Steeler in jersey sales and among the top sellers currently in the league.

Steelers opponents, the Chicago Bears, marked their opinion by linking arms during the anthem. The Steelers were in the locker room or inside the tunnel out of sight, except for Villanueva. Coach Mike Tomlin supported the team’s decision to skip the anthem, adding that “If a guy wants to go about his normal business and participate in the anthem, he shouldn’t be forced to choose sides.”

#5. He Met His Wife Through a Teammate

Villanueva married Madelyn Muldoon in a small ceremony in his parents’ backyard in 2013. Madelyn’s brother, Joe Muldoon, was Villanueva’s teammate in the Army Black Knights and it was through him that they met.

Joe would bring Alejandro to his parents’ home in Bowie, Maryland to spend Thanksgiving and Easter. Back then, he saw her as Maddy, Joe’s baby sister. It wasn’t until she grew up, graduated college, and visited Villanueva when he returned from Afghanistan in 2012 that he took a romantic interest in her.

They fell in love and dated, but Villanueva was a still a little afraid of Joe. It was only when a wounded Joe was visited by Maddy when he had to return to the U.S. that he understood these two were going to marry one day. As Joe predicted, his best friend and his sister soon tied the knot.

“Getting to the NFL has been a challenge and an adventure,” said Madelyn, “but at the end of the day, he’s most proud of what he’s done on the battlefield.” After he was signed to the NFL, Maddy and Alejandro sealed the deal with a grander ceremony in 2015.