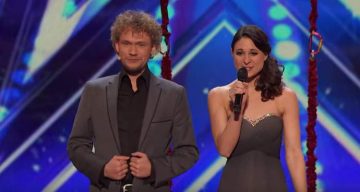 The Clairvoyants are made up of Thommy Ten and Amelie van Tass. They come from the picturesque city of Vienna, Austria. They travel all over the world to perform their tricks in front of audiences, including a variety of shows, galas, cruise ship shows and corporate events. Now, they are conquering America with their intriguing performances on America’s Got Talent 2016.

Thommy Ten thinks of his craft as ‘entertainment for a new generation.’ He is ably helped by Amelie in this. Their performance ranges from short magical pieces to full length shows. At the World Championships of Magic in 2015, they were chosen to be the ‘World Champions of Mentalism.’ This was the first time in 30 years that this award has been given!

Amelie van Tass has always loved performing, right back to the time she was very young. She graduated as a professional dancer from the MoveOn Dance Center in Vienna in the year 2010. There at the Center, Amelie became passionate about performing arts and illusions. In fact, Amelie claims she is the only legitimate female clairvoyant in the world. Along with Thommy, Amelie dazzles her audiences with their neat tricks. Amelie attributes her ability to her strong sense of intuition.

A typical trick is what they did at the AGT auditions. Thommy asked Heidi Klum to pick any random item from her purse. Amelie, who was blind folded, correctly guessed the information about the item Heidi chose, which was a lipstick. Amelie also guessed correct information about a phone being carried by a member of the audience! Needless to say, all the judges were more than impressed and voted a big ‘yes’ for The Clairvoyants to move to the next round.

Though most of the people have no clue about how The Clairvoyants pull off their tricks, some viewers claim they have figured out their secrets. After all, The Clairvoyants seem to be able to read minds and they know things that are not possible to know. One viewer’s theory in his own words is, “They do it with a $200 device from a magic supplier called a Thumper. It transmits Morse code via vibrations. What they do takes ridiculous amounts of practice. If I were them I would have slipped an earpiece in while putting on the blindfold but that wasn’t their method. He’s most likely triggering the thumper with his foot, but you could also do it with an accomplice.”

Another viewer has a similar theory. He says that the duo is using Morse code to communicate details of their tricks. For example, he taps his foot and that sends vibrations to the seat where Amelie is sitting. Amelie gets the vibrations, which are basically messages in Morse code and answers correctly. They do it so well that nobody has been able to spot it. Yet.

So, are The Clairvoyants for real? They’re real entertaining, that’s for sure! Their magic tricks and performances on the America’s Got Talent stage have kept the viewers and judges guessing, and that’s why many have become fans of their “magic.” As to how they do it, no one has been able to actually crack their methods, and let’s be real, The Clairvoyants themselves are never going to reveal their secrets! After all, magicians never tell!