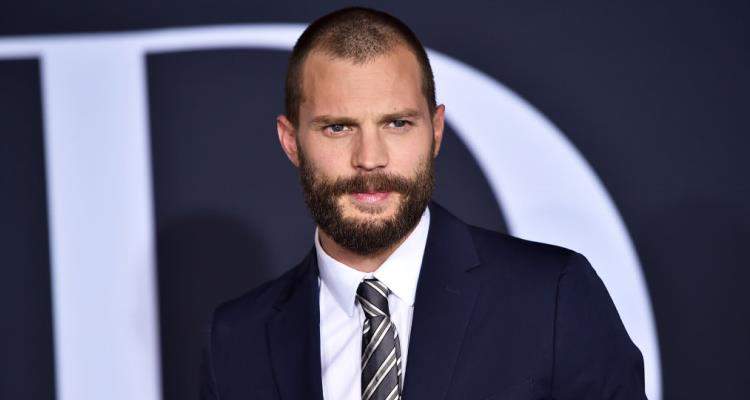 Who’s on your “hot list” when it comes to famous people from Ireland? Well, we certainly know who’s on ours! We have six hot Irish celebrities to tell you about, who will likely have you wishing you were sipping green beer together! So, let’s get this VIP guest list ready for our imaginary St. Paddy’s party…

St. Patrick’s Day is a time to party. And who better to party with than our favorite hot Irish celebrities? Even if it’s only in our dreams! So, let’s get the party started by honoring Ireland and all the wonders it offers—specifically the Irish celebrities who give us heart palpitations! We don’t know what it is about the Irish—whether it’s the lilting accent, the innate charm, or a special twinkle in their eyes—but most of us can’t get enough of them! We don’t know who you’re inviting to your St. Paddy’s shindig, but here’s who’d be on our dream list…

There’s no better place to start a “hot Irish celebrities” list than with an Irish beauty who’s making waves in the modeling world! And she’s a gourmet cook, too—who wouldn’t want her at their party cookin’ up a fresh Irish stew?

Rozanna Purcell, aka Roz, is a 24-year-old Irish model. She hails from Fethard, County in Tipperary, Ireland.

The gorgeous blue-eyed lass competed as Miss Universe Ireland in 2010 at the Miss Universe 2010 pageant in the U.S. She didn’t win, but impressively ranked in the top 10. She even got Trump’s attention—his modeling agency signed her immediately!

Since then, she’s been working as a model and making television appearances, like on Ireland’s Celebrity Chef.

Purcell is more than just a pretty face; she’s now a best-selling author! Her first cookbook, Half Hour Hero, was published in 2015. She is obsessed with food and health, as is made apparent by her food blog, naturalbornfeeder.com.

This busy woman also runs her own clothing label, Scribe by Roz. In fact, she has a new collection of designer suits coming out in October.

Purcell dated Irish musician Niall Breslin from 2013 to 2016, but she seems to be single at the moment. So…who wants to get on a plane to Ireland? 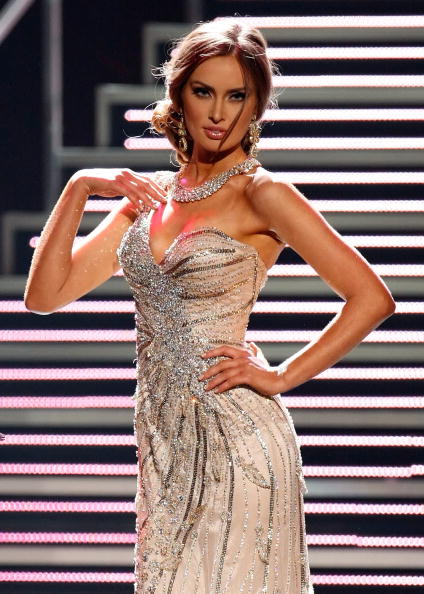 Can you say “Fifty Shades of Sexy?!” Actor Jamie Dornan was born May 1, 1982, in Belfast, Northern Ireland.

Of course, Dornan is best known for his portrayal of the enigmatic and sexy businessman with a dark side, Christian Grey, in Fifty Shades of Grey. The movie was a major box office success, despite all the negative press. We’re sure he had something to do with it!

Few Dornan fans would be surprised to know that he started out as a model in 2001. He’s lent his lean and sculpted physique to plenty of major fashion houses, including Abercrombie & Fitch, Hugo Boss, Armani, and Calvin Klein.

True to his Irish roots, he’s also a big music lover. Dornan sang in Sons of Jim, a folk band, until 2008. A musician? That makes him the life of the party, in our books!

He’s been acting in film and TV since 2006. His first notable role was as The Huntsman on the TV series Once Upon a Time from 2011-2013. But Dornan really got everyone’s attention in 2015 with the first of the three Fifty Shades movies. Other movie credits under his belt include Anthropoid, The 9th Life of Louis Drax, and the upcoming Robin Hood, in which he plays Will Scarlett. Plus, the Irish actor starred as serial killer Paul Spector on a TV series called The Fall from 2013 to 2016. 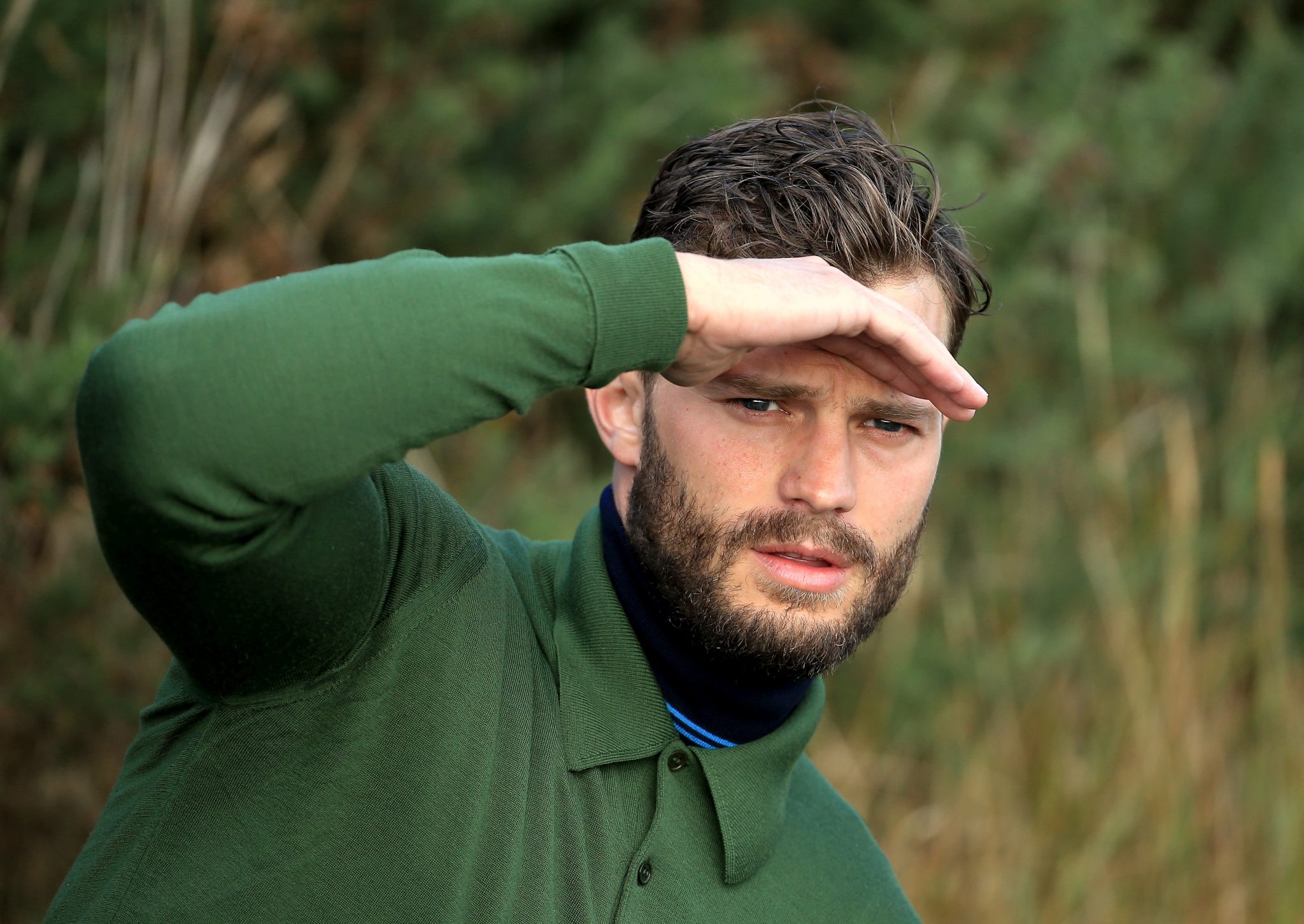 According to Dornan, he came by his lean and muscular physique through sports, especially rugby. (Ahh…a true Irish sportsman!)

“Because I used to play a lot of sport, I’ve always been in decent enough shape. When I used to get asked to do a bit of body work before a photo shoot I’d lie and say, ‘Yeah, I’m going to the gym.’ I literally never did anything.”

Dornan’s also a big golfer. In fact, the photo we have for you today is of Jamie Dornan—looking steamy and intense—playing at the 2015 Alfred Dunhill Links Championship at Kingsbarns, Scotland, on October 3, 2015. Doesn’t he look dapper on the golf course? 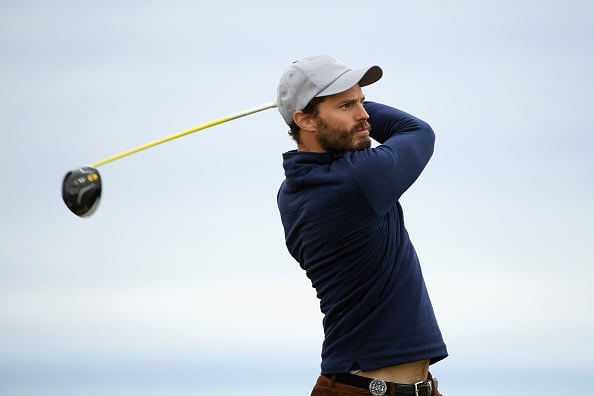 If you like your crushes to have substance, do we have the celebrity for you! Born April 12, 1994, Saoirse Ronan is an Irish-American actress. At the young age of 23, she is not only lovely to look upon, but she’s an acting powerhouse! This intelligent young lady would be an excellent conversationalist to have at any St. Patrick’s party.

Ronan was born to Irish parents in the Bronx, New York. When she was three years old, her parents brought her back to Ireland to live. She spent most of her youth in and around Dublin—hence her lovely accent!

Ronan began her acting career at the age of nine, in an Irish medical drama. Her breakthrough role came not long after in 2007 with the movie Atonement.

It was only her second film and she was nominated for the Academy Award for Best Actress for it. Wow!

The Irish actress has continued with pithy, strong, and complex roles since that time, including films such as The Lovely Bones, Hanna, The Grand Budapest Hotel, Brooklyn, and Lady Bird. She also starred in The Crucible on Broadway. And you can see Ronan featured in Ed Sheeran’s “Galway Girl” video!

She hasn’t even reached a quarter of a century and this Irish beauty has already been piling on the accolades. In 2018, Ronan won the Golden Globe for Best Actress in a Motion Picture – Musical or Comedy for her role in Lady Bird. Ronan has been nominated for three Academy Awards, four British Academy Film Awards, two Golden Globe Awards, four Screen Actor Guild Awards…and the list goes on and on. 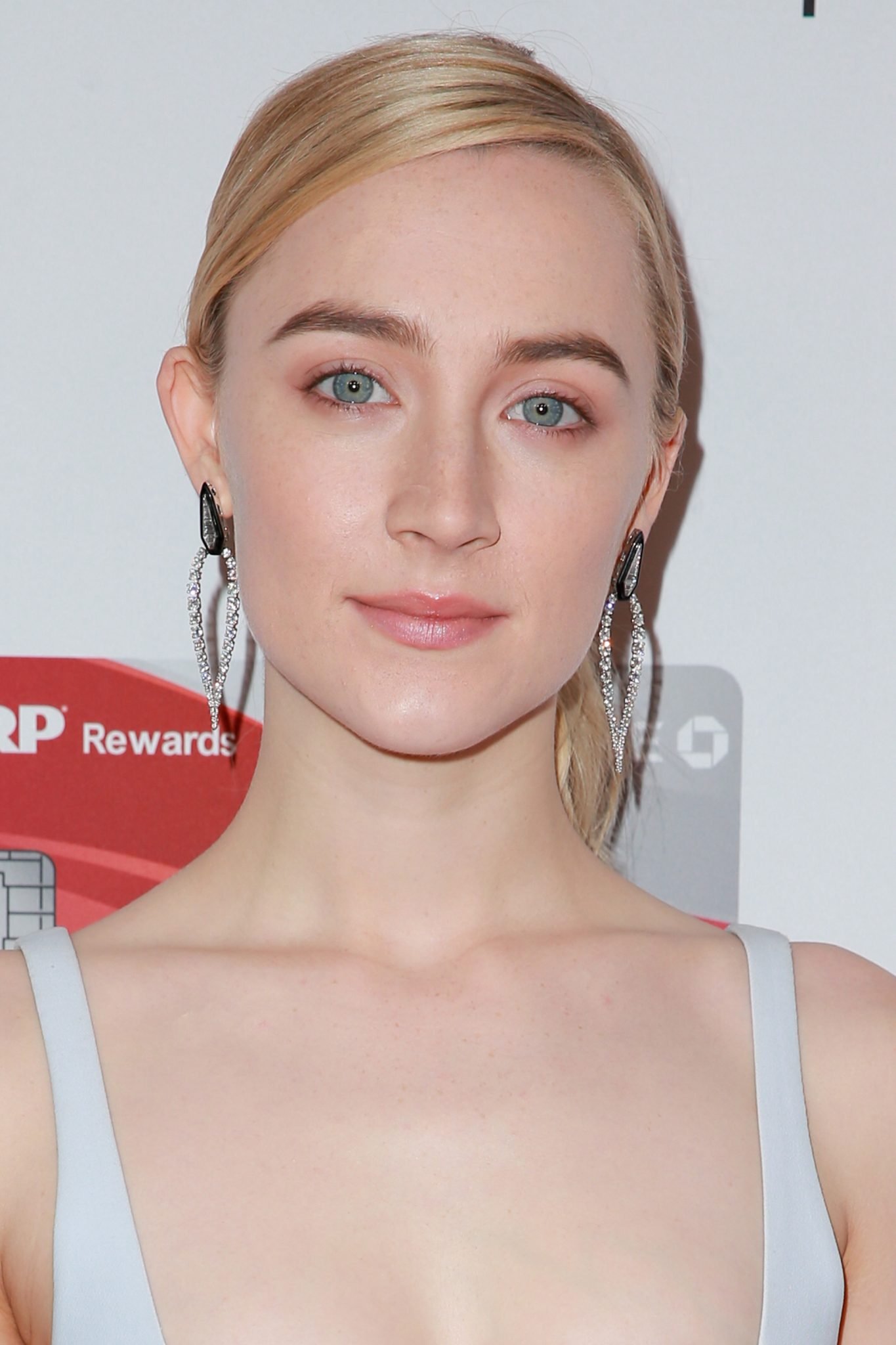 Ronan is not your typical “hot” Hollywood starlet; her looks can be described as radiant and ethereal. And she strives to play intelligent, strong female characters. She told Time, “It’s even more important now that there’s such a massive shift towards feminism that men and women see strong, complex women onscreen.”

Ronan is currently back in her homeland, living in Greystones, County Wicklow, Ireland. She’s single, so all of her American admirers are holding their breath until she comes back to visit or work again! 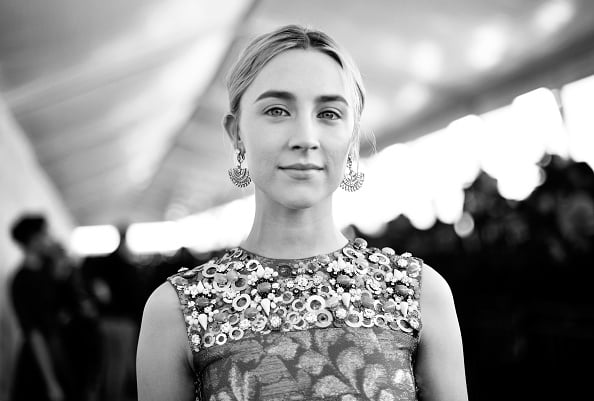 Colin O’Donoghue is our next pick for our “Hot Irish Party” guest list. If you’ve seen him as the charming rogue Captain Hook, you’ll know why!

This Irish actor was born on January 26, 1981, in Drogheda, County Louth, Ireland, where he grew up Roman Catholic. Before he caught his big break with a feature film in 2011, you could catch O’Donoghue playing guitar with the five-piece Irish band he co-founded, The Enemies.

O’Donoghue made his first TV appearance in an Irish TV mini-series called Rebel Heart in 2001. He’s been in a variety of TV shows, TV movies, and shorts since then, including The Clinic and The Tudors. His hard work started to pay off even more when he starred in the 2011 movie The Rite, alongside veteran actor Anthony Hopkins.

You can also catch O’Donoghue in Christina Perri’s 2014 video for “The Words.”

But the role this handsome Irishman is most known for is Captain Killian “Hook” Jones in TV’s Once Upon a Time. He’s been a regular on the series since 2012. Now that it’s wrapping up with the series finale in May 2018, fans can’t wait to see what O’Donoghue will do next.

Sorry, folks; this dark-haired, blue-eyed hottie is married with two children, a boy and a girl. His wife of six years is Helen O’Donoghue. We’ll still invite him to our imaginary St. Patrick’s celebration though.

Our next hot Irish celebrity, Ruth Negga, has that sexy-cool vibe down, especially in her latest TV role.

Negga was born in Addis Ababa, Ethiopia on January 7, 1982. But lived in Limerick, Ireland from age four on. Her father is Ethiopian and her mother is Irish.

Negga has a long list of TV and film appearances going back to 2004. You might know her best as Raina in TV series Agents of S.H.I.E.L.D. (2013-2015), as Mildred in the movie Loving, or as Lady Taria in the Warcraft: The Beginning movie.

However, the recent role that has her on everyone’s radar is Tulip O’Hare in the quirky TV series, Preacher. We think the dark, dangerous, and sexy character suits Negga very well!

If you thought you had a chance with this Ethiopian-Irish beauty, you’re in for disappointment. Negga has been in a relationship since 2010 with her Preacher co-star, Dominic Edward Cooper. Cooper plays title character, Jesse Custer. The pair now lives together in London, England. We suppose they can both come to our St. Patrick’s party… 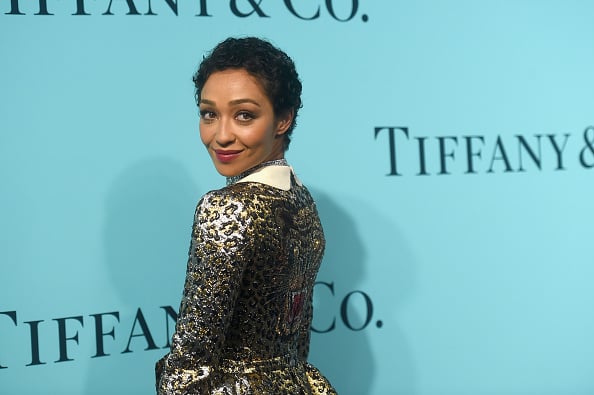 If you like the bad boy look—and muscles, lots of muscles—mixed martial artist and boxer, Conor McGregor should be your Irish celebrity of choice! Not only can he speak some Gaelic (swoon!), but he can also do his country proud in the ring. 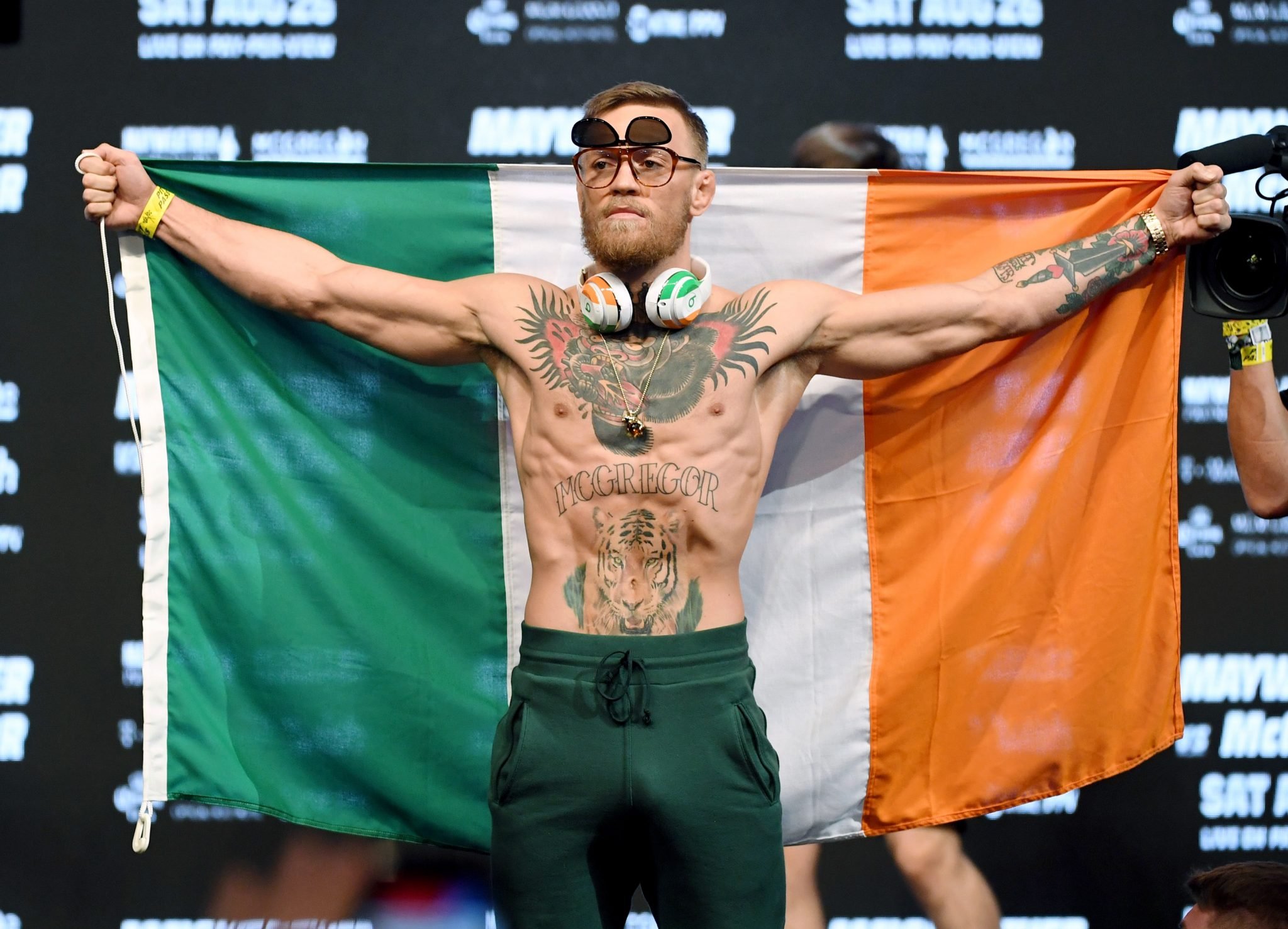 And we think he could really get our celebrity St. Patrick’s party going, with his crazy antics—and he’s all about his country’s pride!

Conor Anthony McGregor was born on July 14, 1988, in Crumlin, a suburb of Dublin, Ireland.

McGregor started training in boxing when he was 12 years old. As a teenager, he moved to a different suburb of Dublin, Lucan, where he turned his attention to mixed martial arts (MMA).

McGregor has been competing in MMA on a professional level since 2008. He won the CWFC Featherweight and Lightweight championships in 2011/2012.

After his MMA success, the Irish fighter signed a contact with the Ultimate Fighting Championship in 2013. He went on to become the current UFC lightweight champion and (now former) featherweight champion. He is #2 on the UFC pound-for-pound rankings.

In 2017, McGregor famously tried his hand at boxing. He signed up for the much-anticipated Las Vegas super welterweight boxing match against Floyd Mayweather Jr. He put up an impressive fight, but Mayweather defeated him with a technical knockout.

But there’s more to this Irish boxer than his aggressive and stubborn fighting style. He was also voted “Ireland’s Most Stylish Man” at the VIP Style Awards in 2015. He certainly likes to step out in style, in his many different suits. Who remembers the famous “F*** You” suit?

With his sexy tattoos and ridiculously sculpted fighter’s body, McGregor is on many people’s hot lists. But this Irish catch has been snatched up already! He’s been with his girlfriend Dee Devlin since 2008. Devlin gave birth to their son, Conor Jack McGregor Jr., on May 5, 2017. But we can still gawk at his Irish hotness, right? 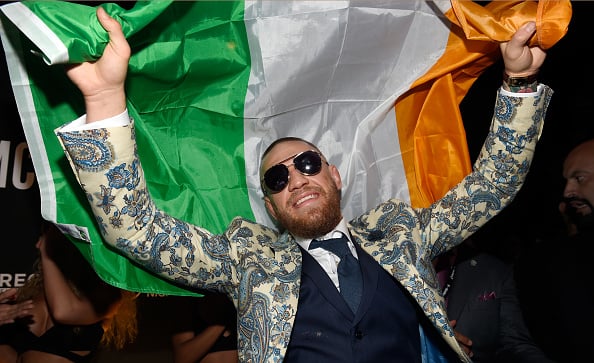