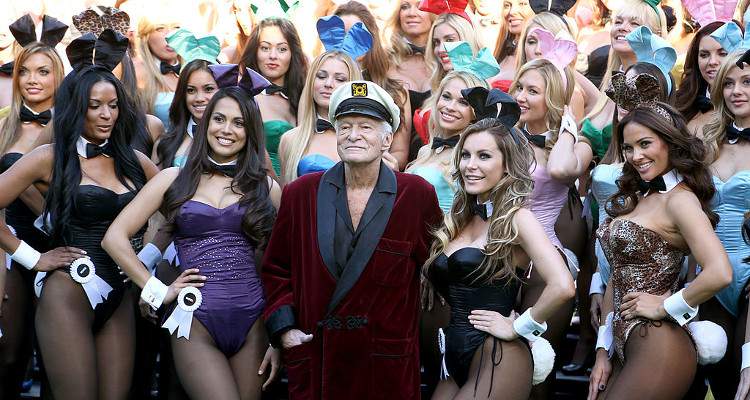 Hugh Hefner, the man who founded Playboy and turned hedonism into a business empire, passed away on September 27, at the age of 91. It’s no surprise that he accumulated a lot of wealth in his lifetime. His net worth at the time of his death was estimated at $50.0 million.

The godfather of the Playboy empire, Hugh Hefner passed away on Wednesday. Pop culture’s face of sex leaves behind his trademark silk robes, the iconic Playboy Mansion, a million-dollar business empire, and countless mourning Playmates.

Hefner’s life was a rags-to-riches story of selling a taboo subject and growing it into one of the greatest influences of pop culture, making him a millionaire. Keep reading to find out how he built the Playboy empire.

From Radical to Mainstream

At the time of his death, Hugh Hefner’s net worth was estimated at $50.0 million. However, at the peak of Playboy’s success, he was worth $200.0 million. The arrival of the Internet impacted Playboy’s business, but there was a time when grown men and sneaky teenage boys would rush to get their hands on the magazine.

According to some reports, Playboy was making $12.0 million a year, selling 7 million copies in the ‘70s, which is the equivalent of over $70.0 million today. The magazine’s success was helped by the rising sexual revolution aided by the likes of Marilyn Monroe, who broke barriers to become a sex symbol. But the liberal magazine also gave the movement a push, and Hefner’s once-considered radical views on sexuality became mainstream.

Hefner took a bold risk, but he knew he needed more than photographs of nude women to sell the magazine. He added depth to its content, publishing stories no other magazine would. A lesser-known fact is that the magazine has a long history of publishing short stories by some of the greatest writers like Ian Fleming, Vladimir Nabokov, P.G. Wodehouse, Margaret Atwood, and more.

Charles Beaumont’s piece, The Crooked Man, was rejected by Esquire for its content on homosexuality, but Hefner published the short story and even slammed the criticism against it.

How Rich Was Hugh Hefner?

In 2009, Hefner disclosed his financial records during divorce proceedings, which gave an astonishing picture of this party animal. The following table illustrates his income according to his records:

And here’s how he broke down his monthly expenditures:

The Internet provided free pornography which diminished the sales of Playboy. In a bid to save the company, Hefner let private equity firms buy it. Hefner owned 35% of the Playboy brand and 100% of the actual magazine.

The magazine is still a thriving business valued at $500.0 million. Although its sales suffered, the Playboy brand was far more valuable. The brand expanded by licensing its iconic bunny symbol to companies to sell products like Playboy water, clothing lines, toy cars, and a TV network. Playboy also has a chain of clubs to go with the brand.

There’s no bigger example of Hefner’s decadence than the iconic Playboy Mansion where his beautiful bunnies lived, hosting over-the-top parties. We got insight into Hef’s lifestyle in the mansion and his slew of ladies in the reality series, The Girl Next Door which ran for six seasons.

The 50,000-square-foot mansion boasts 29 rooms, a zoo, wine cellar, home theater, tennis court, and an infamous swimming pool with a cave-like grotto where he hosted his parties. The home is not technically Hefner’s but Playboy Enterprises’. Hefner paid around $1.0 million in annual rent to cover all the expenses.

In the last few years, Playmates confessed that the mansion had become decrepit and hard to maintain. Daren Metropoulos, the son of billionaire business tycoon, Dean C. Metropoulous, bought the mansion for $100.0 million in 2016.

The private equity mogul’s son made restorations to the property and brought it to its former glory. Although the mansion was no longer owned by Playboy, the sale came with a stipulation that allowed Hefner to stay there for as long as he lived.

And he did. Hugh Hefner passed away on Wednesday of natural causes at his home, the Playboy Mansion. He is survived by four children—Cooper, Marston, Christie, and David.