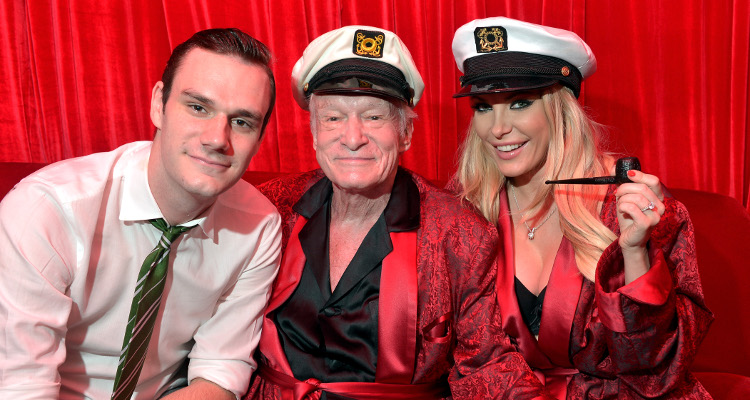 It’s been an amazing journey for Hugh Hefner since he founded Playboy in 1953. And, he debuted it with a bang by featuring Marilyn Monroe on the cover of the magazine’s first issue.

The millionaire who made his living selling racy magazines passed away peacefully in his beloved Beverly Hills, California mansion. He left behind a legacy that will now likely be taken over by his children.

Cooper Hefner is the current Chief Creative Officer at Playboy Enterprises. Here are five things you need to know about Cooper Hefner’s wiki.

#1. He Is the Son of Hugh Hefner’s Second Wife

Hugh Hefner married three women in his life: Millie Williams, Kimberley Conrad, and Crystal Harris. He tied the knot with Kimberley Conrad in 1989, and they had two boys: Cooper and Marston. Cooper’s parents separated just under a decade after getting married, but their divorce wasn’t finalized until 2010.

Cooper Hefner spoke to the New York Post about his childhood, and how he would shuttle between his mother’s and father’s homes. When Hugh Hefner and Kimberley Conrad separated, she moved in right next to the Playboy Mansion. And the younger Hefner recalled how he would spend his time in both homes, enjoying his dad’s parties like no other kid could!

#2. Cooper Hefner’s Older Brother Is Not into Playboy

You would’ve thought that the heirs to the dream Playboy kingdom would consider themselves lucky. But Hugh Hefner’s third child, Marston Hefner, doesn’t seem to agree according to sources.

Cooper Hefner, on the other hand, took the reigns when he was 21 years old, and tried to change up the magazine’s marketing strategies. Although he wasn’t successful at first, he now made a place for himself in the company.

#3. Cooper Hefner Is Engaged to a Harry Potter Actress

Cooper Hefner is now engaged to actress Scarlett Byrne, who played the spiteful Pansy Parkinson in Harry Potter. Hefner is a traditional person, so before he could pop the question, he flew Byrne to her home in London so that he could ask her father for permission.

Cooper Hefner is deeply saddened by the loss of his father. The 26-year-old said, “My father lived an exceptional and impactful life as a media and cultural pioneer and a leading voice behind some of the most significant social and cultural movements of our time in advocating free speech, civil rights and sexual freedom.” He continued, “He defined a lifestyle and ethos that lie at the heart of the Playboy brand, one of the most recognizable and enduring in history.”

Cheese on the mind and on the head. Throwing back to the 90's when every boy in LA rocked those long locks. Happy Fathers Day, Dad #Cheesehead

#5. What Is Cooper Hefner’s Net Worth?

Although we are unclear as to how much the CCO of Playboy Enterprises makes now, we do know that his father, Hugh Hefner’s net worth was a whopping $50.0 million! Hefner owned a mansion which he sold for $100.0 million and reportedly earned more than $3.0 million as his annual income.